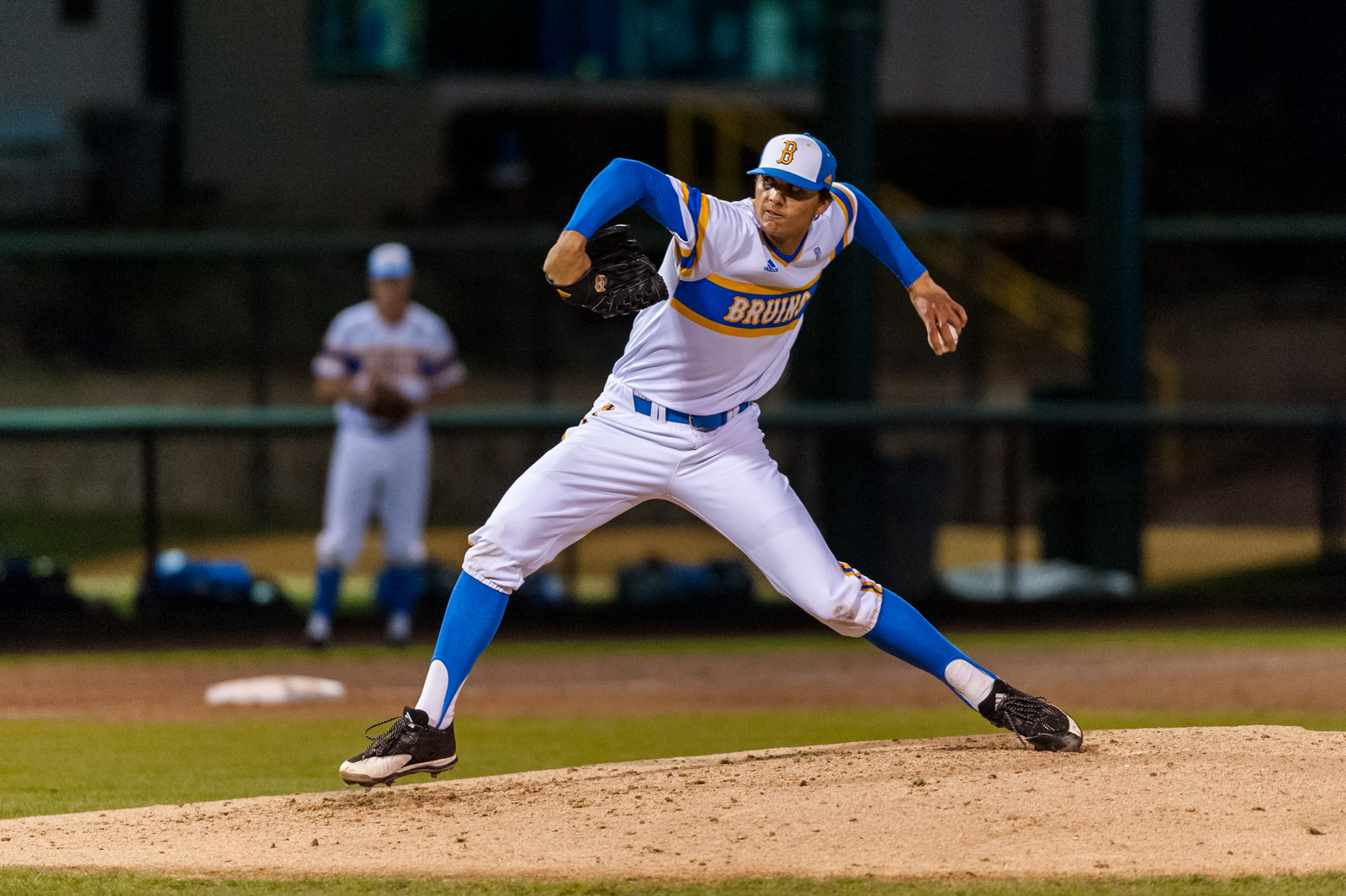 Justin Hooper was supposed to start Tuesday’s game, but the rotation got moved around due to rain. Nevertheless, the sophomore lefty came on in relief and pitched 4 1/3 hitless innings with 10 strikeouts. (Jintak Han/Assistant Photo editor)

Tuesday night, UCLA baseball saw the Justin Hooper that they have been waiting for. The sophomore lefty entered the game in the fourth and struck out 10 of the first 13 batters he faced.

“That was a breakout session,” said coach John Savage. “If anybody was at the ballgame tonight, I think they saw a guy who might have arrived.”

Savage called Hooper’s four innings the most impressive he’s seen in quite a while, but the dominant stretch wasn’t enough to give the Bruins a win Tuesday night. UCLA (2-1) fell to UC Riverside (2-1) by a score of 3-2.

After recording a strikeout in the eighth, Hooper gave up back-to-back walks. A passed ball allowed the runners to move to second and third with only one out. Savage called in sophomore closer Brian Gadsby to close out the inning and preserve the Bruins 2-0 lead.

Gadsby allowed an RBI ground-out to make it a one-run game. Next, UC Riverside’s Mark Contreras stepped up to the plate with two out and sent a towering fly ball over the right field wall putting the Highlanders up 3-2 in the top of the eighth.

“It just kind of slipped away from us in the eighth,” said sophomore catcher Gavin Johns. “Contreras took advantage of the 3-2 slider and took of advantage of us leaving it up.”

“You know, a guy that we didn’t want to let beat us beat us, and that’s what can’t happen,” Savage said. “You can’t let that guy beat you there. And he did.”

UCLA controlled the game until the eighth inning.

Sophomore right-hander Jon Olsen started the game with three scoreless innings. Olsen gave up a leadoff single in the first inning and a walk to the first two UC Riverside hitters. The next hitter smacked a line drive right at junior first baseman Sean Bouchard, who tagged a Highlander base runner to complete a double play.

The Bruins scored their first run of the game in the second inning when sophomore center fielder Daniel Amaral snuck a single up the middle, sending freshman third baseman Ryan Kreidler home.

The Bruins added their second run in the sixth when the bases were loaded for catcher Gavin Johns.

An infield single from redshirt sophomore Nick Valaika and a single into center field from junior first baseman Sean Bouchard put runners on first and second with nobody out. A sacrifice bunt from freshman Chase Strumpf put the runners in the corner and freshman third baseman Ryan Kreidler’s walk loaded the bases for Johns.

Johns sent a high line drive to center field and allowed Valaika to tag from third and score, giving the Bruins a 2-0 cushion they would later squander.

Nonetheless, Hooper’s 4 1/3 inning, 10-strikeout performance indicates that UCLA has begun to harness some of the lefty’s potential.

“I was just making pitches and trying to go compete,” Hooper said. “Just an attack-mode mindset. Definitely fun being out there for the first time for this season.”

The Bruins will face the unranked Gonzaga Bulldogs for a three-game series starting Friday.