Wang’s Word: Lonzo Ball is the best candidate for the Naismith Trophy 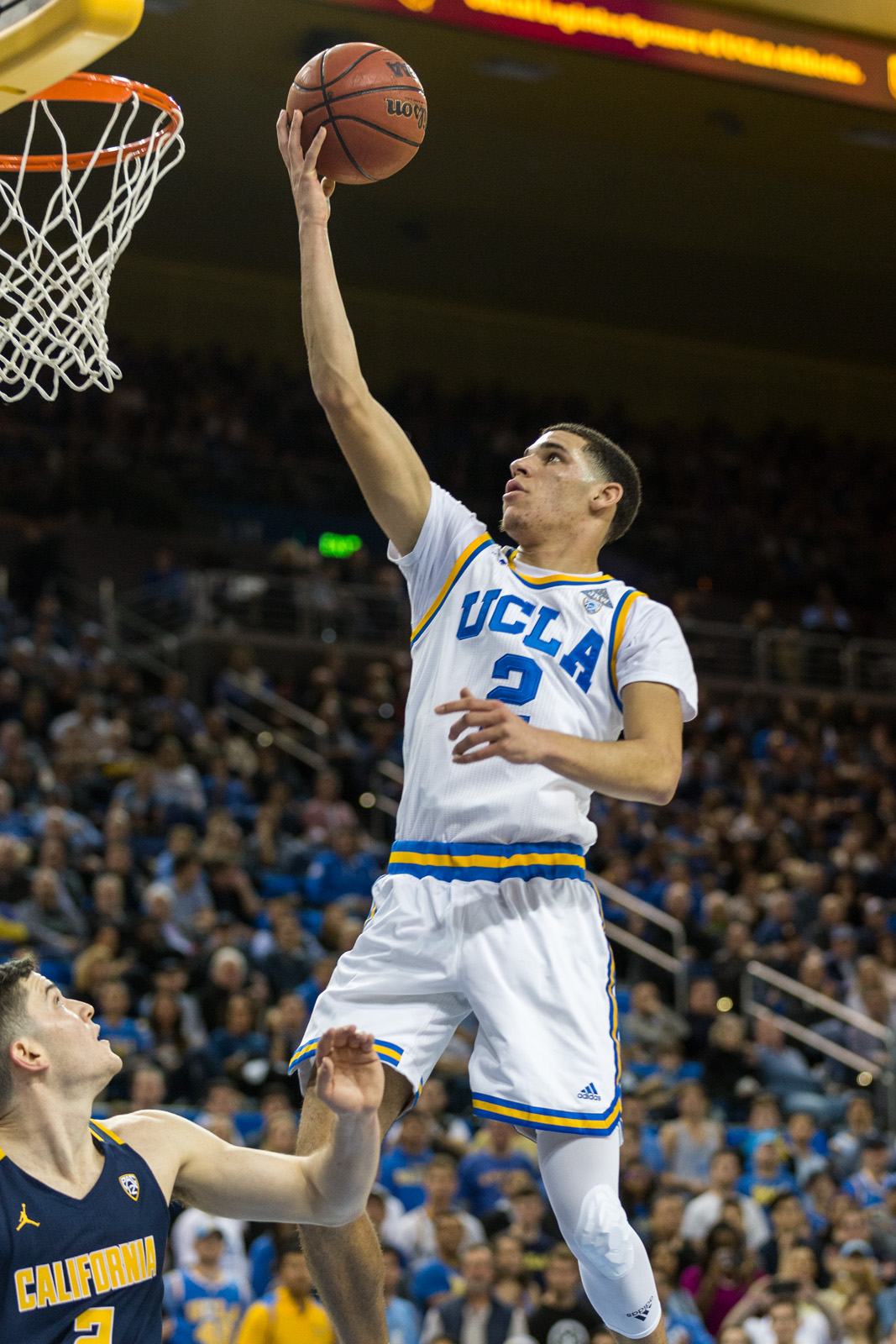 Lonzo Ball is among the top candidates to win the Naismith Trophy, given annually to college basketball’s player of the year. The freshman guard is averaging 15.1 points and 7.8 assists per game this season. (Jintak Han/Assistant Photo editor)

The midseason top-30 candidates for the Naismith Men’s College Player of the Year Trophy will be announced Thursday, but one player should top the list.

Sorry, Frank Mason III and Josh Hart, but UCLA’s freshman point guard has been the best player in the country this season.

Let’s start with the basics – while Ball’s 15.1 points, 7.8 assists and 5.8 rebounds per game are not the most outstanding stats out of all the top players, he is the engine behind the nation’s most efficient and by far most exciting offense. With highlight reel dunks, NBA-range 3-pointers and Golden State-esque ball movement, the Bruins have rarely been stopped by their opponents.

And that’s because of Ball.

The freshman has an uncanny ability to find the open man on the floor, leading to easy points such as the alley-oop to freshman forward T.J. Leaf in the first half of Saturday’s game.

Lonzo Ball spots TJ Leaf halfway through his shot and lobs it to Leaf for the jam. pic.twitter.com/HZPy0XO5xn

Even if he isn’t shooting well, Ball has the confidence to take shots and pull the Bruins out of offensive slumps. When UCLA needs him to close out games or halves, it turns to Ball and his favorite weapon, the stepback 3-pointer.

When the pressure is on Ball, he knows how to push through and win. The Kentucky game was Ball’s spotlight moment thus far; in one of the toughest road environments in college basketball, he made several deep 3s, then shushed the crowd with his finger.

That’s national player of the year swagger right there.

And he won’t back down against opposing teams’ top players either. Take a look at Saturday’s game against Washington and its freshman guard, potential No. 1 draft pick Markelle Fultz.

Ball started the game playing man-on-man defense against Fultz, and minutes into the game, Ball blocked Fultz and drove past him for an easy layup.

The man is impossible to game plan against. Play off him, and he’ll drain 3-pointers like Steph Curry. Play in his face, and he’ll break your ankles like John Wall and drive for a layup, or dish to a wide-open shooter in the corner.

While Hart and Mason are generally considered favorites for the Naismith Trophy, Ball has something on both of them – youth. Age isn’t usually a metric used to measure a player’s greatness, but in Ball’s case you have to consider it.

Other freshmen such as Fultz or Kentucky’s Malik Monk can match and even surpass Ball’s scoring prowess, but neither can create opportunities like the UCLA guard. Ball leads the country with 188 assists and is on pace to pass NBA Hall of Famer Gary Payton’s Pac-12 freshman record of 229 assists in a season.

Ball often gets compared to NBA legends Jason Kidd, Penny Hardaway and Magic Johnson, but he’s primed to do something they’ve never done.