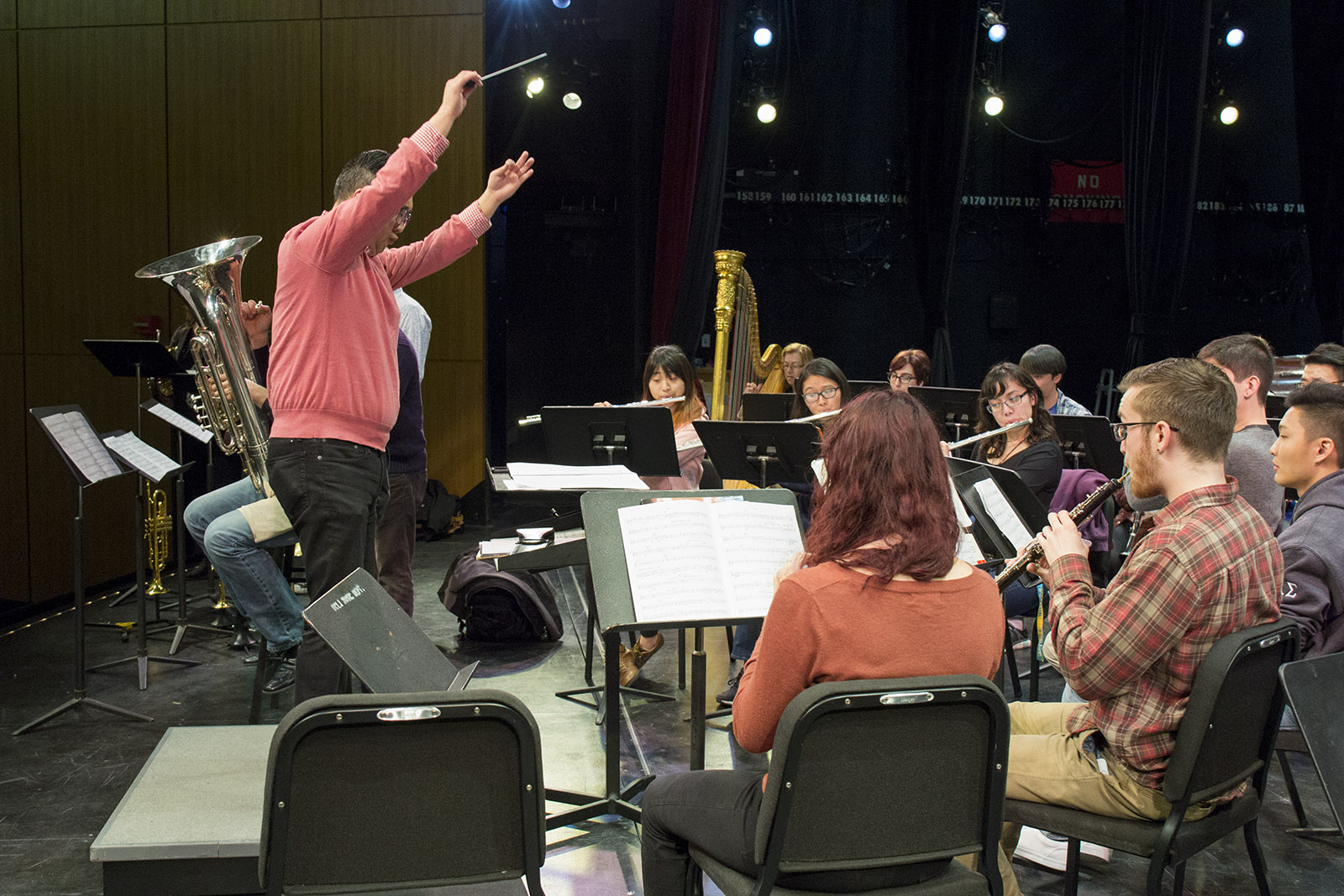 Travis J. Cross said a person’s interpretation of a composition is like an alternative fact – every single person in an audience has an entirely different experience hearing the same piece of music.

With the current political climate in mind, Cross will conduct the UCLA Wind Ensemble’s winter concert in Schoenberg Hall on Monday. The music department vice chair and associate professor of music titled the show “Political Overtures,” as it explores the music of Leonard Bernstein and Dmitri Shostakovich, composers who created music in response to the politics of their times.

The politically charged works of the concert are meant to provoke discussion and dialogue among concertgoers about art as a reaction to current events, allowing listeners to each have independent responses based on their perceptions of the music, Cross said.

“It’s not our job to try to make people think a certain thing or react a certain way,” Cross said. “It’s our job to interpret what the composer has given us to the best of our ability and then let the audience reach their own conclusions.”

Bernstein, an American composer who was primarily active during the second half of the 20th century, wrote the hit broadway musical “Westside Story.” Cross considers him the best-known classical musician in America. The musician often composed pieces for the Kennedy family before and after President John F. Kennedy’s death and wrote music responding to the political transition from 1950s to 1960s America.

“Political Overtures” contains two pieces from Bernstein: “Slava!,” inspired by his musical “1600 Pennsylvania Avenue,” and a suite from “Mass,” commissioned by Jackie Kennedy for the opening of the John F. Kennedy Center for the Performing Arts in 1971.

While Bernstein experienced freedom of expression in crafting his often-controversial pieces, Cross said Shostakovich was oppressed by the Stalinist regime in Soviet Russia. He said Shostakovich was often scorned by society for not displaying enough Russian patriotism in his music during the first half of the 20th century.

Shostakovich’s “Prelude Op. 34, No. 14” and “Festive Overture” will be showcased by the Wind Ensemble.

To add another reactionary perspective to the five-piece repertoire of “Political Overtures,” Cross also included Frank Ticheli’s 2008 orchestral work “An American Elegy,” a response to the Columbine High School mass shooting in 1999.

“Each (composer) deals with the things around them in different ways, and that’s what’s interesting as an artist and a musician,” Cross said.

The overriding theme of “Political Overtures” is artists reacting to events that are larger than themselves, Cross said.

“I am not trying to communicate a message,” Cross said. “But, if the concert reminds us that art thrives always and that artists have a responsibility to express and to speak and to create, I wouldn’t be unhappy.”

Cross finalized the repertoire in November, following the 2016 presidential election. He said the Wind Ensemble’s concert does not have a political agenda it is trying to impose on audience members, so his personal views regarding the 2016 election results are not reflected in the chosen pieces from Bernstein and Shostakovich.

However, the inspiration for “Political Overtures” was inspired by the general pathos involved in the election season, he said.

“(The election) was something that was on everybody’s mind,” Cross said. “I’m sure it’s a natural reaction to wanting to contribute to the dialogue and help ask questions.”

Art has historically been a way to express emotion regarding social change, said graduate student David Blumenthal, an assistant conductor for the Wind Ensemble. Blumenthal describes Shostakovich’s “Prelude Op. 34, No. 14” as a reaction to Soviet Russia, and the composition has dark and ominous tones, which the audience can hear even without being told the history of the piece.

In performing the pieces of political reactionary artists, Cross said the only way to play the music is artistically. The political messages of the compositions cannot be conveyed to the audience, as music is interpreted separately by different people.

However, contrasting the music of Bernstein, Shostakovich and Ticheli is a call for the audience to analyze how performers choose to react to their surroundings, Cross said.

“The juxtaposition of the pieces is what asks some questions,” Cross said. “The way that you play middle C or high B-flat, three eighth notes or a major chord, isn’t really influenced by any sort of viewpoint or agenda, nor should it be.”

The messages of the pieces are secondary to the music, said Nicole Galisatus, a third-year music and architectural studies student who plays the clarinet for the Wind Ensemble. The political context of the composers provides interesting background knowledge for both the musicians and the audience, but are ultimately less important than the music itself, she said.

The works of the American and Russian composers are thematically different, Cross said, because they are responding to three different climates – Soviet Russia, America in the 1960s and the Columbine shooting. Regardless, each composition is a reflection of the musical community’s ability to express thoughts and feelings with its craft.

“Composers and performers live in the world they live in,” Cross said. “The music we make is a response to, sometimes a judgment on and ultimately a wish for what our world is.”