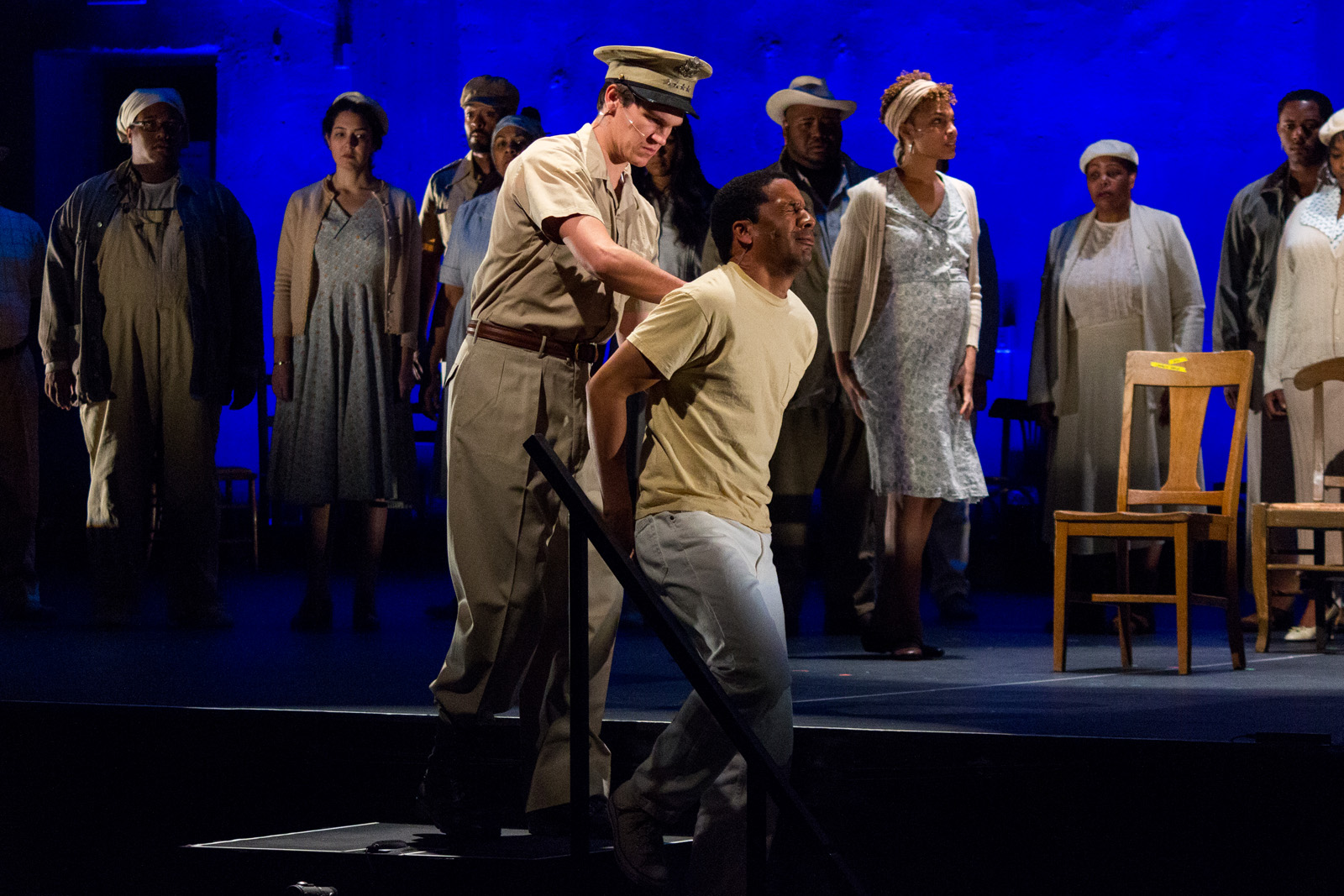 The musical “Lost in the Stars” by Kurt Weill, set in South Africa during apartheid, raises contemporary issues of race relations and inequality. (Sihui Song/Daily Bruin)

"Lost in the Stars" Center for the Art of Performance at UCLA Royce Hall Saturday 8 p.m. and Sunday 7 p.m. $15

New York-based theater group SITI Company will be performing Kurt Weill’s 1949 musical “Lost in the Stars” at Royce Hall on Saturday and Sunday, featuring a chorus including several UCLA students and alumni.

This will be the first professional production of this play in Los Angeles since the 1950s, said Jeffrey Kahane, the show’s conductor and Los Angeles Chamber Orchestra music director. The apartheid-era story and genre-crossing music of “Lost in the Stars” are timeless, carrying the eternal message of racial struggles that can still be felt today, said Chris Hunter, a fourth-year music student and chorister.

The play, set during the South African apartheid during the second half of the 20th century, tells the tale of a black priest’s son, who robs a white man’s house, shoots him and is hung.

The plot can be connected to the racial inequality that is still an issue today in the United States, said Dominic Delzompo, a 2016 alumnus and member of the chorus.

“Even 50 years later, people are still treated unfairly because of their skin tones,” Delzompo said. “It is a very timely piece.”

Kahane teamed up with Anne Bogart, co-artistic director of SITI Company, and David Roussève, choreographer and interim dean of the School of the Arts and Architecture, to bring the show to the Royce Hall stage. Working with them required adapting to a balance between the musical and storytelling aspects of the piece, said Zuri Adele, a performer in the show and 2015 alumna.

Adele, a theatrical actress, said she was not used to working in musical theater but came to realize that the music of “Lost in the Stars” made for a more passionate telling of the story’s narrative. The play travels through many different styles of music, from jazz to gospel to opera, Delzompo said. He added blending different musical styles in the show represents the way people of different backgrounds should blend together today.

While this is a musical about South Africa, Bogart chose to have the performers use American dialect for the story to better resonate with the American audience, Adele said. The sensitive but timely topic of race relations needed to be anchored back to contemporary times and a familiar space, she added.

The racial relations of apartheid are directly reflected in the staging of “Lost in the Stars,” said David Childs, an ensemble member and 2016 alumnus.

The chorus is literally segregated onstage: at many points in the play, the white and black actors physically separate, which is a visual embodiment of the racial tension already present in the plot, Hunter said.

In rehearsal, Bogart marked a line down the center of the stage to divide the characters in various scenes, depending on whether the scene captured a black or white character’s perspective, Hunter said.

The play’s story made Hunter reflect on today’s racial problems, which he feels are at times overlooked, and better understand where these problems stemmed from.

“This play is so relevant it could have come out yesterday,” Hunter said.

For Adele, the violence of the story resonates with the Black Lives Matter movement today and the way that she has seen law enforcement treat black men and people of color, she said.

“We are rehearsing with the underscore of Trump’s inauguration, so we are aware of that somber feeling within our space of the rehearsal process,” Adele said. “No matter any way people have voted, race has always been a tense subject.”

“Lost in the Stars” touches on other controversial topics like the death penalty, when the protagonist is hanged by the end of the play. These are issues that were present during the apartheid and still plague society today, she said. The play feels like both a form of resistance as well as a coming together with the community to explore social injustices in 2017.

Childs said the play resonates with him because he comes from a Jewish background and feels a connection to the musical’s Jewish composer Kurt Weill, who faced anti-Semitism himself during World War II and fled Nazi persecution to come to the United States, where he then wrote “Lost in the Stars.”

The plot’s focus on social injustice, by showing a young black boy being unfairly treated during apartheid, has made Hunter aware of the privileges he has today, as he never faced such racial discrimination, he said. He added this play is about connecting with other human beings, helping them break free from bubbles of ignorance.

“In some ways, I wish that everyone could come see this show, especially at UCLA, which is such a socially open and accepting campus,” Hunter said.

With racial divisions Childs said he feels are still so present today, “Lost in the Stars” explains that humans must do the right thing, not based on labels or race, but for the goodness of man.

“The message of this play is an eternal message – it was a message that was valid in the ’50s, that is valid today and will still be valid in 100 years,” Hunter said. “It is timeless.”