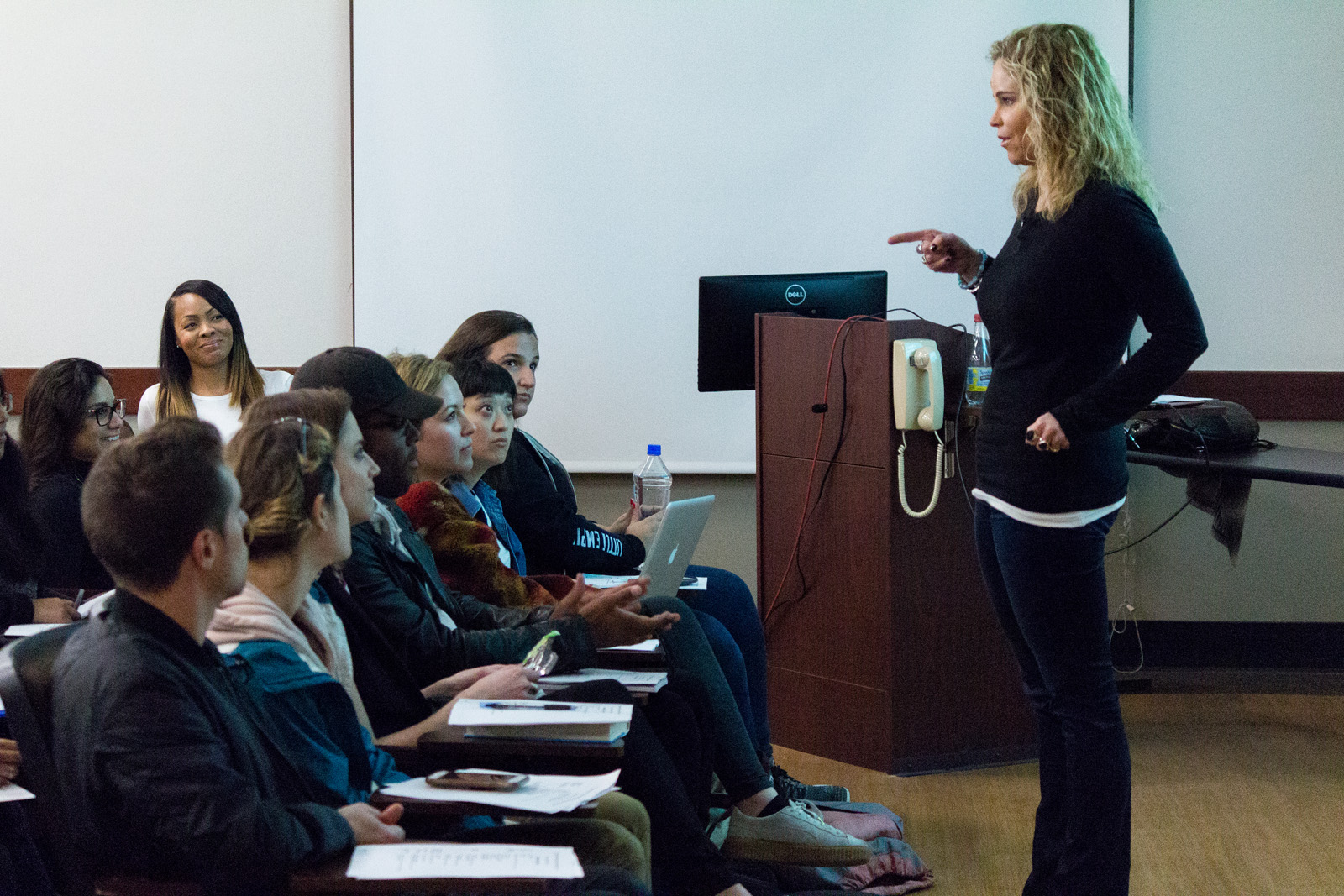 Correction: Due to an editing error, Thomas Ertzeid Gulseth was incorrectly quoted.

But instead of being mesmerized by the voices of today’s top musicians, students are immersed in Dina LaPolt’s lectures about the music industry.

She is a powerhouse and an inspiration, said her student Thomas Ertzeid Gulseth. After LaPolt’s three-hour lecture, he said he left the class in awe.

LaPolt, the owner of LaPolt Law, P.C., has taught the course “Legal and Practical Aspects of the Music Business” at UCLA Extension’s entertainment studies department since 2001 – this quarter marks the 17th time she has taught the class.

Topics covered within the course include landing record deals and publishing, licensing and copyrighting music. Using her experience as a full-time attorney, she intends to teach her students – both law students and working music professionals alike – about the legal and business processes behind today’s music.

On the first day of class this week, LaPolt stood at the front of the room wearing a grey-and-white-striped coat. To her right on a podium lay her laptop and a bottle of water, which decreased in volume as the three hours passed.

Her confident New York accent and passion for the music industry captivated her audience. Amidst taking notes, students laughed at LaPolt’s candid personal stories of negotiating deals with record labels and artists. She encouraged her students to talk to each other from across the room and told them the music business is like the Wild West.

Thirty percent of students in her class are UCLA students seeking a music undergraduate degree, a music business certificate from UCLA Extension or a law degree, LaPolt said. The remainder of students are those already established in the music business, including music publishers, record industry executives and agents who want to learn about what is changing in the industry.

LaPolt said her favorite part about teaching the class is the fact that most of her students are already in the music industry and bring their excitement with their professional work to the classroom.

“People only learn from subjects they like,” LaPolt said. “You can’t really teach someone something when they have no passion.”

Although copyright, trademark and right to publicity laws have remained largely the same over time, LaPolt said the music business itself is fast-paced and ever-changing due to the continual advances in technology.

LaPolt said it is important for music lawyers to be aware of the changing landscape of how music is produced and shared in order for them to guide their clients in business transactions.

“Six months ago in the music industry is outdated,” she added.

Andy Vargas, the lead singer of the band Santana, began his music career at age 16 with LaPolt as his first attorney and is now enrolled in her extension class. He gathered a majority of his knowledge of the industry through firsthand experiences as an artist, but said LaPolt’s class provides a formal way to further his music industry education.

“I hope to fill in the gaps … to get a refresh of the music business and see how everything has changed,” Vargas said.

Vargas told Jennifer Valkana, secretary of Vargas Entertainment, about LaPolt’s class four years ago. Valkana, who is now also a student in the extension class, said this was the first year the two of them had time in their schedules to take the class together.

Valkana hopes to learn about the logistics of what she calls the “big machine” that is the music business. Although she has a broad understanding of its operations, she hopes LaPolt will be able to provide a deeper comprehension.

“I listen to the conversations. Now I can actually understand and be a part of it,” Valkana said.

“I went into this class expecting something somewhat dry that you might expect out of a legal class,” Gulseth said. “It was a three-hour show, really.”

Aside from viewing LaPolt as a role model, Gulseth said he is looking forward to learning from his classmates who work for major industry companies, including Apple Music and Live Nation.

“So many parts of the business are represented not only through the lecture, but through other students in the class.” Gulseth said. “You just talk to someone in the break and you learn something new.”

LaPolt said her students’ involvement in the industry allows the class to be exposed to various areas of expertise and offers the opportunity for students to learn from each other. During Gulseth’s first class, he said he spoke with a music producer from the United Kingdom about the publishing world.

The best way to learn music law is to learn from someone who has been successful in the business, LaPolt said. She lectures about what she does every day as a practicing lawyer, giving her students firsthand information, she said.

“With me being adjunct (at UCLA), my full-time job is being a music lawyer representing music creators,” LaPolt said. “So when I’m teaching the class, it’s in real time.”