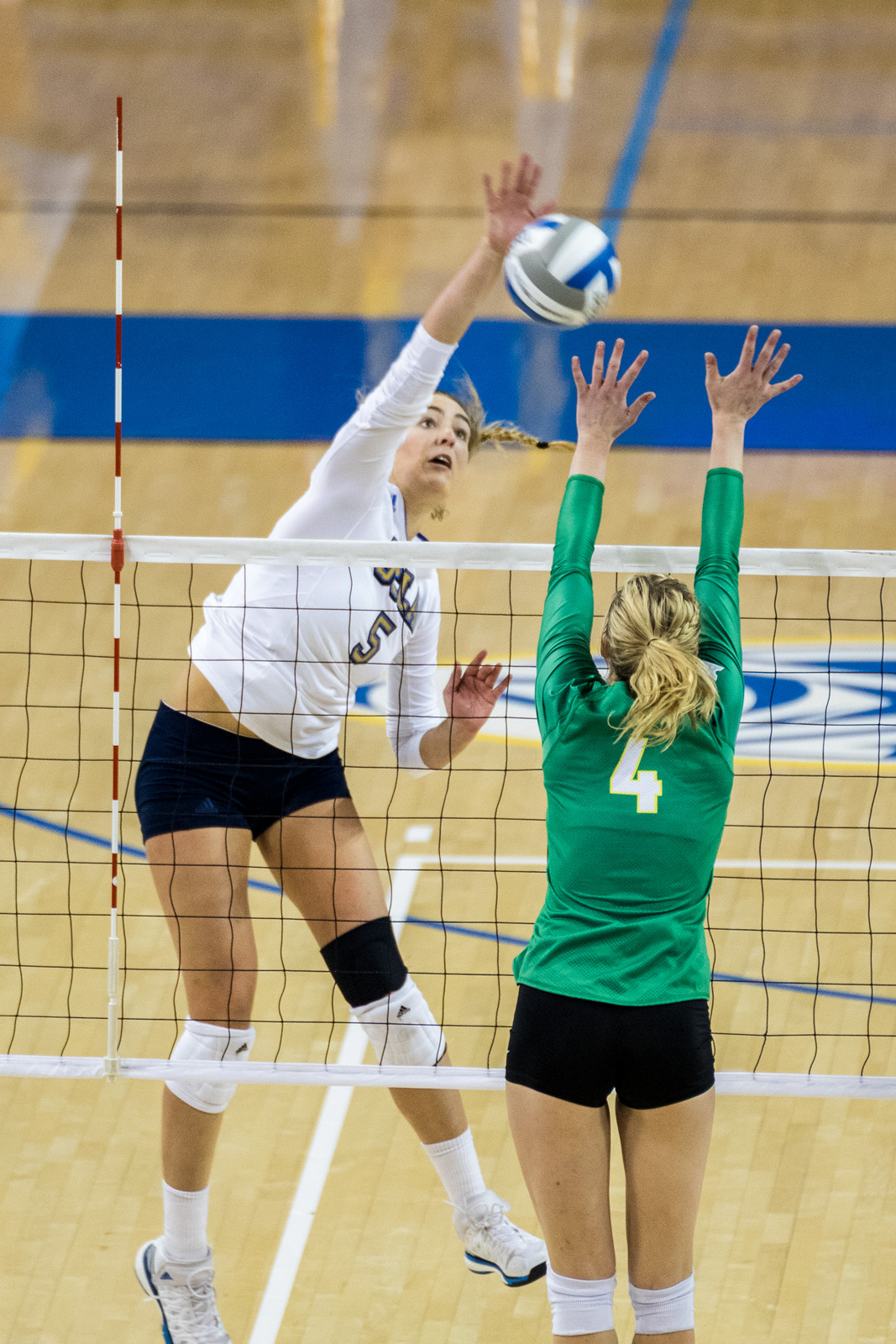 Playoff anxiety might have cost UCLA the first set of the first round Friday night, but since then the Bruins have shown why they earned the No. 10 seed.

“Today we just wanted to take it to them after last night,” said junior pin hitter Reily Buechler. “We wanted to get rid of those jitters, and we were more settled in.”

Following Friday’s four-set win against Murray State, UCLA women’s volleyball swept Baylor on Saturday to advance to the round of 16 in the NCAA Tournament.

The Bruins never trailed on their way to taking the first set 25-21. UCLA had its biggest lead of the set at 18-12, but Baylor won eight of the next 10 points to tie the game at 20.

Freshman pin hitter Torrey Van Winden notched her first kill of the match to break the tie, and had two more kills in the final four points to seal the set for the Bruins, who closed out game one with a 5-1 run. Buechler and Van Winden finished the match first and second on the team in kills with 13 and 12.

“These are the two players that have the biggest role on the team as far as they’re the primary attackers, and they’re playing six rotations,” said coach Michael Sealy. “The two-setter offense does distribute a lot of pressure … but these two more than anybody else have a big, big role.”

The Bruins first took the lead at 8-7 in set two and extended that lead to as many as seven points. UCLA hit .372 on the set, including a set-high seven kills from Van Winden. UCLA took the set 25-20 on a kill by senior middle blocker Jennie Frager.

Set three featured eight lead changes, but the Bruins maintained the lead for the remainder of the set after senior middle blocker Claire Felix hit a slide straight down the sideline to tie the game at 17. Neither team led by more than two points in the third set until a kill by Buechler put the Bruins ahead 22-19.

“I’ve always felt that second round has a lot more pressure than sweet sixteen and on, so it was really good that the girls were able to execute in a tough environment,” Sealy said. “In that second round if you’re a seed, then you’re supposed to (win). Once you go to a sweet 16 round, its like ‘Hey, everybody’s good,’ and you just kind of go fight.”

The Bruins will now travel to Minneapolis, Minnesota, to face No. 7 seed North Carolina on Friday in the round of 16.

The NCAA finals won’t be the only finals UCLA has to worry about going forward.

With finals week starting Sunday, Buechler said that she and her teammates have 17 total finals that they will need to take in Minnesota. Players will send emails in the hours following the match to coordinate with proctors and professors, said Buechler and Van Winden.