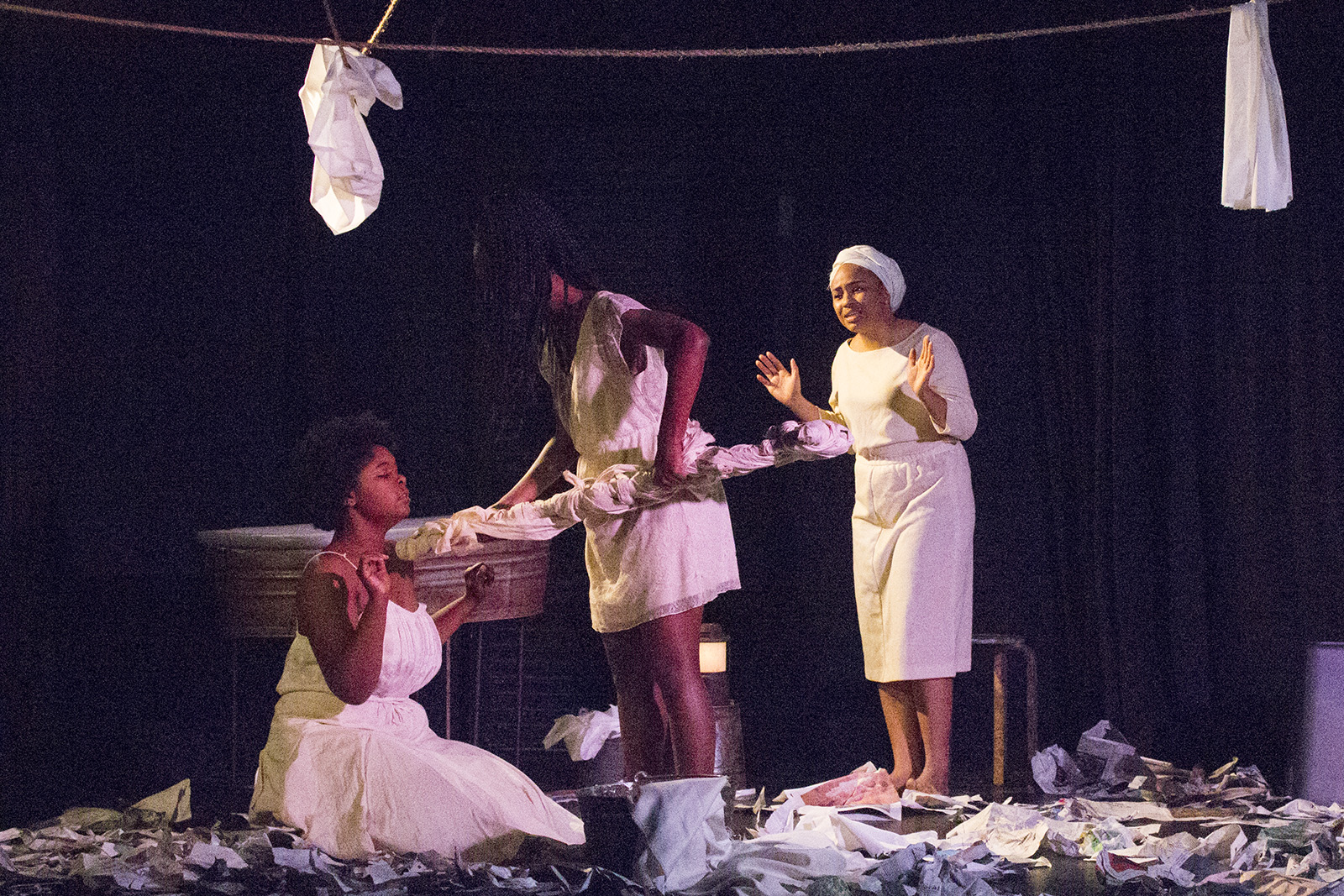 Jayongela Wilder is tired of seeing women in film and theater portrayed as fragile wives, submissive maids or incompetent lovers.

Wilder, a graduate student in theater, seeks to change the stereotypical depiction presented in film and theater by directing “Eclipsed,” a play that tracks the tribulations and survival stories of five Liberian women during the Second Liberian Civil War. The play’s story focuses on the lack of power granted to women in the realms of politics, education and the media, and will premiere Thursday at MacGowan Hall.

The play was originally written by actress and playwright Danai Gurira and premiered in 2015.

After Wilder put out the casting call for the production, she explained to the group of women who came to audition the importance of having African-American women out on the stage, she said.

“When I saw (the cast members) come into the room, there was something that changed in that room, and I was in tears,” Wilder said. “It was so amazing to see so many African-American women on stage together, and the important part of this project is that we are saying something special about women, and telling a story that has never been told.”

Before casting the play, Wilder went on a search for real-life stories about powerful yet victimized women that were untold in media representations.

The research led her to books and videos that recounted the efforts of Liberian women and the hardships they endured during the four-year Second Liberian Civil War, during which they were robbed of their possessions, families and homes.

The brutal experiences the Liberian women went through during the war, such as being abducted and raped, forced them into a period of isolation resulting in a numbness to their situations, Wilder said. She said the unjust experiences they faced during the war are mirrored in the actresses’ performances.

“These women have become desensitized to what’s going on,” Wilder said. “It takes them a second to recall how long they have been trapped at the army camp, and they forget that they were stripped away from their families and taken against their will.”

In “Eclipsed,” The Girl – the name of the lead character – gets abducted and raped by a commanding officer after he discovers her in hiding. The Girl comes across a bag filled with stolen clothes layered on top of a book. The Girl is left with two choices of what to take with her: the book – a symbol of the power of education – and a gun given to her by Maima, a Liberian woman and soldier who has been fighting for her freedom on the battlefield.

Choosing the book represents the necessity for African-American women to educate themselves in order to be sources of change in the industries in which they often lack authority, she said.

The Girl, who yearns for an education that will eventually lead her to a position in parliament, is hindered by the upheaval of war and inability to access schooling.

“In that moment when (The Girl’s) back is up against the wall, I can see how maybe the gun is her only form of power,” Wilder said. “But, ultimately, education is the most powerful route to go because knowledge is something you can constantly give away, but that you will still always have.”

Wilder gave second-year theater student Autumn Sylve, who plays The Girl, the opportunity to choose the ending that she feels is most empowering to her during that particular performance. This option allows Sylve to choose which assertion of authority she feels is most powerful according to the journey she goes through during a specific show, Sylve said.

“Eclipsed” ties into the current divided social climate where many minorities feel unsure about their future, because women in the play have been erased of who they are as human beings, Sylve said. In the play, they are trying to take control and make their mark on the world.

Wilder wants “Eclipsed” to facilitate questions about the power of women to unite in times of social and political turbulence, she said.

“Eclipsed” presents a theme of sisterhood within the African-American community that has been lacking in the theater department, said Deja Fields, a second-year theater student who plays Bessie, another Liberian woman in the play shackled by the confines of the war.

“This play really showcases minorities in a different light and shows that women can endure anything,” Fields said. “It’s amazing that it’s an all-female cast that really sheds light on the concept of sisterhood.”