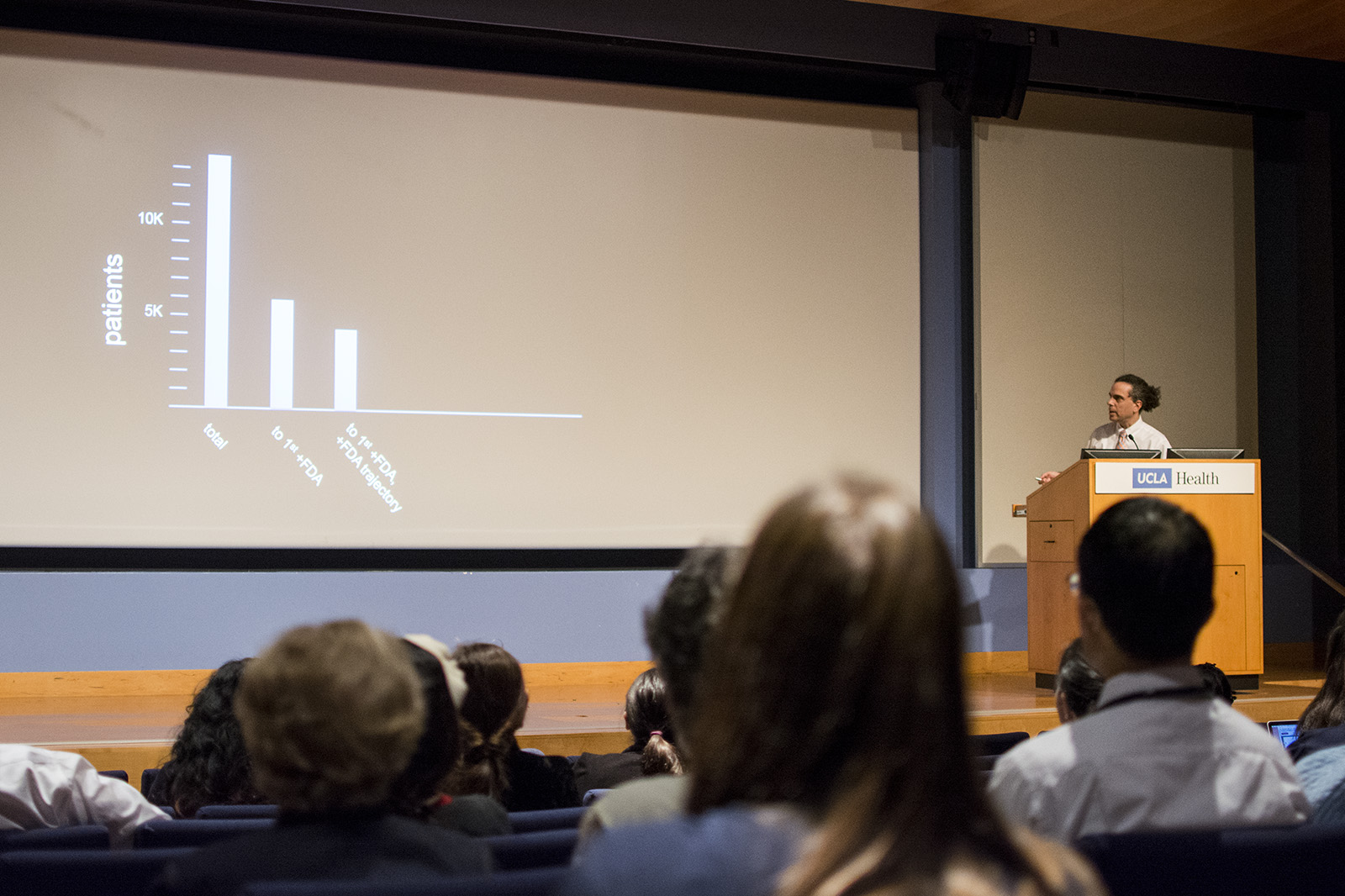 One academic believes that an excessive amount of resources is wasted on the hasty pursuance of drug trials, which don’t always generate conclusive results. However, UCLA Health officials think that the drug approval process is relatively efficient.

In his lecture, Kimmelman said that all drugs are required to go through three successive rounds of clinical trials, and drugs that don’t show signs of toxicity then undergo review by the Food and Drug Administration prior to approval. As of July, the FDA had 4,036 drug applications pending for approval.

Kimmelman analyzed the clinical trials of various cancer drugs and concluded that ethical issues are often caused by inefficiencies in trial procedures.

He said researchers sometimes only test a disease-curing drug within a two-week time period, and often do not investigate the performance of the drug in a slightly longer durations.

He said he thinks the scientific community spends too much time debating the number of subjects that should be used in each drug trial, because he thinks the number of subjects doesn’t significantly change the outcome. He said that instead, researchers should focus on taking breaks between trials to evaluate each outcome and decide whether to pursue additional clinical trials.

According to the FDA, the first phase of drug trials involves testing the new drug on healthy volunteers over a span of several months. If the new drug does not show signs of toxicity in healthy subjects, it then undergoes phase two testing, which involves testing on patients over a period of up to two years. Once the drug passes phase two, it undergoes clinical testing with a larger number of volunteers diagnosed with the particular disease over a period of one to four years.

If a new drug becomes FDA-approved for a certain treatment, it is up to the drug companies to decide whether to put the drug under additional testing to extend its label, Kimmelman said. Extending a drug’s label means repurposing a drug that is already FDA-approved for other forms of treatment.

“Further exploration (of drugs that are already FDA-approved) is almost always fruitless,” Kimmelman said. “Drug developers are efficient in first licenses, but (are) extremely inefficient in extending label(s) of FDA-approved drugs to other indications.”

Typically, there is high risk of generating inconclusive results when conducting multiple drug trials concurrently, Kimmelman said. But he said he thinks drug developers feel more comfortable testing the drug on multiple medical symptoms once it is FDA-approved.

Kimmelman believes that when companies test FDA-approved drugs on multiple symptoms, they use more human capital and have to increase drug prices.

However, Edward Garon, a hematology and oncology physician at the Ronald Reagan UCLA Medical Center, said he thinks further explorations of drugs actually lowers the expenses of drug development.

“You are evaluating the same drug that is already approved in a different population, so the barriers are less,” Garon said. “The expense is less, because you don’t need to convince the FDA, because that is already done leading to the approval.”

President-elect Donald Trump said one of his goals for the first 100 days he is in office is to speed up the FDA drug approval process. Kimmelman said he was skeptical of Trump’s plan.

“This probably means lower evidentiary pressure to get drugs approved, but I am not sure if that is a health advantage,” Kimmelman said.

But some health professionals said they feel optimistic about the idea of a faster FDA-approval process.

“Typically, one drug costs $2 billion and 10 years to develop,” said Wei Zhou, an assistant professor of anesthesiology at UCLA. “I think that is probably too long for the process. Shortening the approval period would be great for patients.”