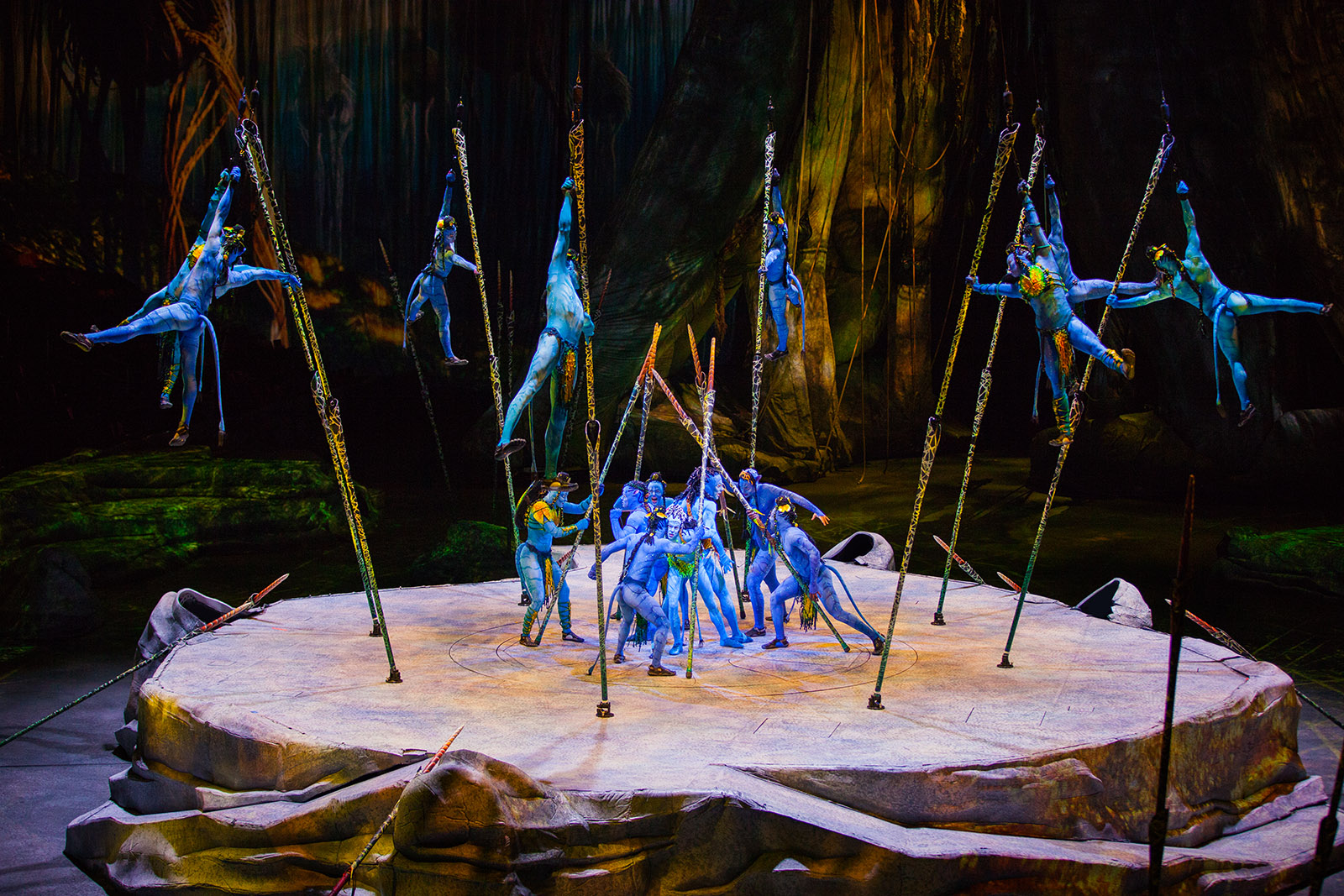 “Avatar” film fans can use 3-D glasses to immerse themselves in the fantasy realm of Pandora. But in Cirque du Soleil’s “Toruk – The First Flight,” viewers can plunge into Pandora and experience its inhabitants twist, teeter and tumble firsthand.

“Toruk,” named for the show’s dragon-like monster antagonist, takes place in a prehistoric Pandora, an alien world first introduced in the science fiction realm of “Avatar.” The production centers on the adventures of several Na’vi clan members attempting to save the Tree of Souls thousands of years before humans come to their planet.

[Related: Bruins behind beauty of ‘Avatar’]

If there is any theatrical company equipped to tackle a live-action version of the magnum opus that is “Avatar,” it’s Cirque du Soleil. Despite depicting the film world of Pandora, “Toruk” succeeds in staying more circusy than cinematic. The performers’ precarious contortions and aerial acrobats seized viewers’ attention, depicting a Na’vi people capable of much more sophisticated showmanship than the hunter-gatherer alien inhabitants of the film.

“Toruk” is an effective standalone spinoff – or perhaps more accurately, a somersault off – of Cameron’s “Avatar,” taking cues from the film’s original narrative to weave the spirited two-hour stunt show into an orderly plot. “Toruk” takes the smart approach of acting as a prequel to film, adding to the “Avatar” saga rather than trying to replicate the movie script line for line.

The set of the show transported audiences straight to a grandiose Pandora, with a gargantuan tree trunk, rocky terrain and neon foliage filling the stage of the Staples Center. But the real magic emerged when the nearly three dozen performers stampeded into the space, each a perfect replica of the Na’vi from “Avatar” decked out in head-to-toe blue bodysuits and face paint.

“Toruk” featured a lavish display of visuals and acrobatics, but the one element of the show that felt gratuitous was the dialogue. A narrator’s voice boomed from over the loudspeakers and kept the audience up to speed with the Pandoran plot, but his corny script – including an ominous line that the Toruk’s shadow is the last thing you see before you die – distracted from the splendor of the acrobatics. The performers also sometimes spoke to one another in the unintelligible Na’vi language, losing listeners in a muddle of consonant-heavy jargon without translations.

The audience could easily have followed the narrative with the emotionally-charged body language of the performers – the story of Pandora as Cirque du Soleil imagined it was much better told in actions than in words.

From the first number, their choreography embodied primal spontaneity. Their animalistic movements, with limbs flying as if jointless, flowed in sync with the drum-driven music but with an unexpected backflip or straddle jump added for intrigue. The first few numbers, however, struggled to highlight a point of focus, since the stage was full of frenetic energy with performers climbing ropes at one end and leaping through hoops from the other.

But the clearcut narrative of the show began to emerge more prominently as a shaman began to sing and the narrator’s voice commenced. The audience was introduced to two Omaticaya clan members, Ralu and Entu, both participating in a coming-of-age ceremony involving climbing, swinging and twisting through a dangling rope over a simulated fire-pit below. Solos in the show gave the audience an opportunity to hone in on one acrobat’s abilities, while the other performers stomped along to the music in a break from their usual gymnastics.

The rest of the show continued in a similar episodic narrative, with stunning set changes denoting each new number and plot point in the adventure.

In one instance, the ensemble picked up giant bones and assembled the skeleton of a dinosaur-like Thanator creature, which teetered like a seesaw as three daring performers climbed the vertebrae of the massive set piece. An acrobat at the center of the skeleton twisted herself into a human knot. Her contortions were a welcome nod to classic circus acts, which the Cirque du Soleil audiences have come to know and love.

Like its parent film, “Toruk” heavily integrated special effects, such as light-show projections to depict a volcanic eruption and flood. Body puppets of the animals of Pandora like viperwolves and direhorses referenced creatures seen in the original “Avatar” film. While the special effects could easily have pulled the spotlight off of the performers, the human element remained the centerpiece, with the acrobats’ stunning skills on par with the high-budget set and props.

The set design captured the world of Pandora onstage, appealing to longstanding fans of the franchise by laying the familiar environment of the film as the backdrop to the acrobatics.

Every moment of “Toruk” felt energetic. In their journey to save the Tree of Souls, the Na’vi performers lifted the spectators’ spirits with their superhuman athleticism, acrobatics and agility.