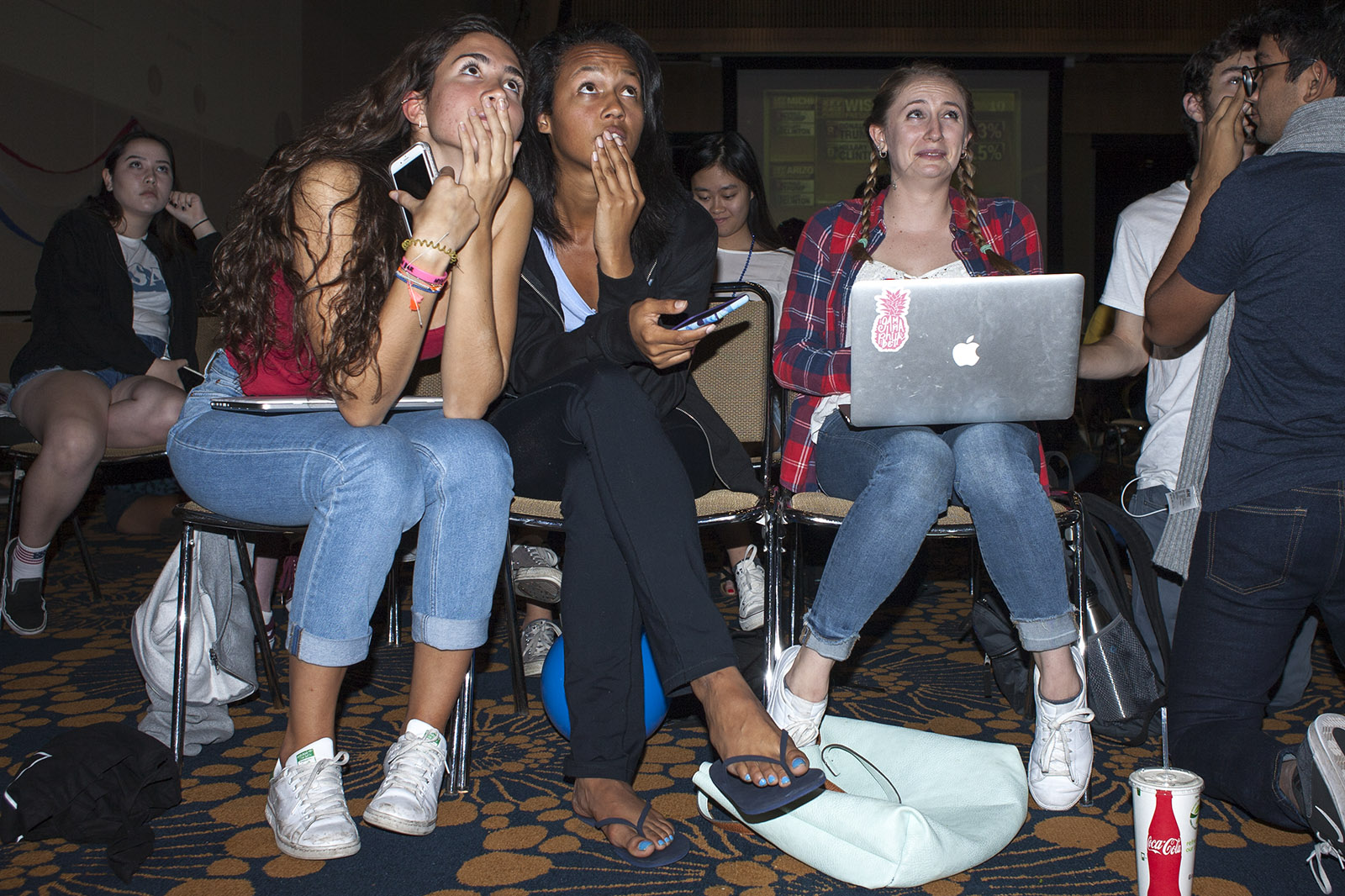 Some UCLA students and other community members continue to express concerns about the election of Donald Trump, while others celebrated his victory. (Ken Shin/Daily Bruin)

Chalk writings that cover hibernating statues of the Bruin Bear and John Wooden with school-spirited comments are typical.

However, the notes on the board around the “42” sculpture commemorating Jackie Robinson, the first black player to play in Major League Baseball, have been different the last few days.

Some messages on the “42” sculpture’s board are hostile toward president-elect Donald Trump and laced with profanity. But overall, the notes captured students’ effort to cope with the election results.

The election provoked passionate reactions that are rare following presidential elections. In 2008, many students reacted with excitement and relief when Barack Obama was elected president.

Despite widespread anti-Trump protests, some students are ecstatic over his victory.

Julia Nista, internal vice president of the Bruin Republicans and a fourth-year political science student, posted her support for Trump in the caption of a Facebook photo that showed her holding a “Make America Great Again” flag.

“(Trump) crushed the lying, cheating, deplorable human being who pulled all the cheap shots, lied to us on innumerable accounts, and still couldn’t make it,” Nista said in her Facebook post. “I can tell my children that this was the year when we saved America from impending doom.”

But most students voted for Hillary Clinton, according to early returns. Thousands attended multiple anti-Trump protests last week. The protests, like one on Thursday, gave those students a chance to express their frustration.

“We are all pissed,” said Sam Hersch, a fourth-year classical civilization student. “We need a venue for emotions.”

[Read more: Bruins react with protests on the streets and social media]

After the election, administrators quickly released multiple statements to reassure students that the university will continue to be a welcoming place for them.

University of California President Janet Napolitano and the 10 UC chancellors released a statement Wednesday that said the UC will strive to foster an environment in which all are included.

Chancellor Gene Block also said in a meeting with the Daily Bruin Editorial Board that he was proud of the student protest early Wednesday morning after the election results.

UCLA Division of Social Sciences interim dean Laura Gómez called for Trump and Clinton supporters to respect and empathize with each other.

“For those of you who supported Trump – as it was your right to do – I hope you will take notice of the pain that some of your peers and colleagues may feel today and for some time,” Gómez said in her email to students, faculty and staff. “On the other side, I hope those of us who are deeply disappointed with these election results will keep in mind that we are a diverse community with a variety of political views to which individuals are entitled to hold and to express.”

Some students said they are anxious about what will happen over the next four years.

Jonathan Koch, a graduate student who attended a march in downtown Los Angeles on Saturday, said he was worried about federal budget cuts for resources like scholarships and mental health resources.

But for other students, this election is a catalyst to fight what they see as unjust practices and policies in the country.

Kayla Click, a fourth-year gender studies student, said the election left her devastated, but also galvanized her to fight for gender equality and other issues.

“Historically, the only way to bring change is to come together and organize,” she said.

Papers taped on walls and newsstands on campus echoed the same sentiment.

“This is precisely the time when artists go to work,” said one paper taped on a newsstand in front of Haines Hall, quoting Toni Morrison. “We speak, we write, we do language. That is how civilizations heal.”