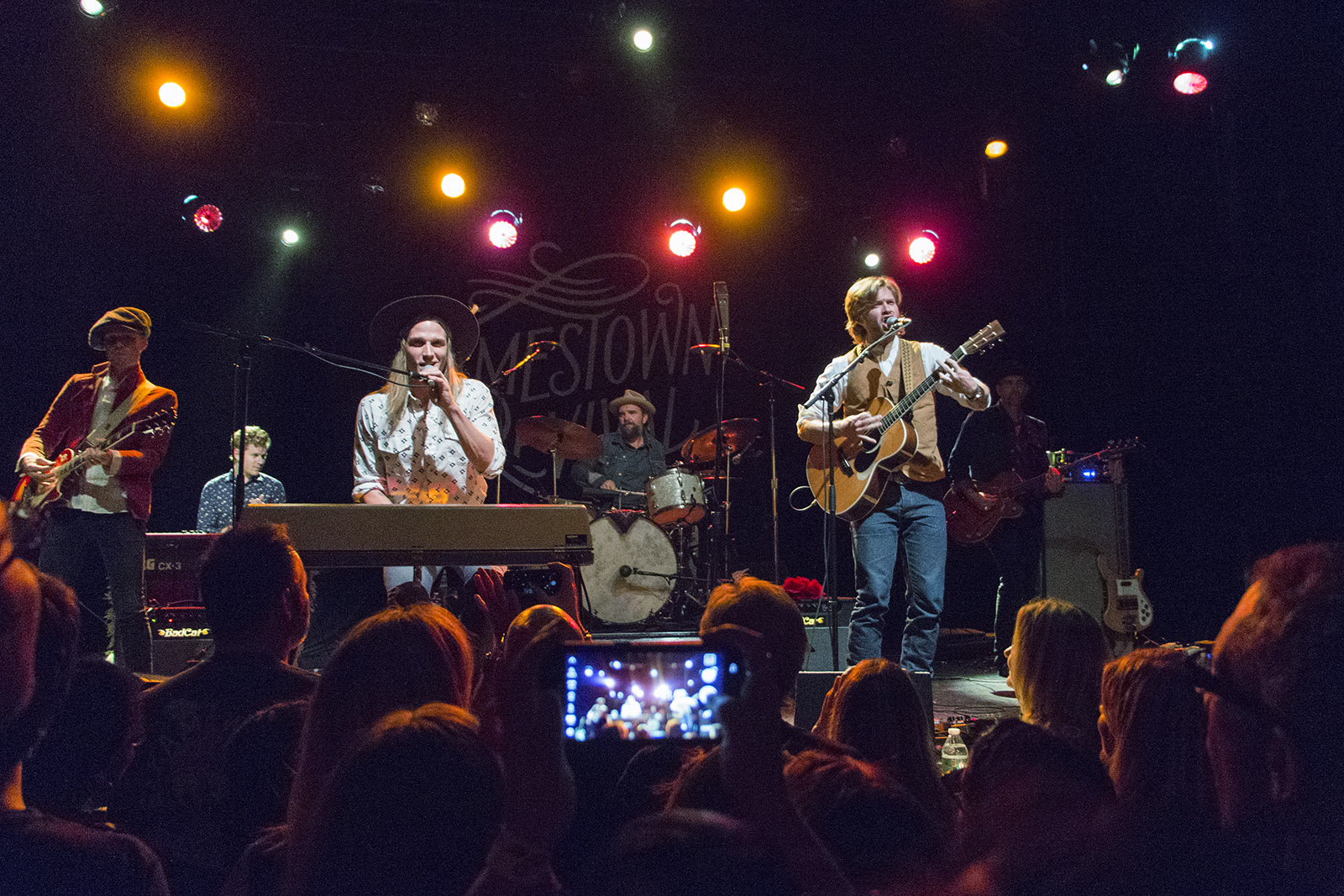 The country souls prompted the audience to sway up and down in unison to their slow southern sound. The El Rey became an old saloon, transforming the heart of Southern California into a place reminiscent of Magnolia, Texas, Jamestown Revival’s hometown.

The Texas duo Chance and Clay, who make up the Americana rock band Jamestown Revival, radiated bliss during their last performance of The Wandering Man Tour, named for the band’s newest 2016 album, “The Education of a Wandering Man.”

Chance and Clay created an intimate atmosphere through fueling the venue with southern rock adrenaline and musical camaraderie, and in doing so blurred the lines between audience member and artist. By the end of the two-hour jam session, the theater felt less like a concert venue and more like a large living room.

Alternative country artist Jonny Fritz opened the concert with his quirky personality, and he was clad in a black patchwork suit covered in a steak, salt and fork design. He set the casual tone for the remainder of the night by talking to the audience about the inspiration for his song lyrics and making light of his job as the lesser-known opening act, introducing the show with levity.

“I think I’m going to sing another one after this, so don’t close the curtain on me,” Fritz said.

Jamestown Revival opened its set with “Revival” from its first album from 2014, “Utah.” The song served as a tribute to the band’s name and its original album, reminding the audience of both where it started and how far it has come.

After opening the show, the artists expressed their gratitude of the audience’s enthusiastic applause.

The remainder of the concert consisted of songs from both the band’s first and latest albums, like “Fur Coat Blues” from “Utah” and “Love is a Burden” from “Education of a Wandering Man,” juxtaposing the band’s old and new music. The set was cohesive, as Jamestown Revival balanced both the cravings for comfort in established songs and the excitement that comes with a recently released album.

In line with the storytelling aspect of folk music, Clay and Chance recounted stories about their music in between songs. Clay said “Done Me Wrong” is about a woman who called off a budding relationship with bandmate Chance, and this was a song to get back at her. The explanation made the song more personable and gave clarity to the narrative lyrics.

“That’s what (the audience is) here for – group therapy,” Chance said, poking fun at Clay.

The chemistry between Chance and Clay shined onstage: Their harmonies seemed effortless, their voices perfectly in sync, all of which sounded better live than in their recordings. Even though they were each given a stationary microphone of their own, they often leaned their heads together to share a microphone. The action demonstrated how music has brought the two closer, quite literally, and added to the intimacy of the performance.

The entirety of the concert was an unspoken conversation between the southern duo as they flashed smiles at each other and then at the audience, making it feel as though everyone in the room was in on a secret – the personal stories of their music. Chance shared the chemistry with the rest of the band when he fearlessly left his piano to dance with the other five musicians on stage.

After the band finished its set, Chance toasted the room with his beer in a final salute to the audience. As if leaving the living room to return the beer bottles to the kitchen, Chance and Clay walked off stage side by side, sharing a look of familiarity like two old friends.

“He’s the closest thing I got to a brother,” Clay said.