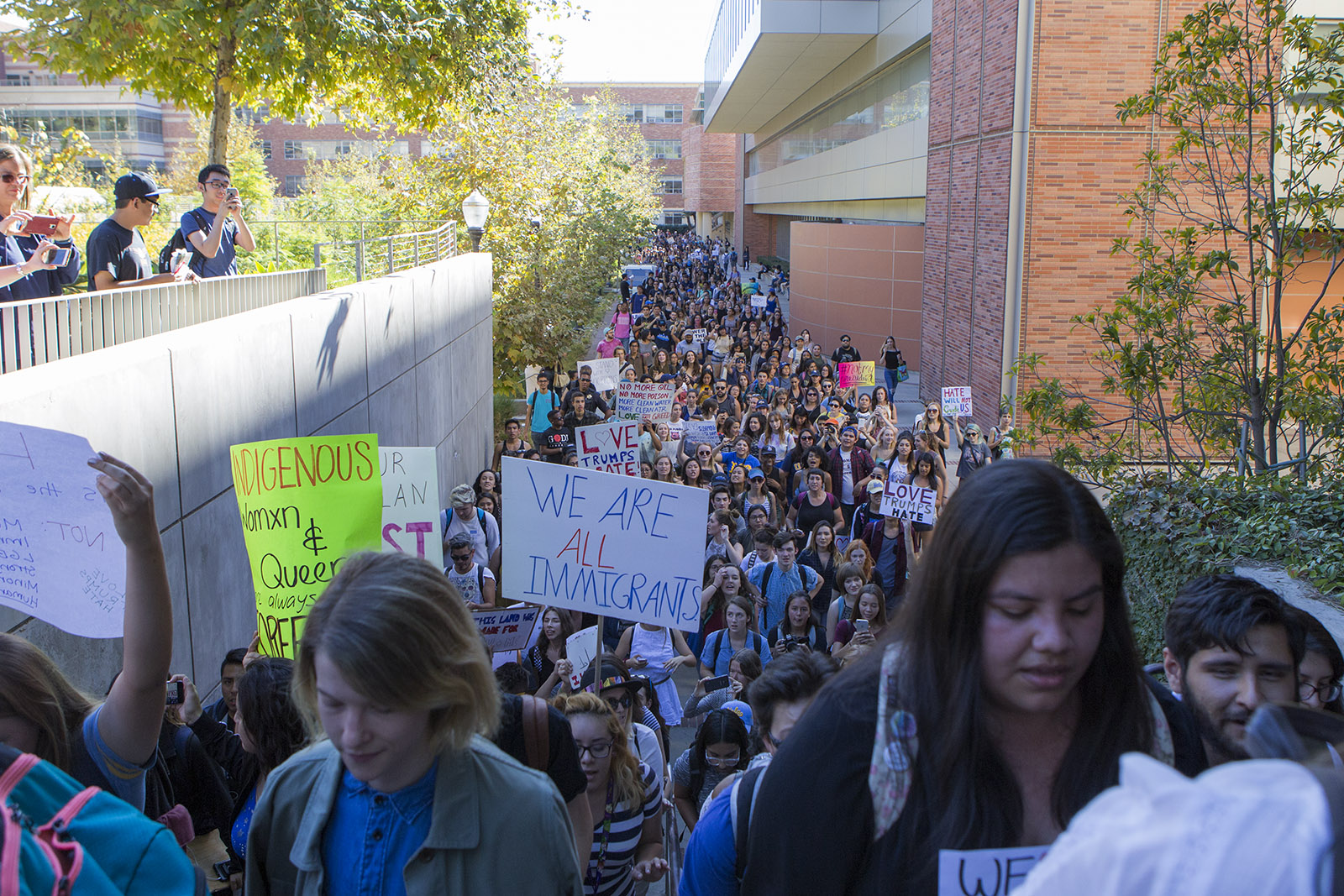 Hundreds of students chanted and waved signs as they marched through UCLA on Thursday afternoon at a “Love Trumps Hate” event organized by several student groups. (Miriam Bribiesca/Photo editor)

Students raised their fists in the air while marching from Kerckhoff Hall on Thursday afternoon in protest of Donald Trump’s election.

More than 500 students marched up Bruin Walk after assembling in front of Kerckhoff Hall at 11 a.m. The protesters passed Powell Library and Dodd Hall and walked to the Court of Sciences at about 12:40 p.m. before reconvening at Kerckhoff Hall at 1 p.m.

Young Progressives Demanding Action at UCLA organized the “Love Trumps Hate Rally” and spread the word on Facebook. The protest is the second on campus since the election results were announced. About 2,000 students marched through campus and Westwood to protest Donald Trump early Wednesday morning.

[See more: Bruins react with protest, on the streets and social media]

Students spoke in support of progressive values and ethnic minorities at the rally. Students from the University of Southern California and California State University, Los Angeles, also attended the rally.

Protesters chanted “We reject the president-elect,” “Not our president” and “No Trump, no KKK, no fascist USA”. Students also chanted “1-2-3-4, slavery, genocide and war, 5-6-7-8 America was never great” in opposition of Trump’s presidential campaign slogan, “Make America great again”.

“We will continue to work and strategize for how to deal with a Trump presidency,” said Martinez, a fourth-year political science student.

Maite Zubiaurre, associate dean for equity, diversity and inclusion, said at the rally she thinks UCLA should try to understand the election results and work together toward a better future.

“As faculty, we are here for you and look forward to working together,” Zubiaurre said. “Silence is not an option.”

“We created this event to not only fight for those values but to gather students in unity to express their dissent,” Cazalis said.

Bianca Brown, a second-year physiological science student, carried a handmade poster reading “#NotMyPrez.” Brown said her parents are Trump supporters and threatened to stop paying her tuition if she did not support Trump.

“I have to repress all these feelings around (my parents),” Brown said. “This is me finally having a voice and being able to say ‘Fuck Donald Trump.’”

Angelica Castillo, a fourth-year anthropology student, said some of her family members are undocumented immigrants from Mexico. She added they are worried they will be separated from their families because of Trump’s immigration reform proposals.

Dominique Thompson, a fourth-year cognitive science student, said she thinks protesters want to voice their dissent instead of chaotically revolting.

“I cried for a couple of days, but this feels a lot better than crying,” Thompson said.

Students then walked back to Kerckhoff, where a speaker asked students to occupy the space. About 20 students remained sitting in front of the building at about 2 p.m.

Need help with my kids pick ups, drop offs and after school activities. Kids are aged 11, 9 and 7. Need help starting at 3pm most days until about 8/830pm. Must have a reliable car and have flexibility. Please contact me at sara[email protected]