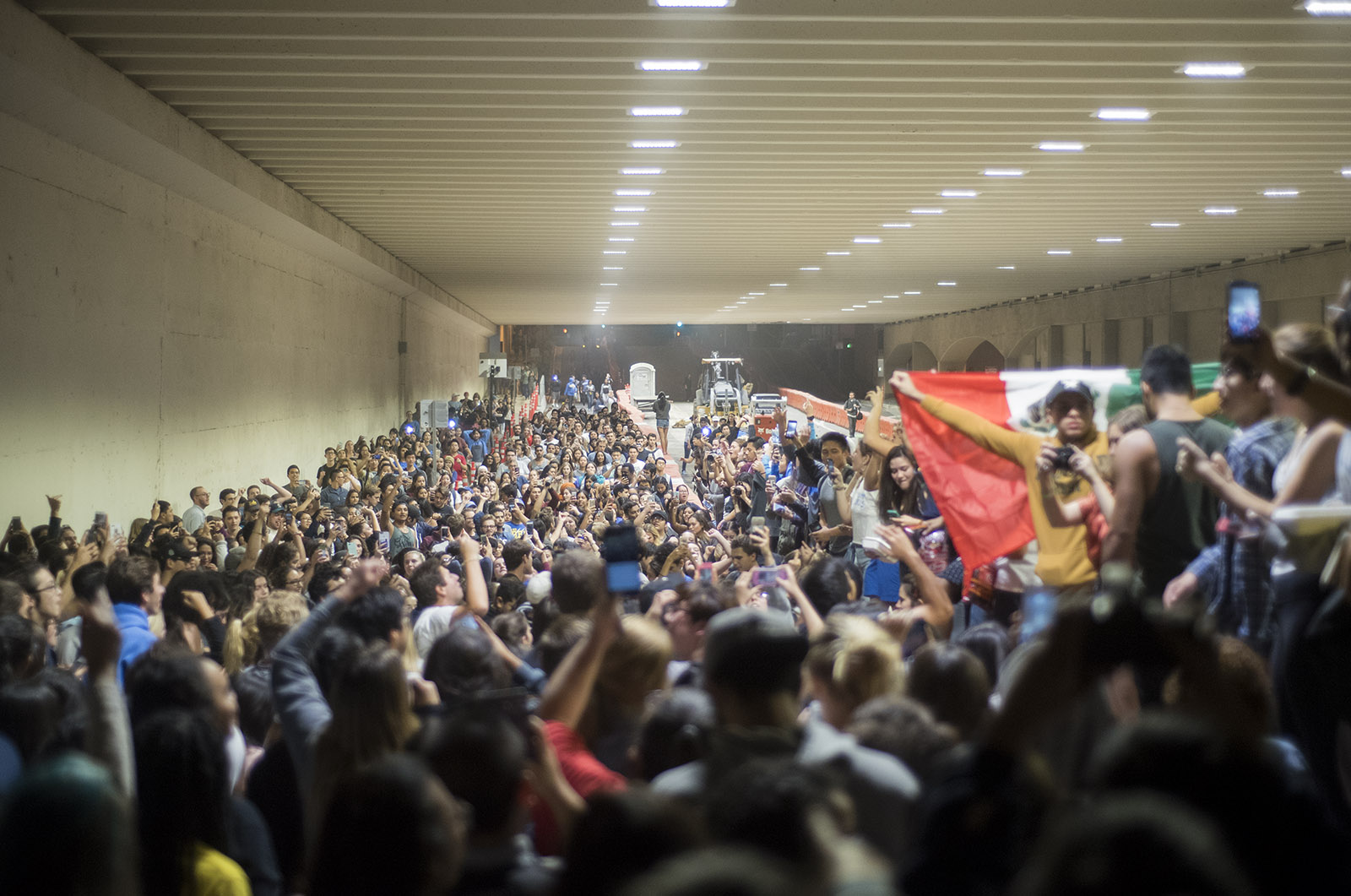 By Ryan Leou and Tanner Walters

Correction: The original version of this article used incorrect pronouns to refer to Jesse Teso.

Hundreds of students marched down Bruin Walk from the Hill and campus before heading to Westwood Village. At least 1,000 more students joined by the time the crowd reached Westwood Boulevard.

Protesters chanted “Fuck Donald Trump,” “Fuck the wall” and “Not my president.”

Students began tearing apart and burning a Donald Trump pinata, and some students tried to flip over a car. The students stopped after noticing a man inside the car. Other students played guitar and held a Mexican flag.

Jesse Teso, a first-year Spanish and mathematics student said he was in the lounge of his building when he heard people yelling outside.

“A few people were saying, ‘Fuck Donald Trump,’ with rumors about something happening at Royce Hall,” Teso said.

“Nobody would accept a bigot to lead the greatest country in the world,” he added.

Cynthia Barrales, a first-year linguistics student, said she and other protesters were angry about the result.

Melissa Tapia, a first-year political science student, said she did not feel like crying after the race was called.

Tapia added that although Trump was elected president, she would not recognize him or support him.

University of California police officers followed protesters on foot and in police cars around campus, but Los Angeles police and fire officials intervened when the group reached Wilshire Boulevard and Veteran Avenue.

On Wilshire Boulevard, students briefly blocked traffic as cars honked, some in support of protesters. Many students held their fists in the air as they ran or walked through the street.

One of the students leading the protest said nobody will accept the results of the election. After marching to Wilshire Boulevard, hundreds of protesters walked to the Janss Investment Company Building, where they did an 8-clap before sitting for about 10 minutes.

Students then marched back to campus and to the Hill at around 1:30 a.m. Some students dispersed, and others continued to chant.

Similar protests emerged in other areas across the state, including UC Santa Barbara, UC San Diego, UC Irvine, the University of Southern California and downtown Los Angeles, according to the Los Angeles Times.

Nobody was arrested, and no violence was reported as of 1 a.m.