Students cast votes in multiple locations on the Hill, in Westwood 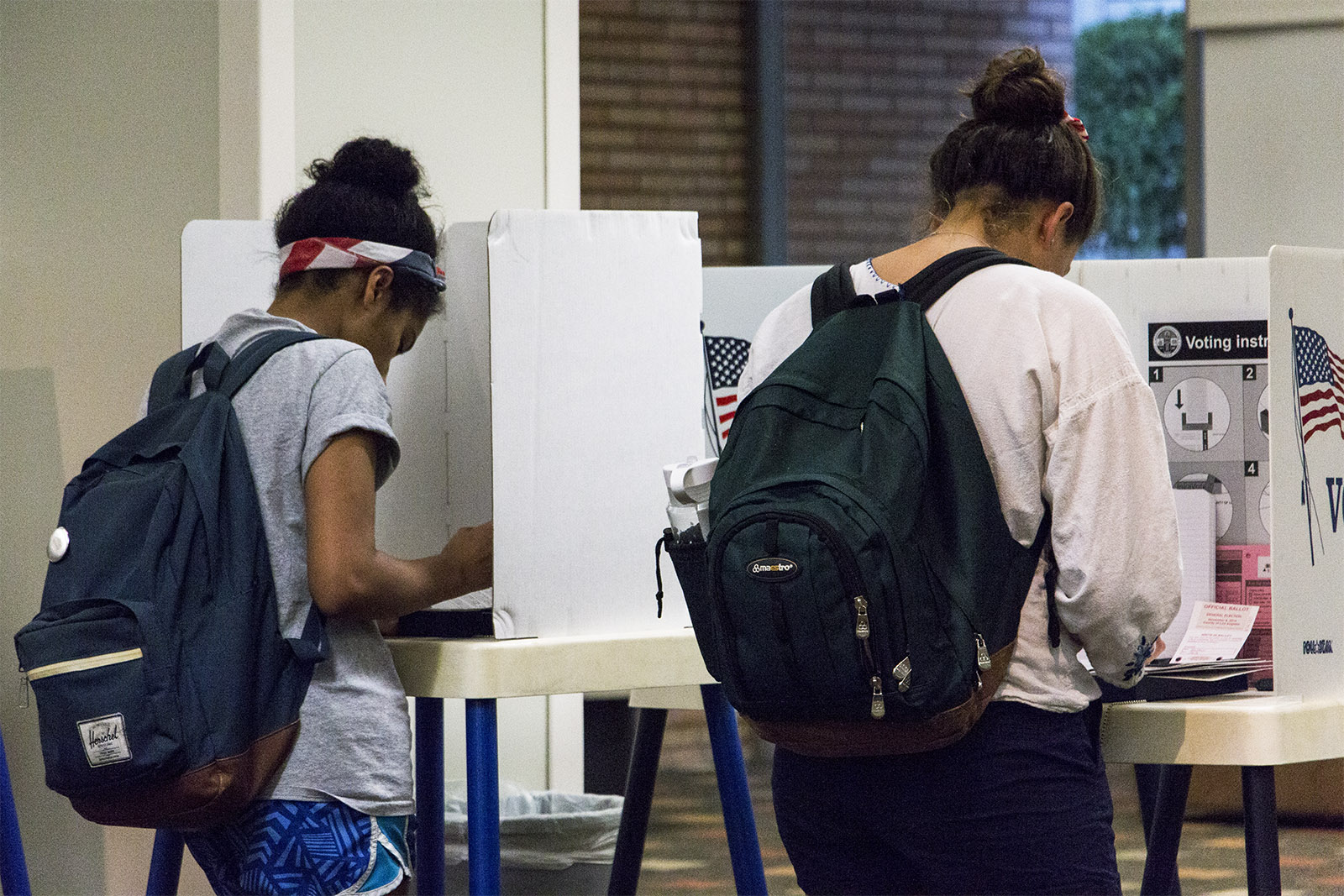 The wait to vote got as long as three hours Tuesday. (Stella Huang/Daily Bruin)

UCLA students and Westwood residents faced long lines and administrative issues in their attempt to make their voices heard on Election Day.

The wait to vote at Rieber Hall got as long as three hours Tuesday afternoon, while the line at 8 a.m. to vote at Lambda Chi Alpha fraternity house stretched out the door and down Strathmore Drive.

Despite the hours-long wait, many students said they felt excited to vote in their first election for president.

Jeannie Huang, a second-year cognitive science student, said she was excited to vote on issues like the death penalty and recreational marijuana

“I’m surprised that I get a say in repealing death penalty, legalising marijuana,” Huang said. “Those are big issues.”

Huang added that she was disappointed that she had to vote on a provisional ballot.

“I thought I had changed my address but it didn’t go through,” Huang said. “I want my vote to be counted but it takes a while to process.”

Sean Gallaher, a Rieber Fireside Lounge polling coordinator, said turnout was much higher on Election Day than in the June primary election.

“You know it’s always going to be the case that a general election has more turnout,” Gallaher said. “But I think this has been higher than anyone was expecting. I think the interest in voting is extremely high with this election.”.

He added poll workers tried to inform voters who might have been in the wrong line of their correct polling locations. But he thinks first-time voters might have gotten confused and joined the wrong line.

Justin Jackson, president of the On-Campus Housing Council and second-year political science and communication studies student, said he had a positive experience voting for the first time.

“I was actually more interested in seeing all of the propositions because those are what will have lasting impacts on Californians for quite some time,” Jackson said.

Jackson added he researched all of the propositions and the platforms of both presidential candidates in preparation for Election Day.

“I wanted to make sure that I wasn’t just voting based on party lines and how people like to just vote with their party block,” Jackson said.

Juan Guzman, a first-year biology student and first-time voter, said he was excited to choose between Hillary Clinton and Donald Trump.

“I was stuck between (Clinton and Trump) to be honest,” Guzman said. “It was pretty hard because both of them had their ups and downs, positives and negatives, but I’m satisfied with who I voted for.”

Guzman said he voted for Clinton because he liked her economic plan more and thought her plan could steadily improve over time.

Several students said they faced difficulties when they tried to vote. For example, some students’ names were not on voter rosters, so they had to vote with provisional ballots. A similar issue happened during the June primary election.

According to the Los Angeles County Registrar-Recorder/County Clerk, poll workers give provisional ballots to voters whose registration cannot be immediately verified. This can happen when their name is not on the roster for that polling location or the voter appears to vote at the wrong polling location, among other reasons.

Some students who live on the Hill also said they had not received their vote-by-mail ballots, despite registering with the county registrar well before the deadline.

Rebecca Kendall, UCLA spokesperson, said in an email statement that all mail deliveries were up to date Tuesday. She added many mailboxes contained election ballots that students had not yet picked up, as of noon.

“A few ballots arrived (Monday) night and were promptly delivered,” Kendall added. “The mailroom has been working with Residential Life to make sure that students have received communications about going to their mailboxes regularly to check for ballots.”

Arturo Molinar, a first-year applied mathematics student, said he thought polling stations were organized, but voting took some time because there were a lot of people. Molinar added that the registration process was more difficult.

“When I registered in the first place, I was living in a different residential hall,” he said. “I later moved to a different one but my ballot was mailed to my previous address and It was very troublesome.”

After Donald Trump was projected to win in Wisconsin, the Associated Press projected he would win the election.

Need help with my kids pick ups, drop offs and after school activities. Kids are aged 11, 9 and 7. Need help starting at 3pm most days until about 8/830pm. Must have a reliable car and have flexibility. Please contact me at [email protected]l.com