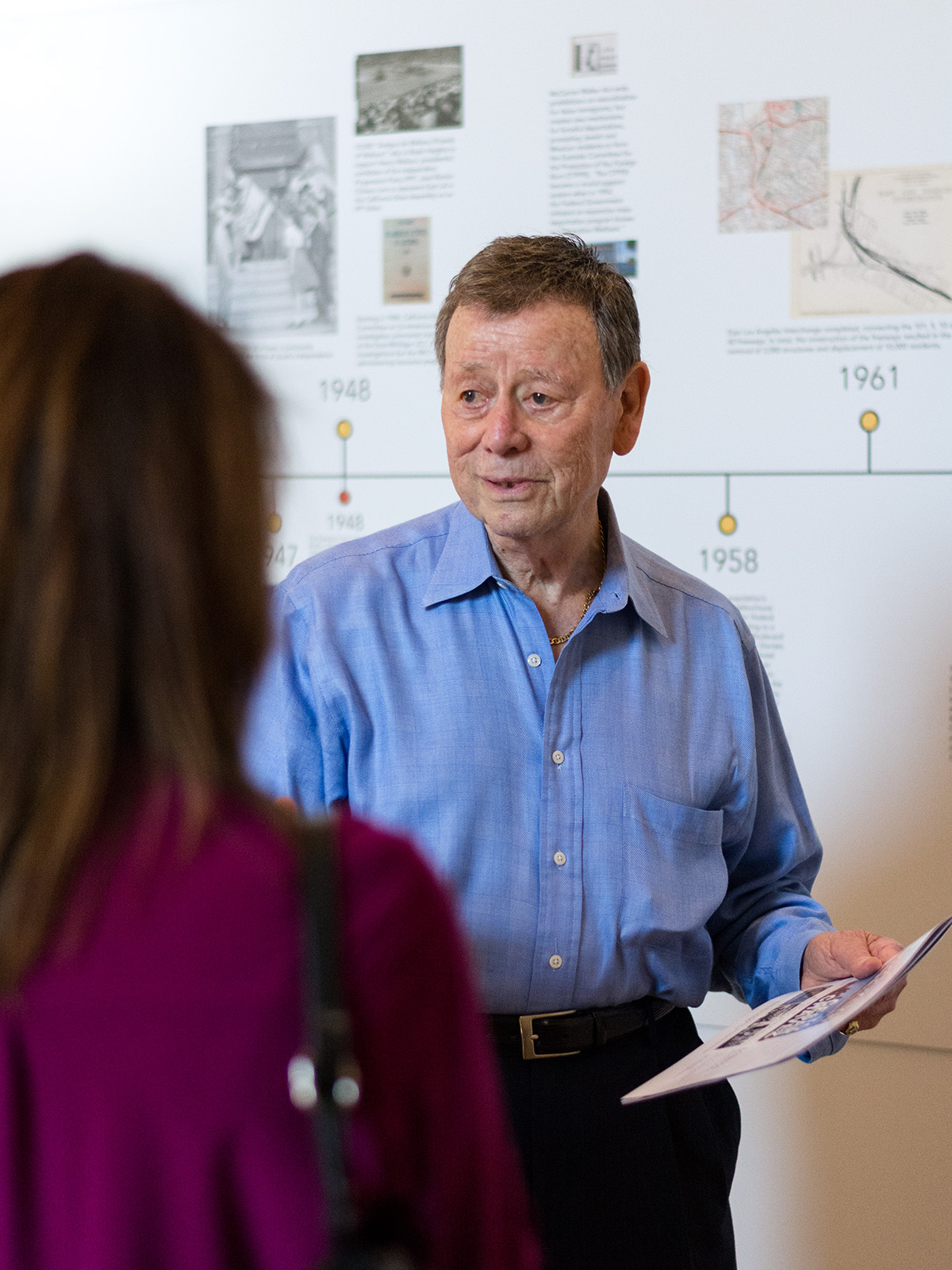 Donor Alan D. Leve described his childhood in Boyle Heights prior to the opening of the exhibition “From Brooklyn Avenue to Cesar Chavez: Jewish Histories in Multiethnic Boyle Heights,” which is open through Wednesday in Royce Hall 306. (Esmeralda Lopez/Daily Bruin)

Alan Leve counted the bumper stickers for presidential candidates Franklin Roosevelt and Alfred Landon while he was a child growing up in Boyle Heights in the 1930s. He frequently visited a soda shop that served ice cream cones shaped like volcanoes.

“It was a warm friendly environment – people cared about each other,” said Leve, a UCLA alumnus. “There were immigrant families, newly arrived, but really wanted the American dream.”

On Sunday, Royce Hall transformed into a little piece of Leve’s hometown.

The exhibit “From Brooklyn Avenue to Cesar Chavez: Jewish Histories in Multiethnic Boyle Heights,” is on display until Wednesday, honoring the naming and launch celebration of the Alan D. Leve Center for Jewish Studies. Leve, who graduated in 1951, donated $5 million to the Center for Jewish Studies in 2015. The gallery celebrates both the namesake donor and his hometown of Boyle Heights by focusing on concepts such as art, social justice and education in the historically immigrant community in East Los Angeles.

Maps of Boyle Heights lay on the floor of the room, with walls covered in historic photographs and timelines. On Friday, during the installation, the smell of fresh paint and sawdust wafted through the air; carpenters put the last touches on the new exhibit.

A large wall shows a timeline with both local and international events, conveying the social, cultural and economic changes of the neighborhood, said Caroline Luce, a UCLA alumna and the co-curator of the exhibition.

The gallery also includes artifacts such as an old Yiddish typewriter and yearbooks belonging to old Boyle Heights residents, along with new technological mediums like digital maps and videos.

Some of the displays are musical in nature: One piece involves a mixtape on which guests can listen to music that came out of the Boyle Heights community, including compositions by Herb Alpert and the Tijuana Brass, Los Lobos and the ’80s punk band The Brat.

Graduate student Jonathan Banfill contributed audio art to the exhibition. He created an eight-minute sound mix, which is similar to a soundtrack of Boyle Heights, by walking along the main streets of the neighborhood in May in a class with Luce and Todd Presner, co-curators of the exhibit. Banfill’s goal was to capture the aural experience of walking through the streets on a normal Saturday afternoon, he said.

“I recorded ambient sounds of people talking, the outside of stores, traffic and music that was playing,” Banfill said.

One of the big themes throughout the exhibition involves recognizing the social justice and activism occurring in Boyle Heights through art. Images from the Madres de Este Los Angeles movement depicting a group of mothers fighting the construction of a prison in the 1980s fill the exhibit, in addition to newspaper clippings recounting historic student walkouts in the ’60s for more education funding.

In Boyle Heights today, newly opened art exhibits such as U.T.A. Artist Space on South Anderson Street have been the subject of anti-gentrification protests among community members. While the Royce Hall project only depicts instances of activism in Boyle Heights up until the 1990s, in doing so, it shows the long history of social justice present in the community, Presner said.

The exhibition is part of the Mapping Jewish LA project, a part of the Alan D. Leve Center for Jewish Studies that is aimed at documenting and displaying artifacts of Jewish neighborhoods in Los Angeles, Luce said.

The Center for Jewish Studies has never tackled an exhibition of this magnitude before, Presner said.

“We’re literally building walls in the room, and we’re also displaying a wide range of objects, some of which have not seen the light of day,” Presner said.

The diversity of Boyle Heights played an active role in shaping the community and inspiring the exhibit, Luce said. Luce, who first began studying Boyle Heights 10 years ago, said the stories of Boyle Heights, including Leve’s, makes the neighborhood special.

“There were a lot of different models of community from very observant orthodox Jews to very radical secular Jews,” she said. “That diversity really distinguishes Boyle Heights from other Jewish immigrant neighborhoods elsewhere.”

Presner hopes that the exhibit will lead to an appreciation of the history of the neighborhood.

The gallery will help viewers engage with Los Angeles communities like Boyle Heights and learn more about the history of the city around them, Banfill said.

“Hopefully for the people in the exhibit, they can see a living, breathing active neighborhood that can be in Royce Hall for a bit,” Banfill said.