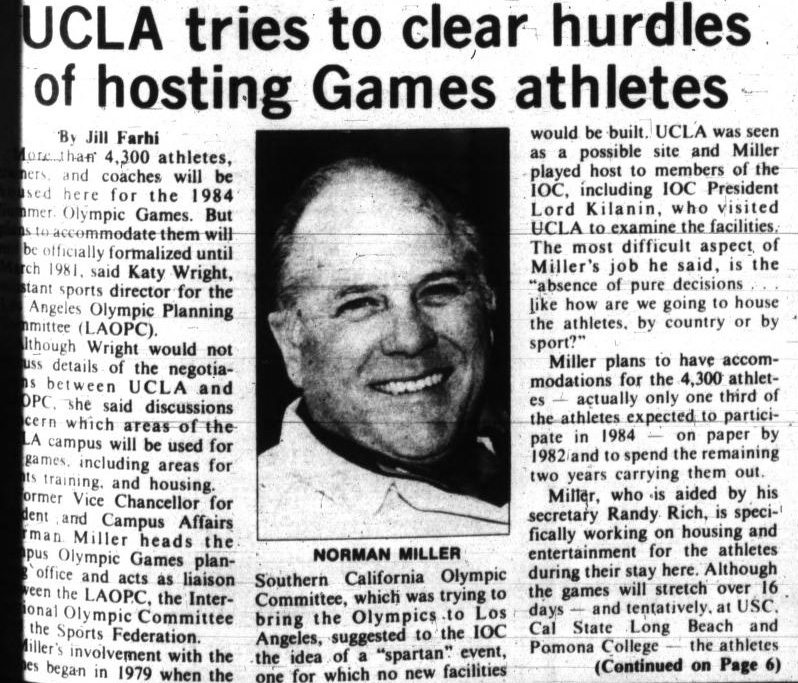 In less than 11 months, the world will know whether Los Angeles or Paris will win the bid to host the 2024 Summer Olympic Games.

Both cities have pledged some sort of “risk-free” financial plan, meaning they will not spend a ludicrous amount of money on new stadiums or venues. However, while Paris plans to spend more than $1 billion on their Olympic Village, Los Angeles has a low-cost solution: UCLA’s residence halls.

Los Angeles previously hosted the Olympics in 1984, when UCLA hosted one of two Olympic Villages and some sporting events. But while UCLA’s residence halls are crucial to the city’s bid for 2024, they weren’t as much in 1984.

Just four years prior to the start of the 1984 Olympics, the Olympic organizing committee, LA84, and UCLA had not yet reached an agreement about which venues would be used nor where on the Hill the 4,000 athletes would be housed, according to a Daily Bruin article dated Sept. 30, 1980. The article featured an illustration of Olympic athletes arriving on campus to an uncompleted structure.

Six months later, some members of the International Olympic Committee visited campus and were disillusioned at the state of UCLA’s residence halls, as they felt their facilities “weren’t adequate” for the Games, according to an article dated March 10, 1981. Additionally, some IOC members from Europe did not like the idea of two Olympic Villages, according to the same article.

At the end of that month, however, UCLA, LA84 and IOC reached an agreement as to which residence halls were going to be used.

This time around, if Los Angeles gets the Olympics, UCLA will face different pressures. As LA2024 Chairman Casey Wasserman announced in January, UCLA would house every athlete. Even though the Hill is a lot bigger than it was in the 1980s, that’s still a lot of people to accommodate – 11,544 athletes participated in the Rio Olympics this summer.

Right now, there are about 14,000 students on the Hill, most in doubles and triples and UCLA plans to add about 2,000 to 2,500 beds within the next couple of years to accommodate enrollment increases. In 2024, besides the athletes, UCLA would also need to house the students and other people that live on the Hill over the summer.

This means that UCLA will need to either add more beds to rooms or build a completely new residence hall.

The ideal solution would be the latter, since athletes and students alike would not like to live in crowded dorm rooms. This option is also the least realistic – the Hill is already so dense there is no room for new buildings. Building a new residence hall would require demolishing an existing structure or disturbing the border between the university and the residential community.

In a discussion with the Westwood Community Council last July, Associate Vice Chancellor for Housing and Hospitality Services Peter Angelis assured the council UCLA will find room for 2,500 additional beds, but did not give specifics.

LA2024 under Wasserman’s leadership has truly crafted an attractive Olympic bid. However, city officials and UCLA need to find solutions sooner rather than later if they want improved chances to win the bid for the 2024 Olympic Games.