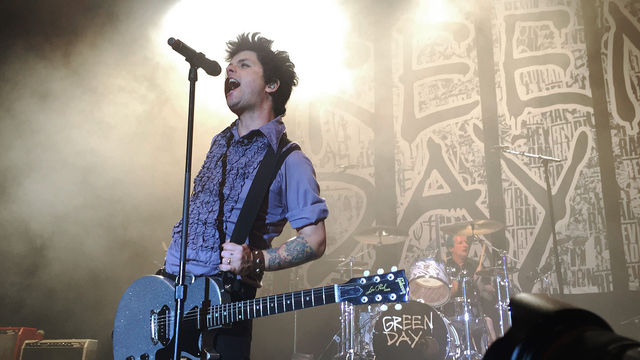 Society tends to view age 40 as a slowing down point, the beginning of the dreaded middle age. But for the gleeful anarchists of Green Day, age holds no sway as they continue to rock out as well as the young kids.

On Monday, Green Day performed at the Hollywood Palladium for the first time since 1994. The show was an energetic, fast paced romp that showcased many of the band’s newest material from their 2016 album “Revolution Radio,” while also highlighting many fan favorites like “Jesus of Suburbia” and “Minority.”

From the very first song, Green Day played the crowd as well as they did their instruments, cranking the energy up with many call-and-response chants. Some of the bands other antics included members of the touring crew running across the stage in a pink bunny suit and creepy clown costume to hype the crowd.

“Put those phones down, this is flesh and blood,” said lead vocalist and frontman Billie Joe Armstrong. “It’s just us tonight. This is our own private underground, this is freedom.”

The combination of music from the band’s oldest and newest albums music felt like a full revival of Green Day during its 1990s and early 2000s heyday. As an album, “Revolution Radio” marks the band’s return to the energetic, anarchist rock sound Green Day made its name on two decades ago. But today the band’s sound is more mature, its lyrics even more politically charged, and sound production extra edgy. Hearing the music live – complete with sarcastic comments and political jabs in between songs – made for an even more adrenaline-infused experience than could be gleaned from the band’s discography.

Armstrong took his time in between songs to engage the audience with stories playing up the audience’s Los Angeles pride. He mocked Donald Trump by sarcastically imitating the candidate’s political rhetoric in between verses of the song “Holiday” and encouraged the audience to participate with countdowns and chants of the chorus.

“California is eventually going to fall into the oceans, so we might as well stick together,” Armstrong said in between songs. “All it’s gonna take is a simple 1-2-1-2-3-4 and it’s Armageddon time.”

Armstrong made the sold-out show feel intimate. He charmed the crowd with personal stories of previous tours and showed off the first guitar his mother gave him. In a particularly human moment, Armstrong stopped in the middle of playing “Ordinary World,” admitted to forgetting the lyrics, and ended the song with the chorus. Considering the newness of the 2016 song, the goof was understandable.

Much of Armstrong’s speeches advocated for more unity and compassion, decrying homophobia, racism and xenophobia. Armstrong preached unity and acceptance for all people and was especially vocal about his political stance against presidential candidate Donald Trump. He said if people do not take action to ensure that Trump does not become President, then racism and violence will become the norm.

“This is fun; love is complicated but it’s fun,” Armstrong said. “Everyone is entitled to a bit of love and understanding – we gotta watch out for each other.”

The Green Day band members often ran up to the crowd and gave high fives or threw drum sticks into the crowd, showing off their youthful exuberance and joy for performing. At one point, Armstrong had a lighthearted kazoo-saxophone duet with one of the band’s musicians, drawing large laughs of approval.

The concert was loud but not so deafening that it overwhelmed the audience and or that the instruments drowned out Armstrong’s singing. But that’s just rock and roll, and the combination of volume and vibration from the speakers helped keep the energy levels high. The intermixing of fan favorite songs and promotion of new music from the “Revolution Radio” album deftly acknowledged Green Day’s iconic past while looking forward to the band’s future.

As a longtime Green Day fan, hearing them play their standards was like living the soundtrack of my childhood. All the variations they threw into the songs, like pauses, solo breaks and subtle alterations in the lyrics to cater to the Los Angeles venue, provided a fresher take on decades-old music. For example, the line “pulverize the Eiffel Towers” in “Holiday” was changed to “pulverize the Donald Trump Towers.”

The night ended with “Good Riddance (Time of Your Life),” which perfectly encapsulated the emotion of the evening is a soothing, two-minute song.

“For all you weirdos and everyone who didn’t fit in, tonight is for you,” Armstrong cheered. “And don’t worry, we’re coming back in 2017, because this is my home. California is my home.”