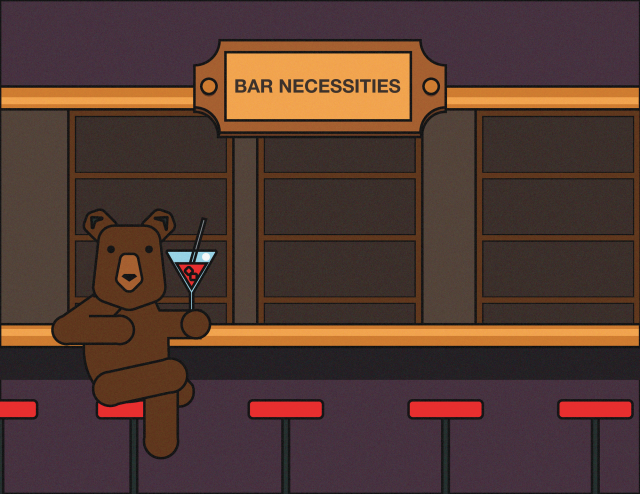 Living in the Prohibition era must have been really hard. Honestly, I don’t think I could have coped.

Fortunately, although it is located in a Prohibition-era building, the Culver Hotel bar doesn’t make customers bootleg to get their hands on the good stuff.

I had never heard of the chic, historic location on Culver Boulevard until Erin announced it as her favored destination for our “jazz bar” evening.

I decided to wear my standard going-out gear for the evening: a purposefully tatty denim shirt – I’m actually cool, I swear – black jeans and a pair of passably smart-looking Nikes.

However, I arrived at Erin’s place for some friendly pregaming only to discover she and her roommate Cat had dressed up for the event in cocktail dresses and high-heeled shoes. In the Uber on the way to the bar, my companions mercilessly teased me about how underdressed I was and succeeded in making me feel inadequate – I’m British, it doesn’t take much.

Erin: Will, is that what you’re wearing to the bar?

Will: Yeah, is there a problem?

Erin: Well the bar’s kinda fancy. Your apartment is five minutes away, maybe you should go and change?

When we arrived at the hotel, I was immediately struck by the size and grandeur of the building. It was like a fancy Manhattan block had been decorated with fairy lights, surrounded with trees and dumped in the middle of Culver City.

As we walked up to the entrance, I expected a mountainous bouncer to reject me for not being dressed in a tuxedo, but we weren’t even carded.

The bar itself was split in two with a larger, brightly-lit downstairs and a darker, smaller lounge upstairs. The packed downstairs felt more like a restaurant with a family atmosphere, so the three of us headed straight for the lounge.

Erin: I don’t like how cramped this part of the bar feels. Also, I was expecting the decor to feel more like the 1920s, given that it sells itself as a Prohibition-era bar.

Will: I disagree; I like the feel of the place. It’s intimate and cozy. I could see students coming here on a fancy romantic date.

We ordered a trio of cocktails from a rugged barman with black braces who looked as if he had stepped straight out of “Boardwalk Empire.”

Erin chose the Dark N’ Stormy, which contained rum, lime and ginger beer, while Cat opted for the Pomegranate Mojito with rum, lime, mint, sugar and pomegranate liqueur. I was feeling more adventurous, so in the spirit of whiskey-worn Prohibition private investigators, I ordered The Tinman, a concoction of whiskey, besamim aromatic spice liqueur and ginger beer, finished off with a lemon twist.

Both the girls’ cocktails were served in mason jars, an overly hipster quirk which jarred – pun very much intended – with the overall classy feel of the bar. Erin’s drink lived up to its name and buzzed with tanginess and spice. However, Cat’s mojito was disappointing; the promising pomegranate liqueur was overpowered by the lime. Fortunately, The Tinman wasn’t lacking in heart but instead packed a dual alcoholic and spicy punch.

From the outside of the hotel and the plush decor inside, I expected the joint to be brimming with well-dressed guys and high-heeled dolls, but, as is often the case in California, the patrons were wearing a diverse range of clothes.

For every guy dressed like a James Bond villain in a turtleneck and suede jacket with a pocket handkerchief, there was someone else in a bro tank and shades. In my denim ensemble, I felt happily in the middle of these two extremes.

The sumptuous decor was definitely the bar’s highlight. The couches were littered with fancy cushions. Erin stroked a layered one resembling a rose and didn’t let go of it for the next half-hour. Both Erin and Cat agreed the bar gave them ideas for interior decoration, and I commented that the tall, thin chairs in the corner added to the master-criminal vibe we were getting from some of the other patrons.

The Culver Hotel bar is perfect for a fancy romantic date, but it’s not a place for spending all night relaxing with a few mates.

As I was leaving I thought we might have a limo waiting for us, or maybe a 1936 Chevrolet Standard full of Tommy gun-toting gangsters waiting to whack us. But instead we had our Uber driver Andrew in his Toyota Prius. We had been given the promise of grandeur and Prohibition thrills, but we left with a twinge of disappointment at what could have been.