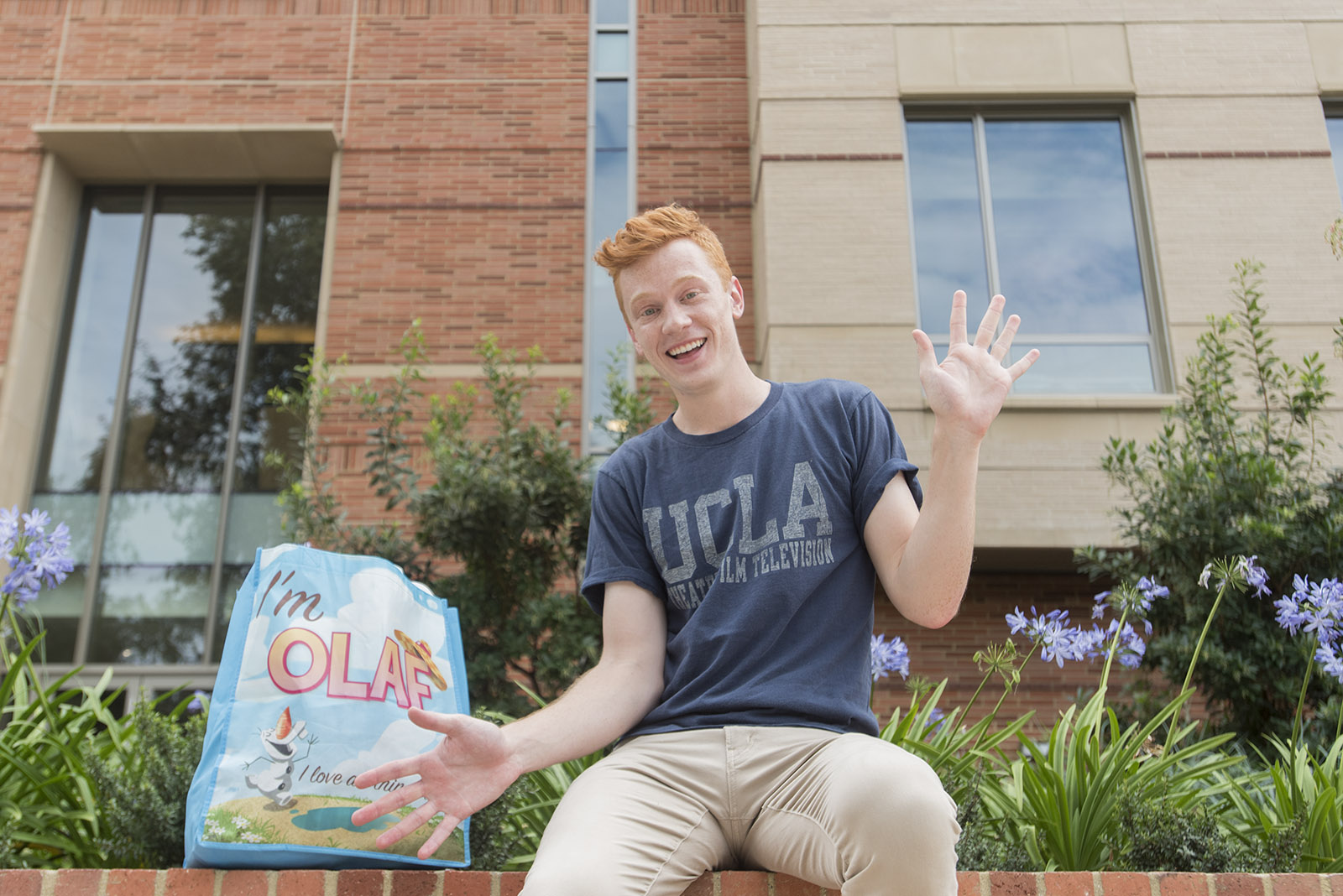 Yelling at the walls, he forms an L-shape with each of his hands and moves them in a wave-like motion. Hand stretches and vocal warmups make up Doherty’s routine before he enters the “Frozen – Live at the Hyperion” stage as Olaf, Arendelle’s resident snowman.

Though Doherty was accustomed to vocal exercises by the time he graduated from UCLA’s theater program in 2014, he only began adding hand exercises to his routine when he landed his first puppeteering role. Doherty must project the character’s innocent and lovable charm whilst using his hands, feet and torso to operate a life-size snowman puppet.

When Theater, Film and Television lecturer and “Frozen – Live” casting director Michael Donovan began compiling a list of potential actors to bring the residents of Arendelle to life, he knew his former student Doherty would be a good fit for the whimsical snowman.

“(Doherty) has an absolutely adorable quality … he has sort of a gentle sweetness about him,” Donovan said. “So does Olaf.”

Doherty immediately impressed in auditions by making specific acting choices and bringing his own bubbly personality to the character, Donovan said. His charming, comedic nature, gentle sweetness and acting sense propelled him to the puppeteering workshop round of callbacks, where Doherty excelled despite having zero puppeteering experience, Donovan said.

“Kevin was one of those that picked (puppeteering) up very quickly,” Donovan said. “The puppeteer wasn’t worried about him at all.”

After the final callback round, Doherty was officially one of six actors invited to puppeteer Olaf on a rotating basis. He and the other five actors have taken shifts portraying the snowman on the Hyperion stage for over seven months since the show began in May.

The stage version of Olaf is a puppet complete with its own facial expressions and range of motion, but Doherty is not hidden during the show. Instead, he and the puppet perform as a synchronized team, he said.

Onstage, Doherty follows the Olaf puppet, raises his eyebrows with Olaf when he is bewildered and turns his head according to the puppet’s point of focus.

Doherty and Olaf’s performances match, but their costumes are entirely different. Olaf is adorned in his signature black-coal buttons and carrot nose, while Doherty is dressed in dark blue, Norwegian ice-harvesting garb to accentuate his human performance. “Frozen – Live” costume designer Clint Ramos said this color contrast is necessary in order to divide the audience’s attention evenly between the puppet’s and the actor’s individual performances.

“The puppet can only be as expressive as the hand gestures,” Ramos said. “It’s basically got three or four facial expressions, but we needed more than that. And so we wanted the focus to be on the actor’s face.”

Doherty manipulates Olaf’s facial expressions with hand triggers similar to a bicycle brake system. The thumb trigger pulls back the puppet’s eyebrows, the index-finger trigger lowers and raises his eyelids for blinking and the middle-finger trigger controls the mouth. If Doherty rolls the thumb trigger back far enough, the eyelids are also stimulated to produce an astounded look.

To give Doherty and the other Olaf actors complete control over the prop, the puppet designer crafted a metal harness connecting Doherty’s shoes to Olaf’s feet and his waist to Olaf’s torso.

Doherty said his favorite scenes to perform onstage include Olaf’s shining moments, such as his jazzy and comedic solo “In Summer” and the fireplace scene where Olaf offers Anna comforting words on the brink of her death.

When not singing or delivering lines, Doherty must make sure Olaf still appears lively by tapping his feet or mimicking breathing.

“If the puppet is too still, all of a sudden the magic is gone,” Doherty said.

Doherty said he had to experiment with facial expressions more similar to that of the puppet’s than he typically uses, in order to ensure he and the puppet move and react as one character.

“Because he’s a puppet, his expressions are simplified,” Doherty said. “I’m not necessarily using the full range of what I can express with my body … so it’s simpler for me, as a human.”