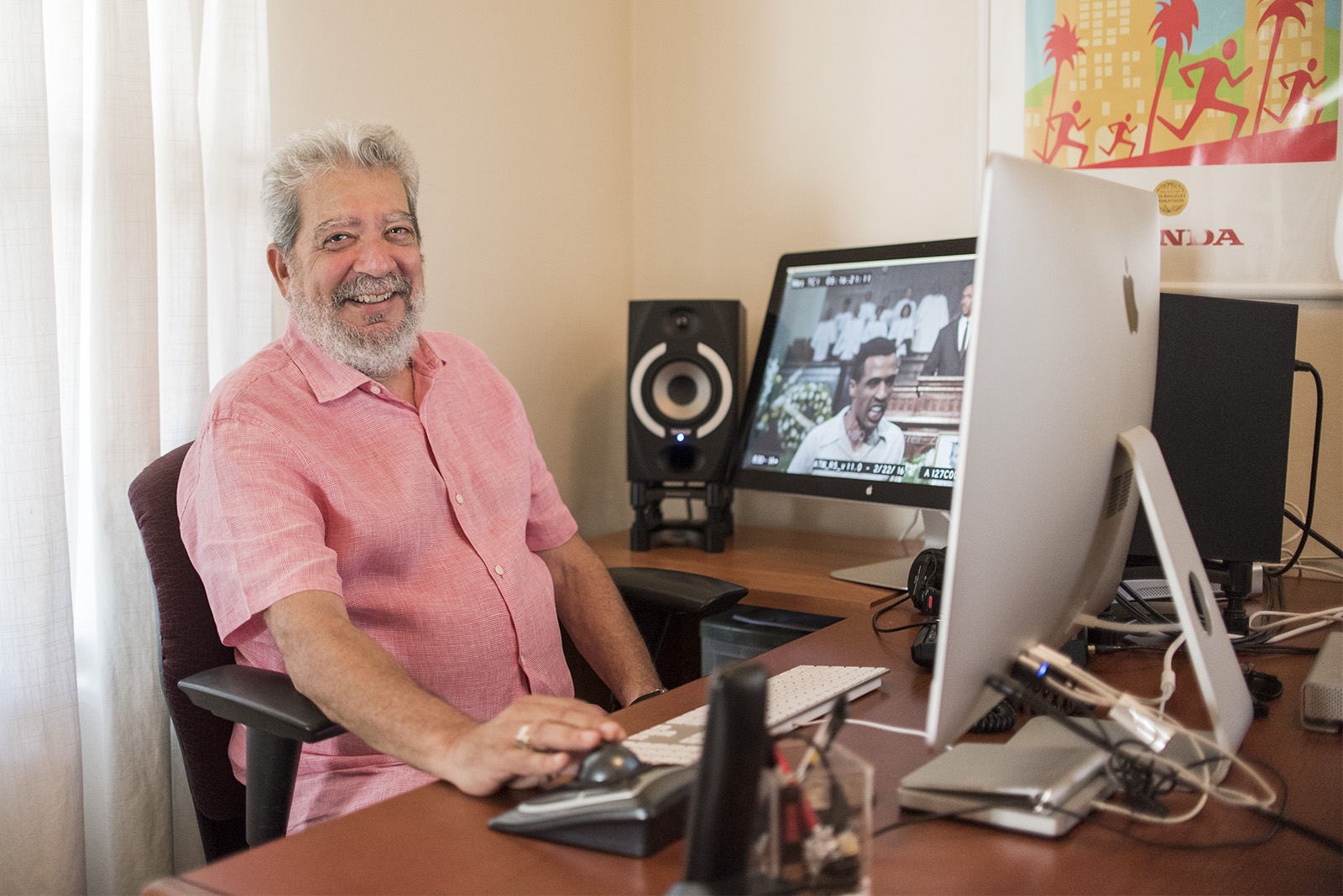 Alumnus Larry Kemp drew on his own memories of the 1960s while mixing the dialogue of “All The Way,” nominated for an Emmy Award. He added authentic sounds to newscasts and funeral scenes. (Miriam Bribiesca/Photo editor)

Forty-three UCLA staff members and alumni were involved in projects nominated for the 2016 Emmy awards in 16 different categories. Over the course of four weeks, the A&E staff will feature some of these UCLA affiliated nominees and their projects.

In Larry Kemp’s profession, the best work is the work that goes unnoticed.

Kemp, a UCLA alumnus, was the dialogue and automatic dialogue replacement supervisor for the movie “All the Way,” a biopic about Lyndon B. Johnson’s presidency, which was nominated for Outstanding Television Movie at the 2016 Emmy awards.

Kemp and his sound-mixing team casted, strategically placed and blended the background voices of the film. In order to maintain a standard of authenticity for the film, which takes place in 1960s, Kemp had to hear, record and integrate any period-specific sounds or dialogue.

The principal actors were given microphones during filming, but their voices were accentuated at the expense of the background actors, who didn’t have microphones and often pantomimed panic and protests, said ADR voice casting director Jason Harris. Kemp’s task was to restore sound to the non-principal actors’ muted performances.

Three weeks before the film aired on HBO, Kemp began to fill the background’s silence by watching early cuts of the film on a monitor, placing and editing pre-recorded voices to fit onscreen action. But before he could intermix the background vocals, he needed actors’ voices to add to the film. For this, he enlisted the help of Harris and Peter Rose.

Rose, an ADR voice casting director, said Kemp provided her and Harris with cue sheets, indicating the timestamps of action-packed background scenes such as civil rights rallies and government dinner parties. After reading and interpreting Kemp’s notes, Harris and Rose then began to formulate a cast list based on age, race and vocal ability.

“You get to see the picture of the person and then decide what kind of voice comes out of it,” Rose said.

Due to the scope of background personalities ranging from young, African-American activists to old, white conservatives, Harris and Rose initially wanted to cast about 60 extra voices to record over the course of four days, Harris said. Unfortunately, HBO’s budget only allowed for two days and about 20 actors, which meant the pair had to choose their talent carefully.

“You have to really look for people who are, one, good with improvisation, and two, whose voices would sound and feel appropriate for the time period,” Harris said.

One recording day was dedicated to scenes featuring black civil rights activists, while the next was reserved for racist white Congressmen and other government officials, Harris said. It was up to Kemp to integrate these voices into a cinematic presentation of political turmoil.

Kemp said the most complex scene to mix and the most rewarding scene to watch was a church funeral scene, in which Martin Luther King Jr. (Anthony Mackie) speaks about the injustice of the deaths of civil rights activists James Chaney, Andrew Goodman and Michael Schwerner, who were murdered by a white mob

The scene, which featured a dominantly black audience of hundreds of people, required background audio in the form of unison reactions and “call-out” exclamatory lines to create an outraged and grief-stricken atmosphere, Kemp said.

“People want to hear – if they’ve got home theater systems – the feeling of fullness and a surround,” Kemp said.

In order to produce the sound of a full crowd, Kemp gathered a group of black actors in the sound studio and pointed at each in succession as the actors hurled a different call out at the microphone. In the mixing stage, Kemp combined the recordings with the original production material as well as outtakes, analyzing each soundbite through his headphones and arranging it so no line seemed out of place.

“If they were all married together, one sore voice would ruin the whole thing,” Kemp said.

To be true to the time period, Harris said many of the loop group actors gathered historical facts to work into their unscripted conversations. Some actors who voiced White House officials discovered Johnson’s presidential schedule online and referenced exact appointments and dates in their dialogues while recording White House scenes.

“My job is to give out the homework, and then we hope people come in with (research),” Harris said.

Kemp and his team held separate recording sessions for non-principal actors with more extensive voiceover work. While HBO secured the rights to original 1960s broadcast videos, the audio for these newscasts was copyrighted and unusable. In order to avoid a legal battle, Rose and Harris auditioned voice actors to replace the vocals of journalists such as Walter Cronkite on film.

Kemp then manipulated their performances to fit the 1960s newscasters’ mouths, and edited the clips to sound old and staticky. Kemp’s age was an asset when it came to determining authenticity.

“I knew that it sounded great because I was around for all this when it was actually happening,” Kemp said. “I was a teenager.”

Rose said she admires Kemp’s seemingly innate ability to pick out minute auditory details when examining a scene. In the scene leading up to the murder of the three civil rights activists, the police radio was fabricated to reflect a 1960s Mississippi station, and the victims’ breaths were enhanced to convey their fear thanks to Kemp’s meticulous cues, Rose said.

“(Kemp) has to sift through it and take out anything that’s a false note,” Harris said. “We want to make his life as easy as possible, but ultimately he has to make it all sound flawless.”

Kemp said he takes pride in watching a final cut that is both pleasing to the eye and the ear due to his tedious mixing – especially if the audience cannot detect the labor behind the final product.

“That’s sort of the fun of the job for me,” Kemp said. “To add something rich and pleasing without pulling attention to itself.”