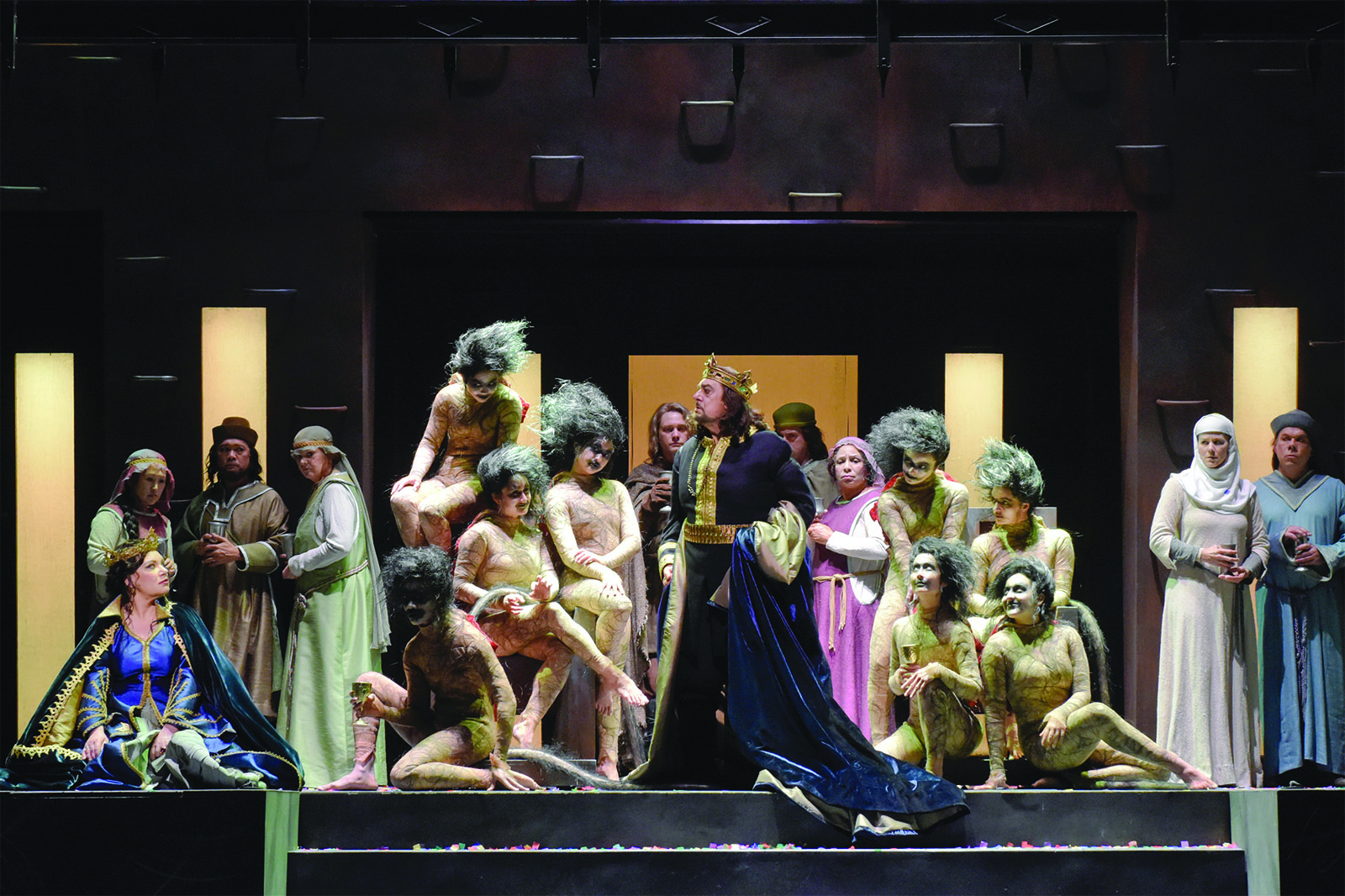 The LA Opera is performing Giuseppe Verdi’s Italian opera “Macbeth” through October 16. “Macbeth” tells the story of a general on his quest to become King of Scotland after encountering a coven of witches who predict his future.(Courtesy of Karen Almond)

Few tales of ambition and evil are as enduring as William Shakespeare’s “Macbeth,” and combined with the artistic power and opulence of opera, “the Scottish play” is a timeless and thrilling story.

LA Opera’s performance of Giuseppe Verdi’s Italian opera “Macbeth” is intricate and whimsical with powerful music, especially during the characters’ individual arias. But the performance fell short with its lackluster staging and lack of physical action on stage.

Before the performance, music director and conductor James Conlon gave a lecture about the history and the nuances of Verdi’s “Macbeth.” While the concepts were complex and Conlon used a lot of musical jargon, his discussions on the narrative significance of certain instruments and the similarity of Verdi’s witches to gypsies were informative.

The lecture ended with two actors performing the scene in which Macbeth and Lady Macbeth argue about the bloody daggers in the traditional Shakespearean dialogue. It was a pleasant surprise and helped prime the audience for Verdi’s version.

While different in form, the opera generally captured the tone of the original play. The lead actors brought the rage and dark ambition of the Macbeths and their enemies to life with their rich vocal performances. Macbeth (Plácido Domingo) and his vibrant voice filled the stage with the anger, horror and desperation of the evil Scottish king. Ekaterina Semenchuk’s high, clear voice complimented Domingo’s lower notes and her poise on stage personified the single-minded ambition of Lady Macbeth.

Rather than fading into the background, the chorus had a strong, integral presence on the stage. The range of voices blended together into a sonic barrage of Italian that complimented but never completely overshadowed the lead singers. The raw energy of the choral numbers were the most stirring and emotionally charged parts of the opera.

The entire opera is sung in Italian, but since the story of “Macbeth” is familiar, the language barrier did not present a problem when following the plot. Regardless, screens displayed English subtitles, above the stage towards the ceiling and to either side. But after a few minutes of struggling to view the translations, I developed a headache and sore neck.

A central theme in “Macbeth” is the supernatural, a role filled by the choral witches that sang with a consistent haunting beauty. The dancer witches’ performances were confusing due to their cheery movements which contrasted with the story’s somber nature and their otherworldly movements, such as climbing on the walls, were repetitive and quickly grew stale. The choral witches looked stereotypically dark and drab, like the children’s costumes common around Halloween, but the dancer witches were entirely different and seemed more like demons. They had messy hair and heavy, grotesque makeup, while their costumes had tails and an exposed patch of flesh and bone around the spine.

Their best dance was strange and featured eerie black baby dolls with glowing yellow eyes. This piece, however, was overly whimsical and didn’t fit into the play. Much of the witches’ activity involved the aforementioned climbing on ladders on the set’s walls, which was disconcerting at first, got old quickly and didn’t serve much purpose.

Besides the dancers, the rest of the actors were stationary, almost statuesque. The only real action that occurred was a brief fight scene between Macbeth and Macduff during the opera’s finale and even then, the battle was unconvincing and lazily choreographed. Although the focus of the performance was the music, Macbeth’s defeat is a pivotal and important moment in the play and deserved more effort in its choreography. Also, much of the potential for action during scenes like Duncan’s murder and Banquo’s ambush was underused.

Though the opera did not provide many visuals by way of action, the costumes were intriguing and eye-catching. Simple yet elegant, the costumes captured the medieval time period and were reminiscent of costumes in “The Lord of the Rings.” Choral members often wore long, flowing robes and many scenes looked as if they were taken straight from a medieval painting.

However, the performance was sparse by way of props, which were mostly used by the dancing witches. The most striking and effective use of props were the cribs and demonic baby dolls used during a dance in the third act.

The play also made use of giant plastic heads in the scene where Macbeth receives his second prophesy from the witches, but they looked too cartoonish to really blend with the serious nature of the play and looked especially farcical when they began to twirl and dance around the stage.

LA Opera’s performance of Verdi’s “Macbeth” has bold, beautiful music and boasts emotional depth from the actors. However for all its grandeur, the production lacked some of the action, drama and gravity present in other renditions of “the Scottish play.”