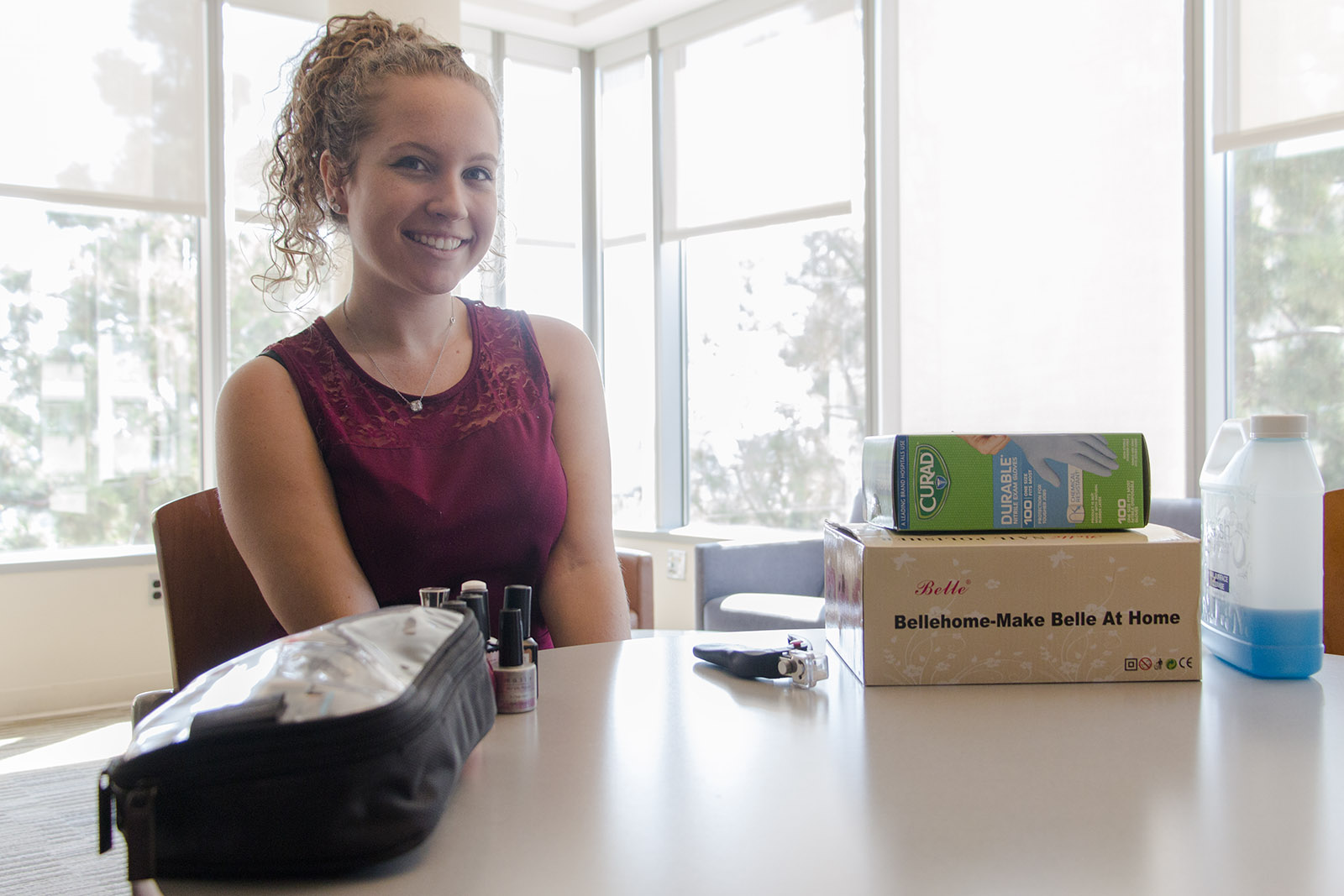 Courtney Scott hauled a black suitcase of nail polish into her dorm lounge.

On the eighth floor of Hedrick Summit, the second-year mathematics for teaching student provides professional manicures to UCLA students under the company name Court’s Nail Army.

After starting the business her freshman year just three floors below her current dorm room, Scott was surprised at the amount of attention she received, completing over 40 appointments within the first year of the company’s beginning at UCLA, she said.

“At first, when I started doing other people’s nails, I liked doing really intricate designs on people,” Scott said. “I would try to be more and more adventurous with all of the crazy designs, but now I just kind of like getting practice.”

Former customer Danielle Jensen said Scott provides a nail service on par with that of the local salons around UCLA. The second-year theater student appreciates the convenience of an on-campus manicurist and a cheaper price.

This year, Scott already made four appointments within the first few days of arriving back at UCLA.

Next to the small, circular lounge table, Scott pulled open her black suitcase, exposing ten small drawers containing various nail polish colors which ranged from nudes to sparkles. Glass capsules of pinks and blues peaked out from one of the drawers while larger compartments on top of the drawers displayed brushes, nail filers and containers. After looking through the drawers, Scott laid out everything on the table, including her LED heater, latex gloves, filer, primer, two polishes and dehydrant.

With rush coming up, Davis said she and Kim had planned on getting pedicures and manicures in Westwood to prepare for the week-long event. However, after seeing the expensive prices at local nail salons, the pair decided to try out Court’s Nail Army.

Sitting at the table across from Davis, Scott glanced down at Davis’s fingernails, keeping her eyes focused on each finger, and decided on what shape to file them. After buffing the nails by rubbing them with a coarse styrofoam-like cube, she proceeded to shape the nails into a rounded square with fluid side-to-side motions on the corners and edges, all while discussing her major and offering class tips to Davis and Kim.

Davis said one of her favorite parts about the appointment was the personalized conversation about classes and school life during the manicure. Together, the pair chatted about cardio hip-hop, shoe sizes and math classes.

“Typically when you go to a salon it’s more of that client-professional distance, so they’re just kind of doing your nails and whatever,” Davis said. “But since she’s someone at our school and actually in our grade, too, we had a lot of nice conversations.”

After shaping the nails, it was time for dehydrant. Scott grabbed a vial of clear chemical liquid among the bottles and bags laid out on the table in front of her. She then painted over the nails to dry them out so that the polish would stick better.

Since the clients wanted to match as many of their rush outfits as possible, they decided on a nude look for their nails. Scott grabbed a bottle of primer in front of her and began prepping Davis’s nails for the nude gel polish, following with a quick base coat.

In between coats, Scott used her LED gel heater to dry the fingers as quickly as possible. A simple button push on the top of the pink plastic box sparked a neon LED light, bathing the nails in a blue glow.

After the base coat, Scott opened the gel polish and began coating Davis’s nails until each finger displayed a soft nude color at its tip. Using her own pointed acrylic nails, Scott wiped off some excess nail polish along the edges of Davis’ thumb nail while talking about black diamond slopes and her dislike of snowboarding.

Scott gave Davis’s nail a final stroke with the small polish wand and told her to place her thumb within the tiny walls of her pink gel heater one final time.

Davis removed her hands after the light went off and glanced at the pinky nude coloring. With the nails dry, Scott could apply the finishing touches, including a final topcoat to set the nail polish, a cleanser to clean the nail off and cuticle oil to heal the cuticles after the appointment.

Davis smiled at her new nails while Scott turned to Kim and began the process all over again.

“I like the reward of just how people feel afterwards,” Scott said. “When you get your nails done, you get a certain sense of confidence, and I love to see that in people.”