Alumnae take the stage in ‘Frozen’ production at California Adventure 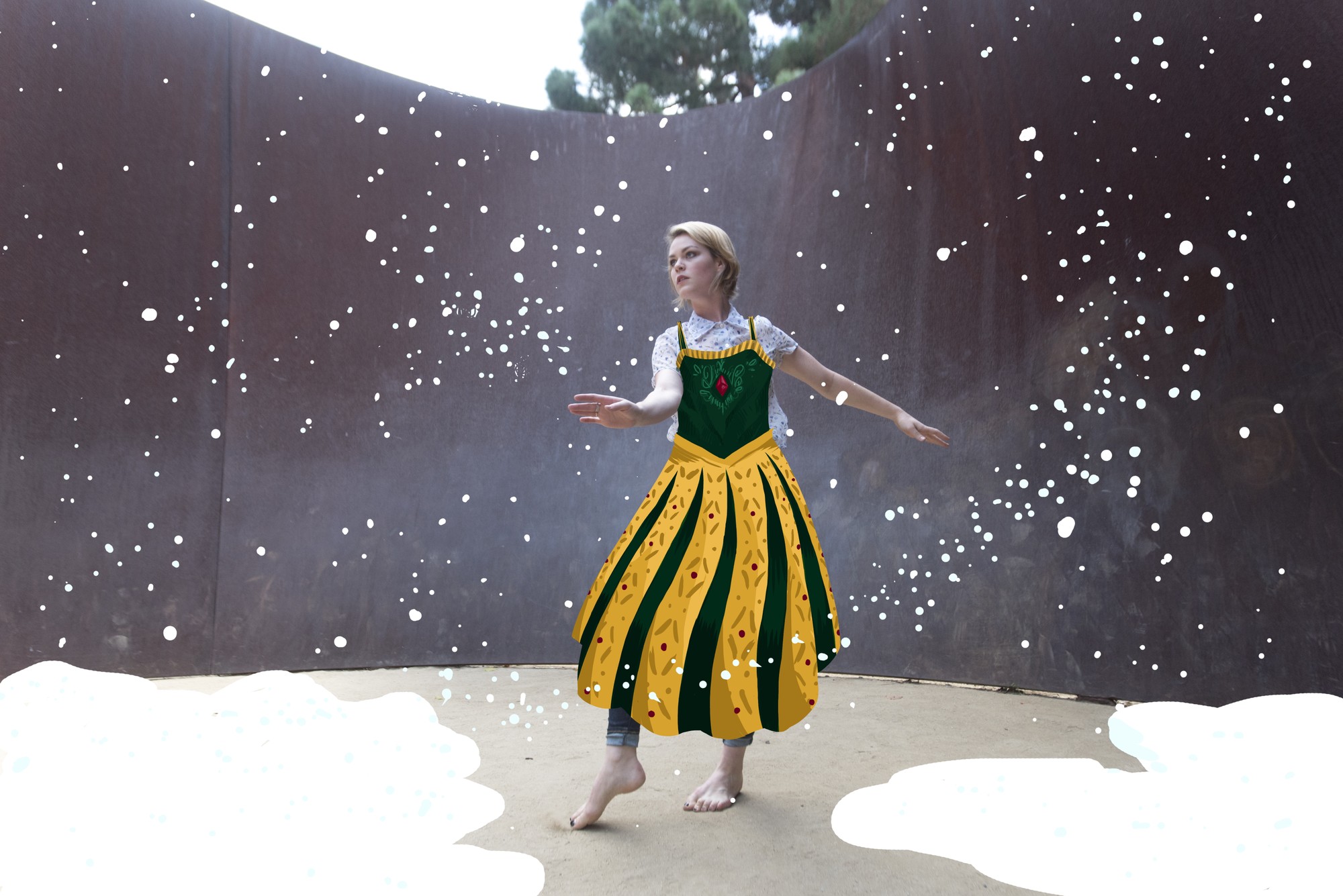 Katheryne Penny is one of three UCLA Theater, Film and Television alumni that perform in the ensemble of “Frozen – Live at the Hyperion,” a new live entertainment show at Disney California Adventure. (Miriam Bribiesca and Harish Balasubramani/Daily Bruin senior staff)

Three alumni work day jobs in the icy kingdom of Arendelle, transforming from ice harvesters to castle servants to trolls. And then they do it all again, five days a week.

School of Theater, Film and Television alumnae Katheryne Penny, Carly Bracco and Jane Papageorge perform in the ensemble of the abridged onstage musical “Frozen – Live at the Hyperion.”

Though their individual roles are unnamed, the three ensemble members each bring the “Frozen” story from screen to stage through performance. With no previously staged version of the movie to use as a guide, Bracco, Papageorge and Penny were free to each add their own artistic vision to set the tone of the new live musical.

Bracco auditioned and joined the cast of “Frozen – Live” during its workshop phase in November 2015. Every rehearsal was an experiment, with the creative directors actively inviting the ensemble to voice their ideas.

“I’ve seen probably 100 different versions of the show,” Bracco said. “You can still see little bits of our creativity in the actual show itself.”

The original 109-minute film was cut to around 60 minutes for the live production to hold younger audience members’ attention, Bracco said. Although some dialogue and repeated musical numbers were cut, Bracco and her fellow choristers help close gaps in the show with high energy group numbers, such as during an added chorus verse with layers of harmony for “Love is an Open Door.”

Ensemble members also get their time to shine, Bracco said. In one rehearsal, she suggested her servant character get thrown across the stage in a cart during a hectic scene leading into the song “For the First Time in Forever.” Her idea snowballed into the scene now known as “Chaos,” where all the servants act hysterical while preparing the castle for the coronation.

Onstage for about 80 percent of the entire show, the “Frozen – Live” ensemble brings an element of realism by filling in the world of Arendelle around the leads, Bracco said.

“In real life we don’t have just two or three people dictating our lives – it’s an entire world,” Bracco said. “We help recreate the world around them.”

Papageorge, who has also been part of “Frozen – Live” since the workshop, and her fellow ensemble members who are cinematographers of the scenes, facilitate the audiences’ experience of the show, she said.

“Even if we’re in the back living our own lives, we have to be sending all this energy forward to where the scene is happening,” Papageorge said.

Papageorge brought her part to life by creating her own backstory for each of her chorus characters, she said. She calls one of her characters Evette, an 18-year-old servant girl raised in the castle alongside Anna and Elsa.

“You don’t just have to be background, you really get to breathe life into your own character,” Papageorge said.

Bracco said her favorite number in “Frozen – Live” is “Fixer Upper,” when the ensemble members get down on their knees and dance as forest trolls. Most girls would rather play a Disney princess, but Bracco welcomed the chance to take on an unexpected role for “Frozen – Live,” she said.

“I get to play to a different strength and have a little comedy and not just be a little soprano ingenue,” Bracco said.

The choreographer for “Frozen – Live,” Christopher Windom, said he borrowed inspiration from the performers in the cast to develop staging for the show. There was no precedent for the role of the ensemble that could be gleaned from the original film, he said.

“The movie is basically a series of solos and duets, and any reference to the community of Arendelle is very minimal,” Windom said. “To have the chance to expound on who these ensemble members are, that was a real privilege.”

Members of the “Frozen – Live” ensemble either focus more on dancing – like Papageorge – or on singing – like Penny and Bracco. However, Windom said he strove to create chorus choreography that highlights the strengths of every cast member. In the show’s waltz scene at the coronation ball, his choreography has extra turns and lifts for the dancers along with a simplified version for singers to belt out high notes while still contributing to the scene.

As a fan of “Frozen” since the film first came out, Penny said getting to help share the story through her performance in the ensemble is a reward in itself. In the final number for the show, the entire cast runs into the audience and gets to see the smiles of children dressed up as their favorite “Frozen” characters, she said.

“You get to see the faces of people who haven’t seen it before and they are totally jazzed,” Penny said. “It’s an honor to be a part of that.”