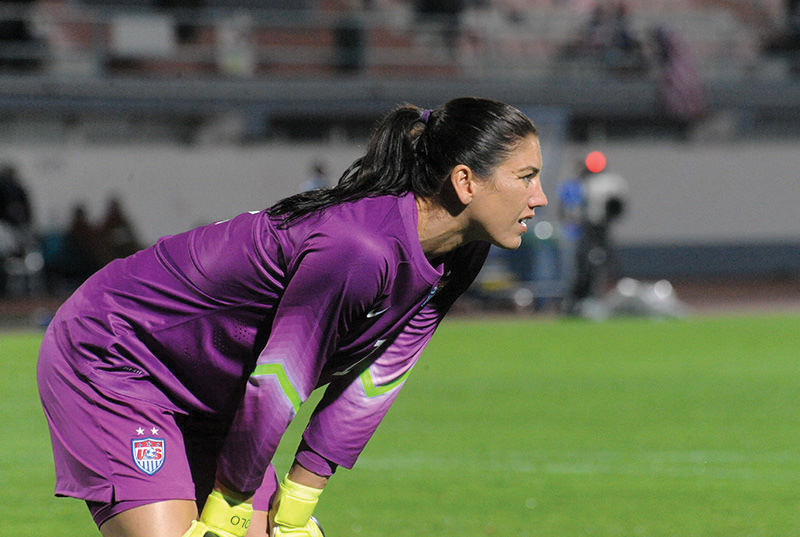 Former US Women’s National team goalie Hope Solo has been under fire for her comments after losing to Sweden in the quarterfinals. (Creative Common by Anders Henrikson via Flickr)

The Olympics officially ended last Sunday, but the scandalous storylines that surfaced during the three-week-long Games are far from over. The U.S. Soccer Federation terminated Hope Solo’s contract Wednesday after comments the famed goalie made following the U.S.’s shockingly early quarterfinal exit.

Solo called the Swedish team who beat the U.S. “cowards” for their defensive style of play and refused to apologize for doing so, even after fellow famous teammates Alex Morgan and Megan Rapinoe distanced themselves from her sentiments.

The goalie’s bold statement was characteristically brash and unsportsmanlike. For those who follow Solo’s career, it’s nothing unexpected. In fact, Solo’s brand is basically built on her notoriety for being tough – sometimes too tough.

U.S. Soccer President Sunil Gulati admitted Wednesday that the six-month suspension handed down to Solo was punishment for her lack of sportsmanship, but that prior transgressions had also been taken into account.

Solo has a history of alleged domestic violence as well and other poor-PR issues, such as getting pulled over for her husband drunkenly driving a national team car.

This is Solo’s second suspension in the last two years. The last came after Solo’s husband was arrested for that DUI, which was a questionable move but once again indicative of greater issues surrounding the goalie.

Being a fan of Hope Solo is no simple thing. On the one hand, you praise her for being so unapologetically herself, so self-assured, so indisputably talented. On the other, you question her judgement, her temperament and her leadership.

“I could not be the player I am without being the person I am, even when I haven’t made the best choices or said the right things,” Solo said in a statement Wednesday.

Honestly, same. Comments like that are what make Solo so relatable. And that’s the great oxymoron involved in supporting Hope Solo – she can be equally admirable and deplorable simultaneously. How could she say that? But also, knowing her, how could she not?

This was not a heat-of-the-moment thing. Solo meant what she said. You know people have asked her to retract and apologize, but she doesn’t. How can you not respect that?

As Solo aptly points out, those contradictions are the peril of being both a person and an athlete.

Take Ryan Lochte – he shows up in Rio as the storied rival of Michael Phelps and leaves as America’s greatest disappointment. But what did we expect? This is the guy who always claims to be himself, who uses non-words like “jeah” unironically.

To build Lochte up as some kind of role model or sports hero is to simply be misinformed.

When Hope Solo is on the field, being one of the best goalies ever, we can’t hear her speak or get a sense of how she carries herself. When she steps off the field, say, into a press conference – that’s her as a person.

I’ve criticized Solo in this column before, and to be completely clear: She’s not a saint. Some people consider her a criminal and will cheer the likely end of her national team career.

I’m not commenting on the vast legal complications plaguing Solo’s rap sheet, and I’m in no way trying to imply that her historic stat sheet in any way makes up for them.

But this time, in this particular circumstance, I think she’s right. She has a mind of her own and she is entitled to speak it. This isn’t a run-in with the law. It’s bad sportsmanship. Last I checked, that isn’t a fireable offense.