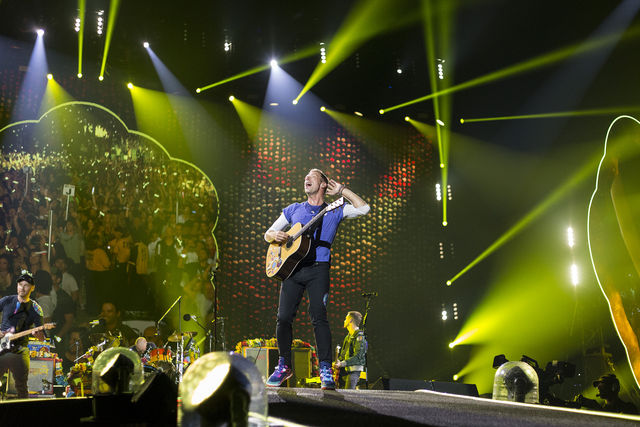 Coldplay’s “A Head Full of Dreams Concert” on Saturday night at the Rose Bowl was a spectacle of light, color and classic lively showmanship by frontman Chris Martin. (Jennifer Hu/Daily Bruin)

"A Head Full of Dreams" Tour Coldplay at the Rose Bowl

Chris Martin will never eat bananas before a concert again.

While performing at the “Head Full of Dreams” tour on Saturday, Martin apologized to fans in the packed Rose Bowl stadium for his gassiness during the first three songs. The lead singer and frontman for alternative rock band Coldplay cited his pre-performance snack as the cause of some light burps. The lighthearted snafu set the stage for the rest of the concert, a classic display of Coldplay’s spirit and showmanship.

The tour featured opening acts by Bishop Briggs, Alessia Cara and Stargate. The first artist to perform was dark pop artist Bishop Briggs, whose set highlighted driving rock rhythms and Briggs’ powerful voice. Alessia Cara took the stage after Briggs, slowing the energy of the concert with R&B pop songs like “Here” and “Four Pink Walls.” She paused between songs to explain the meanings behind her lyrics, granting insight into the millennial-generation values that influenced her work like acceptance and self-love.

Production team Stargate, who helped produce the “Head Full of Dreams” album, performed the final opening act. But Stargate’s act was hardly a live performance, as all they did was play the music videos of songs they produced. Their song selection was not well suited for the audience demographic – for example, the first song they played was an explicit version of Wiz Khalifa’s “Black and Yellow,” despite the numerous young children present in the audience.

At 9 p.m., guests’ white wristbands started to flash in rainbows, and audio of Charlie Chaplin’s monologue from “The Great Dictator” rang through the speakers and fireworks lit up the sky. Coldplay had arrived.

Coldplay opened with the tour’s title song, “A Head Full of Dreams.” Although the tour specifically promoted the “Head Full of Dreams” album, the set list included a mix of older fan favorite songs like “Yellow,” “Viva La Vida” and “Fix You,” along with newer hits like “Everglow” and “Hymn for the Weekend.” Coldplay will celebrate their 20th anniversary next month, and their concert set list skillfully wove through the band’s stylistic evolution, retracing the band’s path from its early instrumental sound  and moody lyrics with songs like “Clocks” to its current pop form and blend of instrumental and electronic sounds with songs like “Adventure of a Lifetime.”

Hearing Coldplay live was like listening to their album dialed to eleven. The band expertly read and controlled the energy of the stadium, making the music a personal experience through their lyrical stories and efforts at audience participation. They sounded just as good live as on their studio recordings, but the lights and special effects of the concert created an experience no recording could bring to life. And no Spotify session could match the interactive experience of singing along live when Martin asked the crowd to join in the choruses of the hits “Fix You” and “Don’t Panic.”

The band also used props and special effects like shimmering fireworks, flame jets and confetti throughout the performance, giving the concert the atmosphere of a celebration on par with New Year’s Eve or Independence Day. Balloons dropped into the crowd and bounced throughout the stadium like beach balls. The props were used to great effect and came unexpectedly, instantly raising the energy inside the arena.

The concert also incorporated a video clip of Muhammad Ali speaking about helping humanity and audio of Barack Obama singing “Amazing Grace,” which the band used to highlight its concert theme of love and peace. When the crowd joined the president in song, an uplifting feeling of unity and positivity flowed through the Rose Bowl.

Throughout the evening, Martin and the rest of the band appeared at ease on stage, and it was evident that it was where they belonged. Minor bloopers such as when Martin let out a banana burp or when one of his guitar strings broke during a song made the performance feel all the more authentic. They were certainly not simply relying on auto-tuning or pre-recorded tracks.

Coldplay demonstrates the appeal of concerts and the live music experience. From the career-spanning song selection to the flashing light show and audience engagement, Coldplay understands its fans and is dedicated to giving them a fully immersive performance.

“I love L.A.,” Martin said. “It’s where we had our first performance and it’s probably where we’ll have our last.”