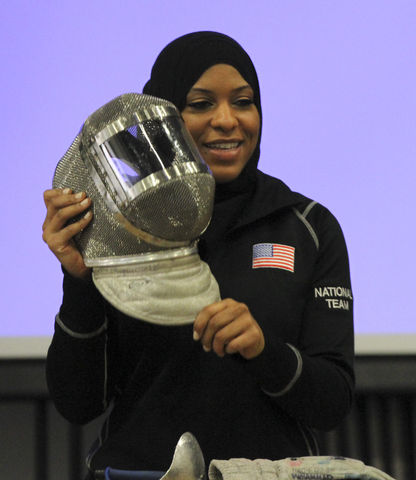 Fencer Ibtihaj Muhammad will be the first-ever American Olympian to compete while wearing a hijab. (Creative Commons photo by U.S. Embassy via Flickr)

A photo of Michael Phelps adorned my 14th birthday cake. My middle school email password was the infamous swimmer’s name. Following the 2004 Athens Olympics, I took up swim classes.

I was a big fan of Michael Phelps.

Like any kid who positions him or herself in front of NBC for two weeks every four years, I was profoundly inspired by the Olympics. Particularly by Phelps. Not because he was relatable or in any way similar to me, but because he was a modern-day, real-life superhero.

Muhammad is in Rio preparing to be the first-ever American Olympian to compete while wearing a hijab. In the run-up to the Olympics, Muhammad had to endure not only the grueling training that all Olympians go through but also the xenophobic and racist insults Muslims in the U.S. have been subjected to while Donald Trump has run for President.

Personally, I think that kind of perseverance deserves to be rewarded. Not that Phelps hasn’t survived his own adversity, but I think we can all agree that was mostly self-made.

The Olympics are based around national pride and in a dangerously nationalistic pride of a different variety, I think it would have been momentous to honor Muhammad not just as an American, not just as an athlete, but as a symbol of everything the U.S. claims to be.

The Games are “supposed to be” devoid of political statements, but they never have been. The entire USA boycotted 1980. Members of USA Track and Field protested the lack of human rights in America during the 1968 Games. Even this year, members of the women’s soccer team threatened to forgo the Olympics in the fight for equal pay.

Athletes have always found ways – through accessorizing their uniforms, accepting their medals in a certain way, or speaking their minds at press conferences – to use the Olympic stage as a way to amplify particular messages. The Olympics are supposed to be sports at their prime, and athletes who take those kinds of stands are examples of the best that sports have to offer.

I think that Team USA could have taken a stand on Friday, but it missed the opportunity.