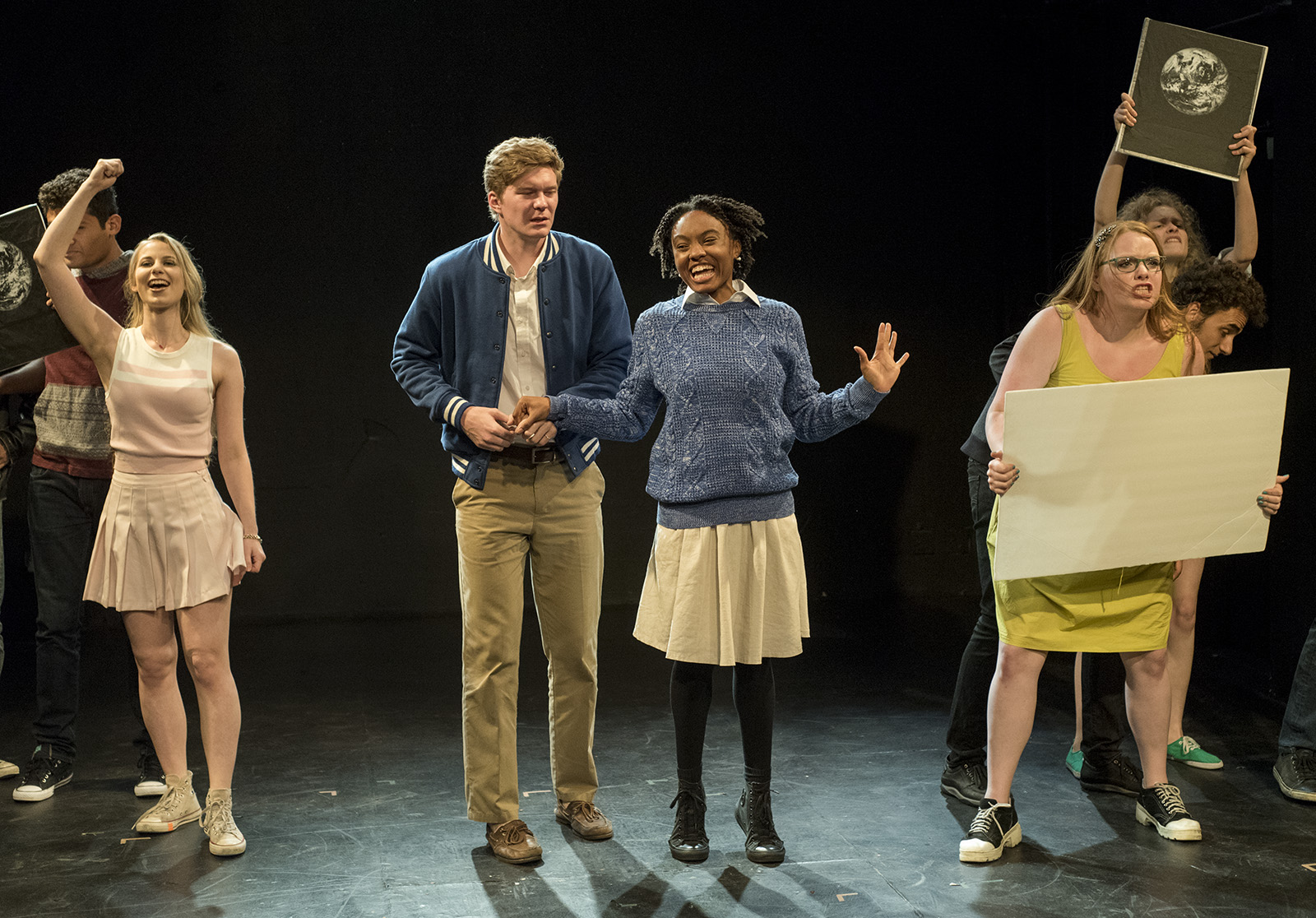 Graduate student Tara Turnbull wrote, directed and produced “The Sunrise Club,” which tells the story of a group of students experiencing their last sunrise on Earth before moving to another planet. Turnbull said the plot was inspired by the impacts humans can have on Earth’s ecology and the possible consequences. (Shelby Scoggins/Daily Bruin)

Tara Turnbull first thought of the idea for her play during a high school science class.

She sat on a stiff stool at a long black lab table when a vision came to her: two students sitting on a hilltop, talking about life. The daydream marked the beginning of “The Sunrise Club,” a play that she directed, produced, wrote and scored over the course of five years.

Turnbull, a second-year MFA student, will perform in “The Sunrise Cub” at the Los Angeles Theatre Center throughout July. The play tells the tale of a group of students who experience their last sunrises on Earth before moving to a new planet to escape the highly polluted, barely breathable air. She plays the main character, Madeline Rose, who climbs to the Top Of The World to watch the sun come up before leaving Earth.

During her orientation at UCLA, Turnbull was in her apartment listening to the news about Americans’ fear of going back to war in the Middle East. As the sound echoed in her new apartment, veterans protested the war outside her window.

“The future seemed so bright (at UCLA), while other people around me weren’t even sure if there was going to be a future,” Turnbull said.

This event was another source of inspiration for “The Sunrise Club.” Turnbull said the message was relevant in that her play raises awareness about the ecological dangers our planet faces. She could not help but advocate for the planet she lives on and loves, she said.

When the graduate student in acting began her second year at UCLA in 2015, she decided it was time to turn her drafts of dialogues and notebook scribbles into a real production.

“The want started turning into a need,” Turnbull said.

Turnbull composed the songs featured in the play with help from a sound designer she met after picking up his loose flyer lying in Melnitz Hall. Her songs are not traditional, as she added sounds of plates and utensils clinking to epitomize the busy cafés for certain scenes, she said.

Creating the play was a process of constant editing, Turnbull said. Walking around at night, she would see something interesting, like a strange tree, and go back to her notes to add the detail to the script.

“Throughout the years, I worked on it continuously, coming back to it when I had a new idea,” Turnbull said. “I’ve enjoyed having the time and space.”

She then put out an online open casting call on backstage.com where actors sang a song of their choice and created an improvisation based on “The Hollow Men” by T.S. Eliot, a poem Turnbull thought tied back to “The Sunrise Club.”

“(Turnbull) flew me in from Philadelphia and took care of finding a place for me to stay,” said Madelyn Reilly, an actress in the production. “She didn’t care where the actors came from, she just wanted the perfect fit for the roles.”

The actors, who come from LA to New York, rehearsed online for months through video conference table readings, Turnbull said. They started in-person rehearsals in LA on May 29. They searched for their own rehearsal spaces at first, trying to cram the 13 cast members into the elevators of Macgowan Hall when they couldn’t find available classrooms.

Turnbull said she filmed herself practicing to improve her acting so rehearsals would be entirely devoted to the other actors.

“I would add myself to the scenes last, wherever I could fit, to not disturb the placement of the actors on stage,” Turnbull said.

During production Turnbull faced several challenges, from changing stage sizes to cast members being unable to renew visas in time to fly to LA.

Despite the struggles the cast and crew faced, Turnbull never showed her stress, said Nick Provender, who plays The Barista, one of the less emotional and serious characters.

“She was always on her feet, no matter what issues came up,” said Jaaron Jennings, who plays Brandon, a timid high schooler with many insecurities.

Rafael Miguel, who plays Max, a strange and mysterious boy, said Turnbull’s strength as a director came from the clarity of vision she had – really knowing the skeleton of the play.

Turnbull said she would like the audience to walk out of the theater and look up to the sky in a way they had never before. “The Sunrise Club” should make people rethink how they see the world, and realize how vast and beautiful it is, she said.

Turnbull said that as time passes, she becomes a better planner and preparer and hopes to stage “The Sunrise Club” again in the future.

“I hope the show will see many more stages,” Turnbull said. “‘The Sunrise Club’ is a process – it’s never really finished.”