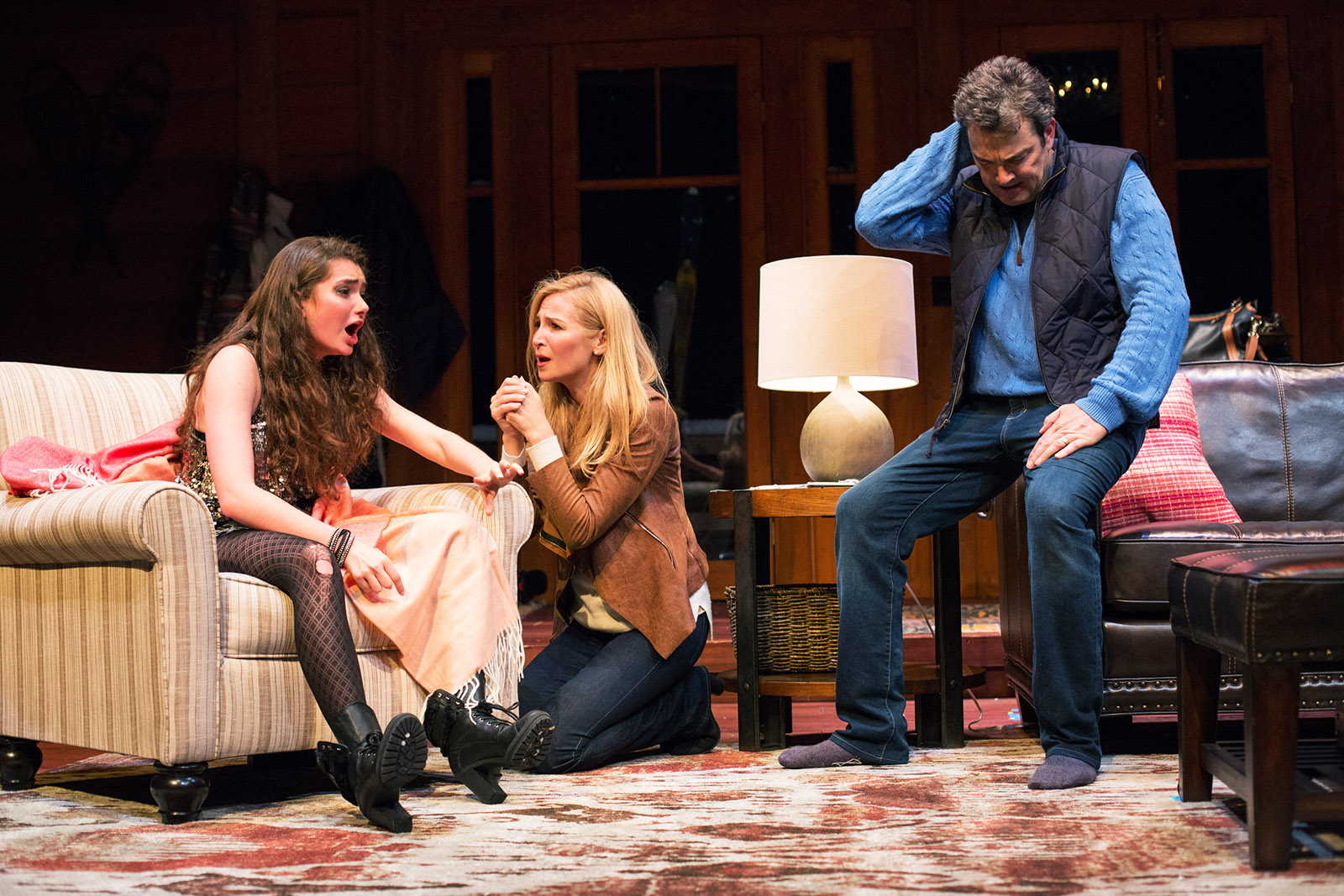 “Big Sky” makes even the most dysfunctional of families look cuddly in comparison.

The Geffen Playhouse’s latest show is hilarious and touching; there is something horrible yet intriguing about being privy to another person’s dirty laundry.

Share in a fictional family’s onstage despair with the immersive play “Big Sky,” which opened June 7 and runs until July 17. It blends biting comedy and tense family drama through intelligent writing and natural acting.

The play, which won the Edgerton Foundation New Play Award, follows the lives of Jen, Jack, their daughter Tessa and Jen’s longtime friend Jonathan during a weekend getaway to Aspen, Colorado.

In the play’s opening, Jack dips in and out of the Colorado cabin as he tries to land a job after a long spell of unemployment and depression. Jen reveals to Jonathan that she is having an affair with a former patient she met while volunteering at a hospice clinic and that she is thinking of leaving Jack.

Toward the end of the first act, attention shifts away from Jen and Jack’s strained marriage and explores the personalities of Tessa and Jonathan. Teenager Tessa confides in Jonathan that she has been sleeping with her twenty-something Native American boyfriend, feels deeply involved with his tribe’s spiritual philosophy and is discontent with the humdrum life her parents have imagined for her.

Jonathan, by far the most neutral and likable character, is placed in the awkward position of keeping secrets while awaiting an investment to help him start a business. The secrets and pent-up anger come out in the second act when a blizzard traps the family inside their cabin. Without power, they are forced to confront their damaged lives.

The tone becomes heavier as the jokes come less, often in exchange for more dramatic dialogue forcing the characters to deal with their problems. The shift from a light comedic tone in the first act to the intense drama of the second is a bit jarring. Although the shift necessarily follows the path of the story, more comedic moments could have broken up tension later in the play.

“Big Sky” opens in the middle of the trip without much patronizing backstory, instead relying on the audience to pick up on relationships and relevant details through context and natural dialogue that, unlike some other scripts, does not feel forced. The result is an authentic play, as if the audience is looking in on the lives of characters who already seem fully defined from the outset.

It takes a while to fully understand the interpersonal dynamics of the characters because of the story’s pacing, but allowing viewers to work out the details on their own is a welcome change from modern entertainment that panders to audiences with a spoon-fed back story. Rather than front-loading details and exposition into the first few minutes of the play, information is spaced out. For example, the true extent of Jack’s desperation and history of unemployment is only revealed toward the end.

Each of the play’s actors was convincing in his or her role. Through a violent rage, Jack (Jon Tenney) oozes the desperation and anger of a man who is failing to provide for his family through his commanding stage presence and line delivery. Through the pleading desperation in her voice and her slumped, crumpled posture, Jennifer Westfeldt owns the uncertainty and sense of crisis that her character Jen struggles to overcome.

Jonathan (Arnie Burton) stole the show as Jen’s hilarious and good-spirited best friend and the universal confidant whose loyalty and self-interest put him in a place of conflict. Burton delivers his lines with the affable swagger of a man who knows how to win over an audience with charm and precise comedic timing.

The emotional intensity of the actors was paired with a simple yet homely set and sparse use of background audio. The combination complemented the gravity and irony of the play.

The luxurious wooden cabin and serene view of the snowy forest background lulled the audience into a deceptive sense of tranquility. When the snowstorm begins, the winds howl via audio track and punctuate the play’s most tense moments, underscoring the hostility that defines the characters’ relationships.

“Big Sky” is a thoughtfully critical play that blends intelligent humor with the messy drama of modern family life. Its sharp writing and vulnerably human acting will leave the audience wondering if the characters will be all right.