Claire-ification: Collegiate athletes’ freedom of speech should not be silenced 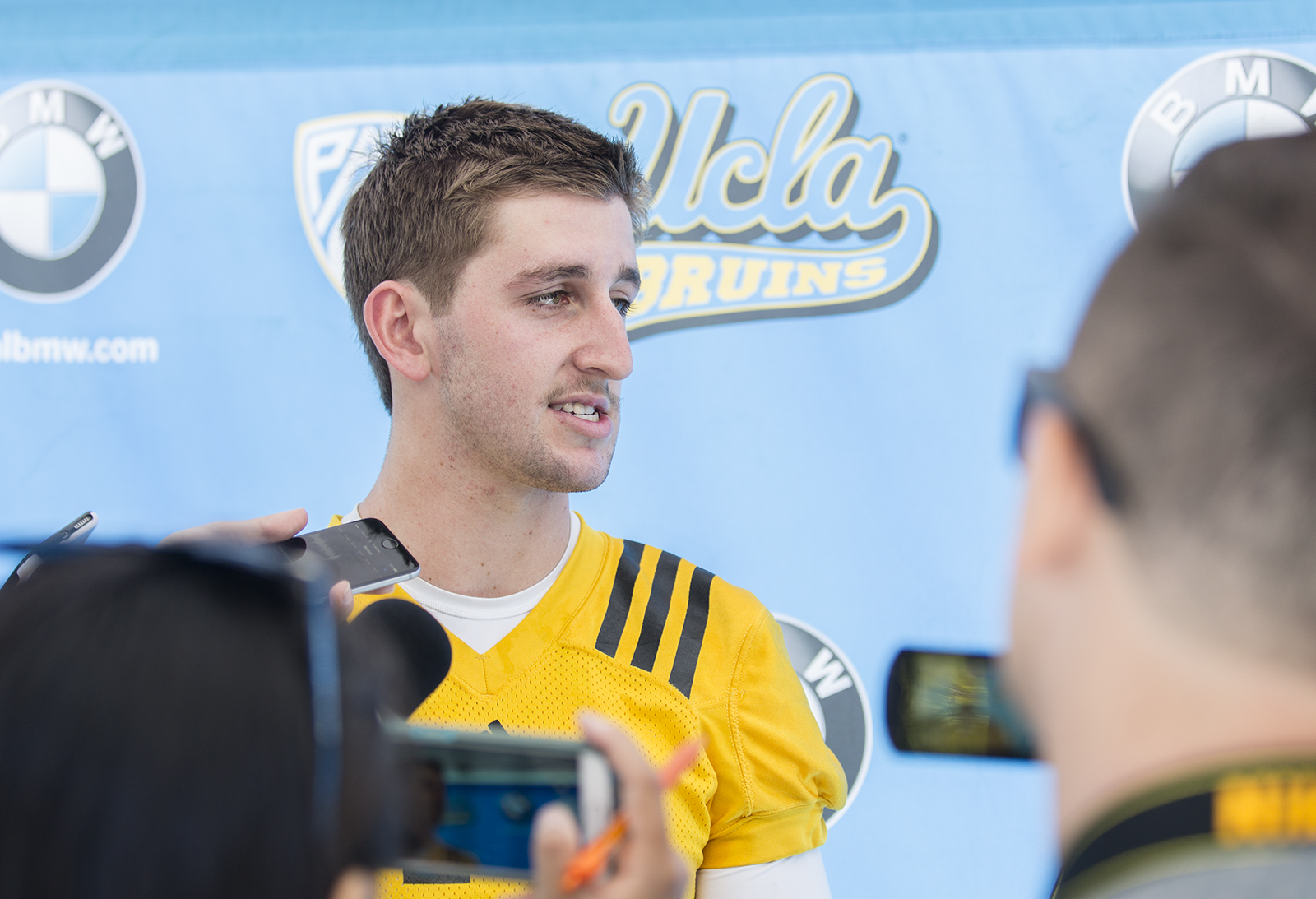 Quarterback Josh Rosen caused a stir first with his hot tub post and then a political statement against Donald Trump. Rosen responded to UCLA’s record deal with Under Armour by reminding everyone that college athletes are still amateurs. (Jintak Han/Daily Bruin)

We have a running tally in the sports section of all the clichéd responses we receive during interviews. When training new writers, we place special emphasis on answers that don’t count as answers because they are so unoriginal.

The dynamic between reporters with hard questions and athletes with soft answers is so ingrained in sports culture that it has become a stereotype of its own. Movies like Bull Durham showcase scenes in which players are trained to avoid answering questions truthfully, instead providing stock quotes.

I think that, particularly at the collegiate level, athletic communications directors and coaching personnel are afraid of what athletes would say if left to their own devices. What if Josh Rosen told us what he really felt? Or Bryce Alford? Jordin Canada?

Well, Rosen did actually tell us how he really felt about something a couple weeks back. While golfing at Trump National Golf Club on April 10, Rosen posted a picture on Instagram that showed him wearing a hat with the words “F–k Trump.” It was a political statement, and a bold one, considering Rosen was availing himself of Trump-provided facilities.

Immediately following the incident, Rosen changed the caption to say something about how he respected all candidates currently running for president and was looking forward to seeing the democratic process play out. He has since changed it once again, this time to “F&%k Trump.”

Football coach Jim Mora strongly criticized that move May 20 when he appeared on the Rich Eisen Show. When asked about how he was guiding Rosen – already a top draft prospect after just one year at UCLA – Mora said that the young quarterback had to decide who he wanted to be like: Johnny Manziel, an unemployed, hard-partying ex-NFL quarterback, or Tom Brady, a multi-national championship winner and MVP.

Mora essentially equated posting a humorous photo with a potentially serious message to developing substance abuse issues. Manziel has checked into rehab twice in the past year. Are Rosen’s political views really as harmful to his professional career as a drug problem?

This leads me to my point – are we stripping athletes of their right to free speech?

Rarely, if ever, do you see the kind of candor exhibited by Richard Sherman when discussing the state of the student-athlete education or by former UCLA football player Chris Kluwe when he voiced his support of gay marriage, at the college level. Division I athletes coming out is rare, and when they do, pundits speculate about how their draft stock might be affected.

It seems ever-increasingly clear to me that college football is a multi-million dollar business whose greatest enemies are honesty and authenticity.

When Caleb Benenoch tweets that the NCAA should help him pay his rent – the closest thing we’d seen to an opinion from a major UCLA athlete other than Rosen – suddenly he’s unavailable to the media for the foreseeable future.

So concerned are athletic institutions with their image, that the athletes who provide their very existence are silenced. The lives of student-athletes can’t improve if they can’t tell us what’s wrong.

Luckily, it seems that Rosen refuses to fall in line – at least to a degree. The quarterback’s approach to social media, which Mora sees as an evil invention, is to post first, apologize later.

I’m not actually a huge fan of Rosen’s social media presence, what with the hot tubs and the girls from Arizona, and he’s one of the worst when it comes to dodging questions. Rosen was rarely a good quote last season and seemed devoted to portraying himself as a stereotypical quarterback.

The freshman was a man of few words, but only when he was allowed to be a man of any words at all. The media was barred from Rosen during his first six months with the team, gaining access to him for the first time following the Virginia game Sept. 5.

But even the hot tub scandal points to the fact that when it comes to Instagram, Rosen wants to be himself, and no one is going to tell him otherwise.

Following the announcement of UCLA’s 15-year, $280 million contract with Under Armour Tuesday, Rosen posted a graphic of the largest-ever collegiate sports apparel deals and wrote “We’re still amateurs though … Gotta love non-profts #NCAA.” That boy has a way with captions.

The post disappeared swiftly, but it’s hard to believe Rosen expected anything different. He knows that in this day and age everything he posts is screen-shotted within seconds of it going live. It doesn’t matter that he changed his caption or deleted his post – his message is still out there.

Like I said, we here in the sports section are well-versed in sports clichés. Lucky for us, Josh Rosen’s recent Instagram captions are in a league of their own.