The Quad: UCLA’s David Geffen Square proposal is a cry for money 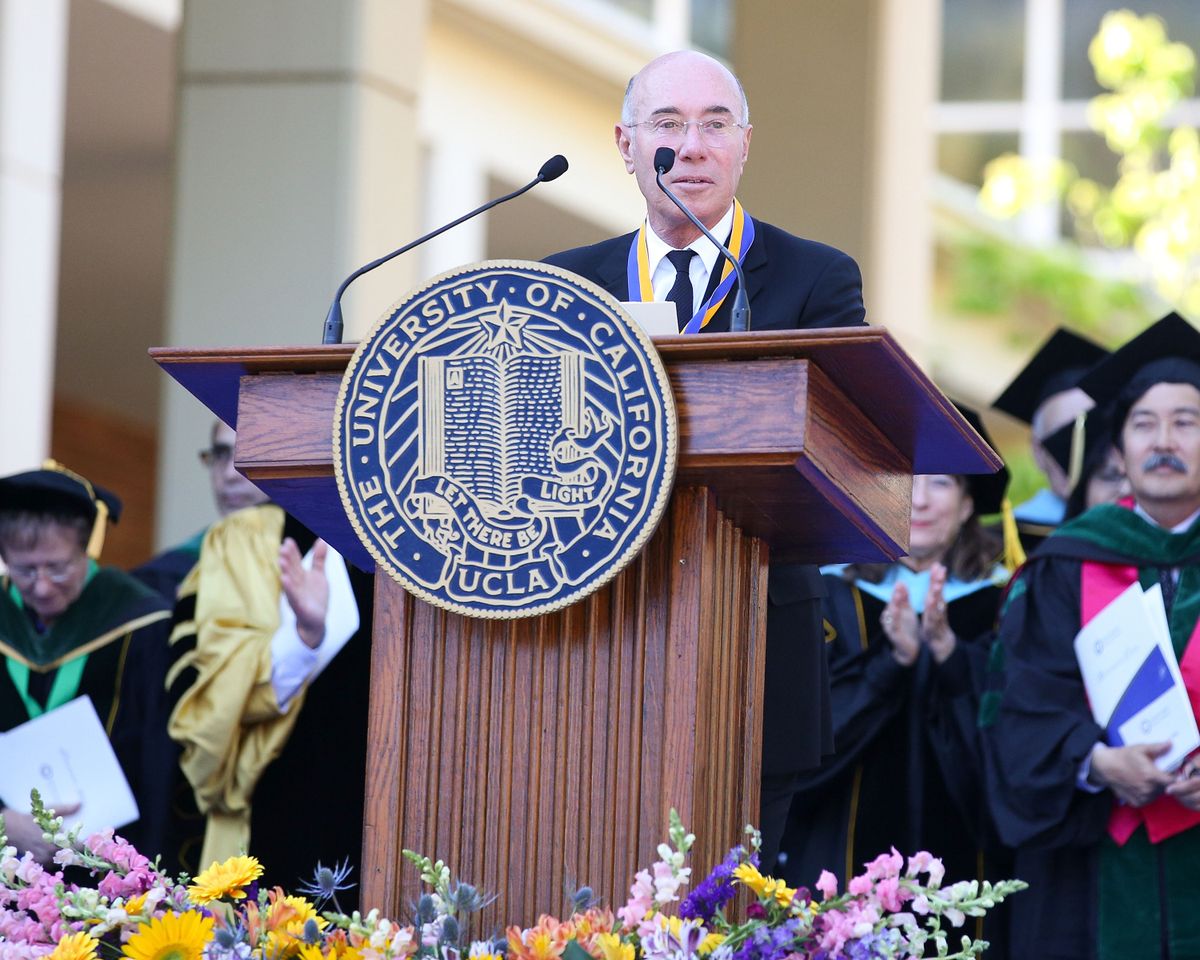 Philanthropist David Geffen addresses medical school graduates in 2014. UCLA is asking the city to commemorate an intersection near campus after Geffen, who is the university’s most generous individual donor. (Courtesy of UCLA)

UCLA, in an innovative and bold move in higher education, isn’t even waiting for the donation before doing the renaming anymore. Naturally, it involves David Geffen.

The ever-growing list of things named after the “World’s Worst Philanthropist” is poised to expand again if the city of LA approves a proposal – which has been met with mixed reaction – by the university to name the off-campus intersection of Le Conte and Tiverton avenues after the entertainment mogul and all-time top individual donor to UCLA.

That’s right. UCLA is so desperate, they’re trying to name something that the University of California doesn’t even own. I say desperation, because neither the university nor Westwood Village gains anything from this random and somewhat inappropriate commemoration. While there’s little doubt that Geffen wouldn’t be upset about having something else bear his name, even he might realize that having the UCLA medical school, UCLA-owned theater, and forthcoming UCLA secondary school already bear his namesake is too much Geffen for one place.

There’s nothing wrong with renaming streets and intersections in itself – both on and off campus. It happens all the time. The campus road once named Circle Drive was renamed in 1998 after longtime chancellor Charles E. Young retired the year prior. The research library in North Campus, of course, is named after him too; both are well-deserved because he worked to dramatically increase the school’s national prominence and international influence in his nearly-three decade leadership tenure.

When it comes to renamed streets outside of campus, a segment of 11th Street that cuts between the Staples Center and LA Live entertainment venues is named after Chick Hearn, the legendary basketball announcer who changed the way Americans consumed the sport and how we speak in general.

Geffen is an influencer in his industry, but he’s no Charles Young. Of course, there’s no rule against renaming anything after a rich person, and universities are allowed to advocate and lobby for causes, even those as trivial as those that involve the installation of a metal sign. But the Westwood Neighborhood Council vice president is right for suggesting that these permanent public commemorations are “not given to people who write big donor checks.” Geffen’s philanthropy is impressive, if not a bit cloying in its utter lack of subtlety or anonymity, but in terms of his record in public service, he probably hasn’t done much more than pay his fair share in taxes.

Actually, scratch that: He was one of the few Americans named in the Panama Papers.

However minor this action is by UCLA, students and California residents probably won’t be thrilled that tuition dollars and taxes are being spent on university staffers to push thinly disguised efforts to close that $1.6 billion gap on the UCLA Centennial Campaign website. Even if Geffen were to donate again following this act of generosity by UCLA, it wouldn’t help the school’s place in the college rankings we all seem to obsess over: the U.S. News & World Report only factors in contributions by alumni into its rankings methodology. Geffen has neither attended nor received a degree from UCLA, though he has pretended to be an alumnus early in his career.

Given the way things are going, though, maybe UCLA will award him that honorary degree soon enough.