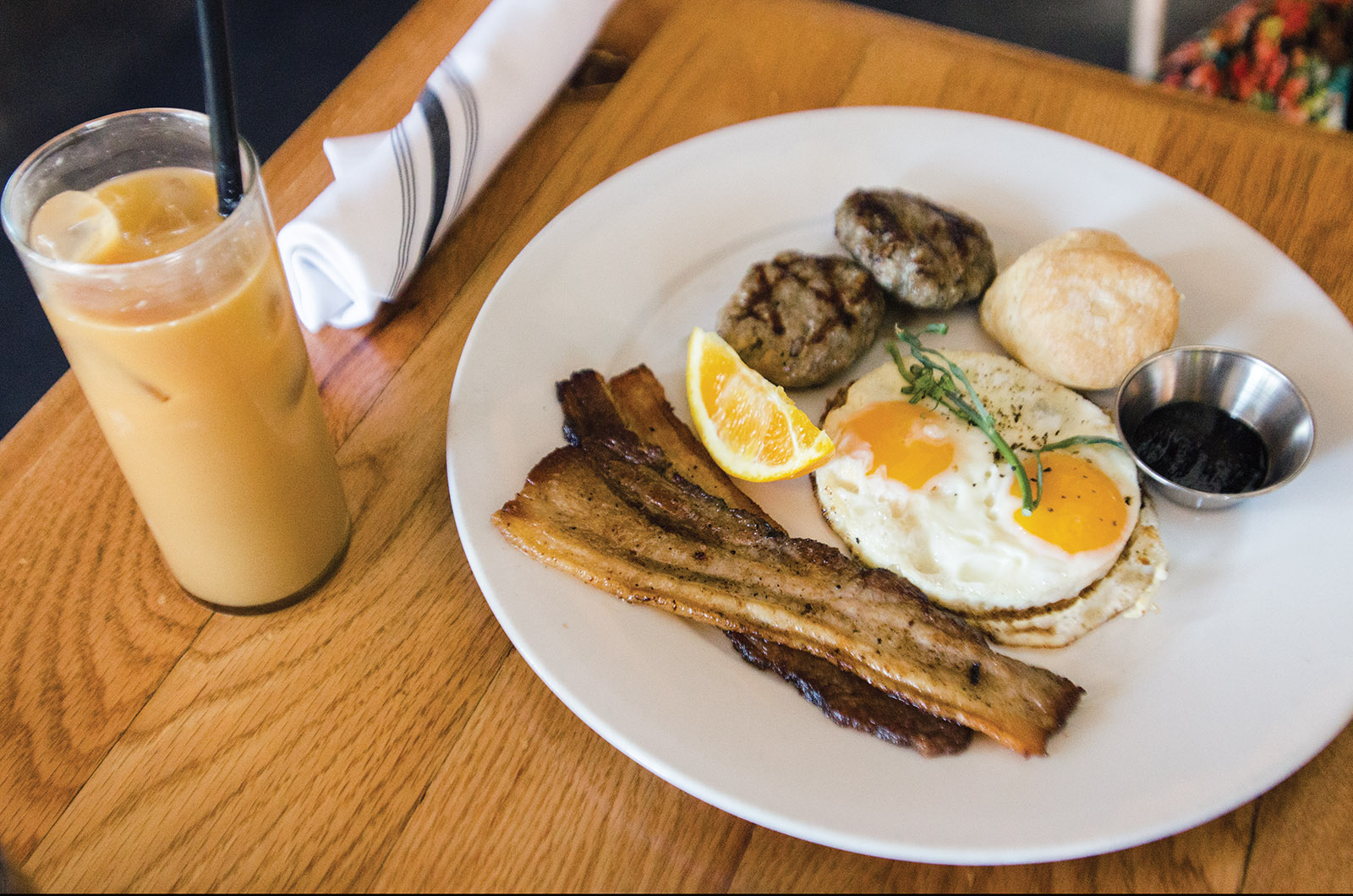 The popular 2x2x2 meal at Salt’s Cure in Hollywood is made of up two sausage, two pieces of bacon, two eggs and a biscuit with jam. The thick, soft strips of bacon were impressive and resembled slices of pork ribs in texture and flavor. (Miriam Bribiesca/Assistant Photo Editor)

The interior design of Salt’s Cure fits the city warehouse theme, but its food is rustic country all the way. Located on Highland Avenue in Hollywood, Salt’s Cure was on a few lists of top brunch spots in Los Angeles, enticing the novice brunch-eater that I am.

The hip brunch locale uses California-grown ingredients, and it butchers its meat in–house. Thus, the restaurant’s name no doubt refers to the stars of its menu: the savory dishes. Salt’s Cure tempts sweet-tooths with pastry treats like the grapefruit pie and oatmeal griddle cakes, but diners should resist and opt for the proteins.

My meal, the popular 2x2x2, dished out two sausages, two pieces of bacon, two eggs and a biscuit with jam for $15. Although the loaded plate first overwhelmed me with many greasy chunks of food, I forgave the presentation after tasting the bacon.

I’m not one of those bacon people who loves bacon-flavored everything like lip balm, candy or soap. I generally avoid it both because of health and because I’ve never adored its smoky flavor save for the occasional split-pea soup or bacon maple donut.

However, Salt’s Cure’s bacon was on another level. The strips were thick and soft, more like thin slices of pork ribs in texture and flavor, impressing the Pacific Northwesterner in me.

It was not overly salty or crispy like in the UCLA dining halls, but it was tender, as if my dad barbecued it fresh at a cabin. I’m going to need a medical cure from all the grease at Salt’s Cure.

The two sausage patties also came without the disgusting casings or the hardened, compact texture of processed meat. Washed down with cold brew coffee, the sausages were juicy with a powerful, peppered taste. The first herby bite was strong, but chewing balanced out the warm sausage’s well-seasoned flavors.

However, my dish went wrong with the eggs, which the employee said must be served sunny-side up in spite of my request to have them poached. The two eggs, cooked in a circular mold, arrived overdone. The bottom was crunchy with flakes of brown crisps, the white bubbled with the scars of overheating, and the precious yolks were hardened to a disappointing light-yellow powder underneath. I salvaged the tops of my yolks, spreading the gooeyness with a fork on the rest of the egg.

After learning on Yelp that another customer received overdone eggs, I realized the style might be part of Salt’s Cure’s authenticity as a rustic, hearty brunch hot spot. The chewy eggs surprised me because I’m accustomed to runny ones, but perhaps some diners find charm in the obviously home-cooked, albeit flawed, eggs. Unfortunately, I was not among them.

Sweeter items were pleasant, though not as memorable as the salty. Three oatmeal pancakes topped with a dollop of melting brown sugar sent a wave of maple through my mouth. Despite a charred look, the pancakes were not burned, but moist, and they fell apart under the weight of my fork. They tasted of pecans, though perhaps my taste buds just assumed that brown sugar pairs with nuttiness.

I left content Saturday morning with only grease remaining on the plate. Salt’s Cure’s name may allude to the curation process of its signature meat, but it also cures customers on a relaxing late morning with a dose of the famous brunch culture of Los Angeles.