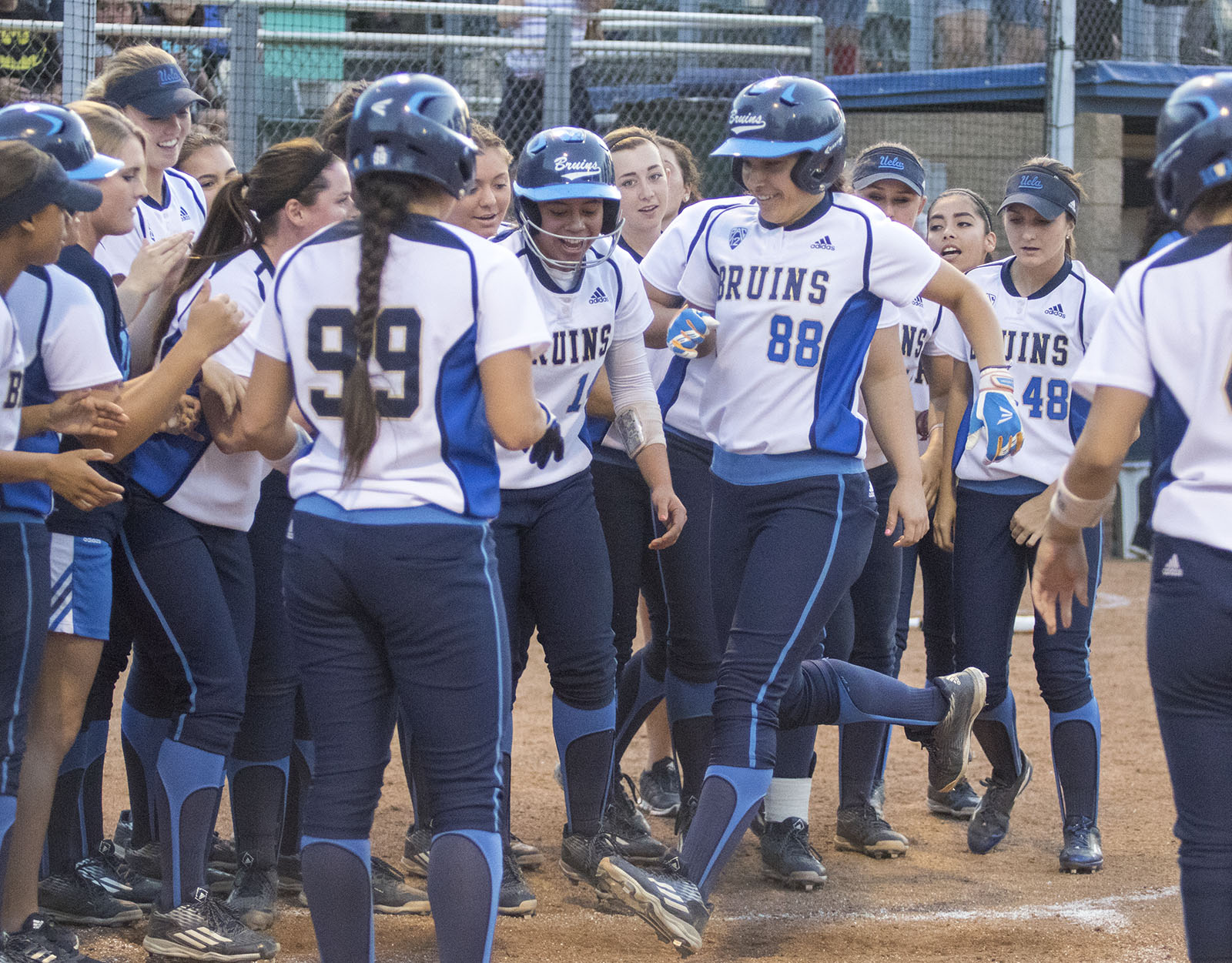 2015 All-Pac-12 Freshman Madeline Jelenicki has continued to impress in her second season. The sophomore utility/catcher is hitting .311 with nine home runs and is second on the team in RBIs with 38. (Ken Shin/Daily Bruin)

Madeline Jelenicki had a solid freshman season. Named All-Pac-12 Freshman for the 2015 season, the 5-foot-9-inch utility/catcher made an immediate impact on UCLA Softball.

She hit .282 with nine home runs and was fourth in RBIs on the team with 47. Now in her second season, Jelenicki has surged, putting a together a very strong offensive performance this season.

After the Oregon State series last weekend, Jelenicki is hitting .311 on the season with nine home runs and is second on the team in RBIs with 38, only behind junior All-American Delaney Spaulding.

Even more important for the team, Jelenicki is stepping up during crucial moments for the Bruins. Saturday, the sophomore led the offensive attack that rallied past the Beavers in a 7-5 comeback win.

It started in the fourth when Jelenicki hit a game-tying two-run homer to push it to two a piece. Then in the fifth, Jelenicki hit the first pitch she saw into left field to drive in Kylee Perez and Spaulding to tie it up again at 5.

“I was trying to do whatever I can for the team. Sometimes you come through and sometimes you don’t,” Jelenicki said about her performance after Saturday’s game. “It feels good to come out for the team and give our pitchers some run support.”

Another game where Jelenicki sparked a similar offensive rally was in the April 9 game against Stanford, where she notched two important RBIs in the Bruins’ win over the Cardinal. The first came off a fielder’s choice to shortstop that brought in senior Allexis Bennett. The second was the go-ahead run off a single that drove in senior Mysha Sataraka.

These were instances where Jelenicki was swinging for power, but she is a complete batter, often being very unpredictable. At one at-bat she is swinging for the fences – currently posting a .623 slugging percentage for third on the team – but then in the next at-bat she is laying down the sacrifice bunt, trying to advance the runners. She’s a power hitter that sacrifices some of her power potential in order to set up RBI situations for the rest of the team.

In the Bruins’ last midweek game against CSUN, where she already hit a double to drive in freshman Imani Johnson, Jelenicki laid down a sacrifice bunt to advance Spaulding and Sataraka. Spaulding was eventually batted in, pushing the Bruins’ lead even further, something that would have been difficult had Jelenicki not put Spaulding in scoring position.

Right now the sophomore is on pace to surpass last season’s offensive stats and make a case for All-Team honors.

Pac-12 Standings
UCLA is two games outside of first place behind Oregon in the Pac-12. The Bruins – 4-1 in weekend series – have three more left before the end of the conference play to catch up. Also, No. 13 in the country and No. 14 in RPI, UCLA is looking for a chance to host an NCAA regional. The NCAA picks the top-16 teams to host.

Email Placet at [email protected] or tweet him @kplacet.