The Quad: Cal vs. UCLA 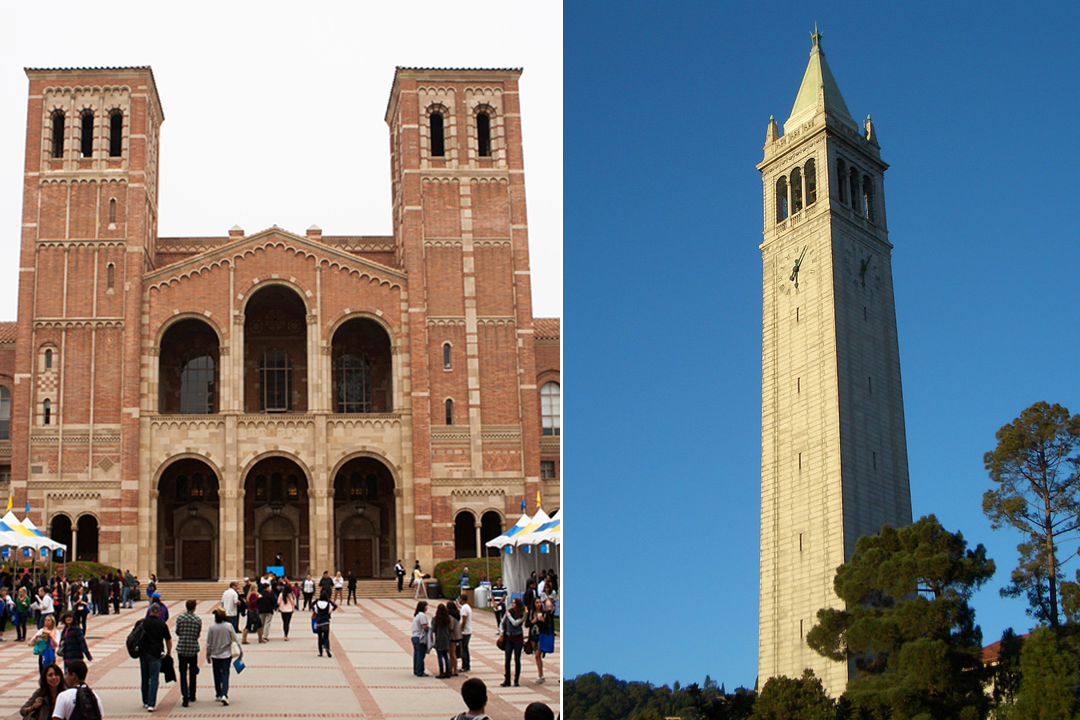 For some lucky high school seniors, the impending May 1 deadline that is national college decision day will be a decision between UCLA, UC Berkeley and other top schools. The hardworking students who face the dilemma of choosing between the two top-ranked public universities in the United States may simply be told by well-intending high school counselors that “you’ll be fine no matter which one you choose.” This was a decision I had to make almost exactly a year ago; here’s how you should make yours.

Personally, UCLA had been my dream school since I toured the campus my junior year of high school. After I visited Los Angeles, a part of me didn’t want to get into Berkeley just so I wouldn’t have to make this difficult decision; I reasoned that I’d never have to worry about making the wrong decision if Berkeley wasn’t an option.

This is a decision that determines the next four (and possibly more) extremely important years of your life, and despite what high school counselors say, it matters. As a disclaimer, I’m not saying that one school is definitively better than the other, which is why this is a complicated matter.

Look beyond the academics

It’s true that academically and career-wise, you really can’t go wrong with either school – both provide a high-quality education and a reputable degree.

Yes, some programs are stronger at Berkeley, and others are better at UCLA, although most programs are tantamount to each other. For example, if you’re an engineer, Berkeley’s engineering school is ranked higher than UCLA’s, while UCLA’s psychology program is ranked higher than Berkeley’s. Although this should play a factor in the decision-making process, it shouldn’t be the decisive factor, especially since many students end up switching majors in college. In addition, if you’re not happy or comfortable at college, the quality of your major department is the least of your worries.

Take the tips of strangers on the Internet with a grain of salt, as you shouldn’t base your decision on why others chose a certain school. Every college has both satisfied and unsatisfied students, and reading these praises and lamentations can impart the wrong idea. I get it – you’re hungry for whatever information is out there, but it allows you to cherry-pick information that already supports your bias, whether this happens consciously or subconsciously.

Do the research yourself

If you know your major, you can get a better idea of the pre-major requirements, what the program entails, the classes you’d need to take and the GPA needed to declare the major.

To give you a head start in the research on the differences between these schools, here are some crucial differences between the two. UC Berkeley uses a semester system, while UCLA uses a quarter system. This means that Berkeley’s school year is split into two 16-week periods, and UCLA is split into three 10-week periods. Another significant difference that impacts the dynamics of the student body is that UCLA’s dorms are concentrated in one location, while Berkeley’s dorms are spread apart and a part of the city. Similarly, UCLA’s campus is more compact and Berkeley’s campus is more spread out.

Even if you think one of the schools is your dream school, keep an open mind and at least give the other a chance. Visiting the schools is the best way to figure out which one would be better for you because the experience humanizes the facts and statistics.

Taking a campus tour is a good place to start. However, exploring the campus yourself would be conducive, since the tour is essentially a glorified advertisement for the school. Tours are also sometimes overwhelming because of the rapid pace and information overload. By wandering around, you’ll be able to observe the students in their natural habitat and daily routine and take in the school at your own pace.

I had my heart set on UCLA but decided to visit Berkeley after getting in just to be 100 percent confident in my decision. Unlike many who visited both campuses and immediately loved one and hated the other, I ended up liking Berkeley a lot more than I thought I would, but still not as much as I liked UCLA. In the end, I went with my gut and picked the school that I thought suited me better.

I liked the quarter system and campus layout more, but above all else, I simply loved the vibe of UCLA. When I visited UCLA during my junior year, it happened to be finals week. If the tour guide didn’t tell us that, I would’ve never known, because all the students still seemed so cheerful and carefree. Although now I know that they were probably dying on the inside, the students’ attitude still reflects the nature of this school.

Sometimes when I’m not in the best mood, I can’t help thinking about what my life would’ve been like at Berkeley and wonder if I would’ve been happier there. However, this thought is always fleeting and goes away as quickly as it comes because I’m certain that I made the right decision. I can’t imagine what my life would be like had I not chosen UCLA, but that’s okay – I don’t have to.

To the students that got into both UCLA and Berkeley: You have put in too much work to mess up this last step and not make the right decision for yourself. One day, this decision will merely be a distant memory and an interesting conversation topic at your choice college.