Aram Ghoogasian: UC must do more to protect students from discrimination 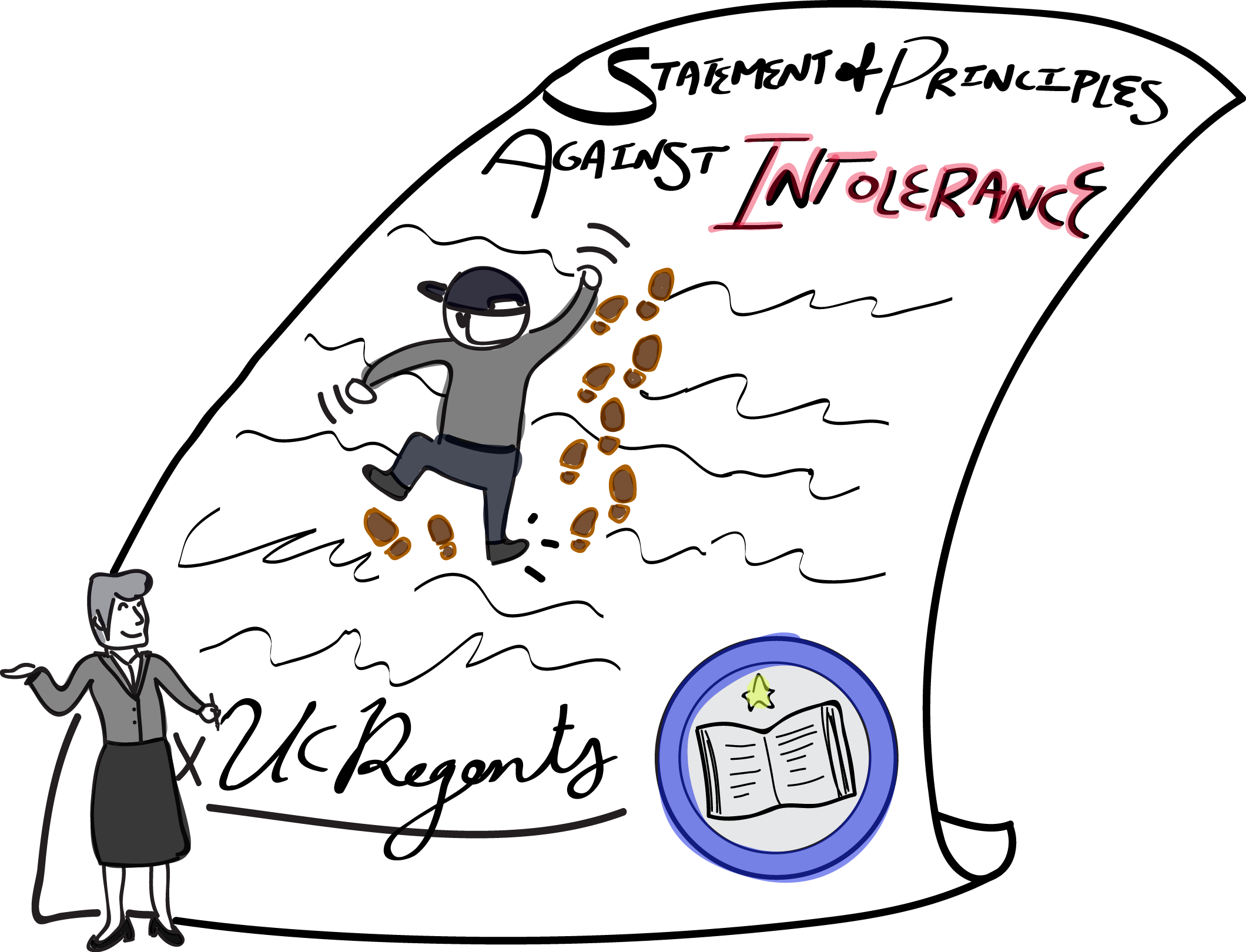 The University of California Board of Regents’ attempt to condemn bigotry was as ill-conceived as it was mismanaged.

Myriad media outlets published columns criticizing the Final Report of the Regents Working Group on Principles Against Intolerance, which claimed anti-Zionism is a form of discrimination that has “no place at the University of California,” resulting in a well-deserved public relations fiasco. Later, a member of the working group amended the language, changing “anti-Zionism” to “anti-Semitic forms of anti-Zionism” to pacify the public outcry, arguably adding even more ambiguity than before.

But many failed to mention that the board spent far too much time – seven months according to Student Regent Avi Oved, who didn’t respond to a request for comment – on this spectacle when it should have diverted its attention toward actually enforcing existing policy. The UC’s Policies Applying to Campus Activities, Organizations and Students, for example, already gives administrators the power to discipline students for impairing other students’ access to university programs on the basis of said students’ race, ethnicity, religion and other identity-based categories.

It may be worth having a genuine conversation about how to deal with bigoted speech. But the board’s misguided attempt to tackle the problem came at a time when the UC has not figured out how to protect its own students from discrimination, let alone from people’s words.

Rather than discussing “intolerant speech and acts” in the unsubstantial way the final report does, the regents must prioritize dealing with discriminatory actions, the incidents that go beyond speech alone. Adequately addressing both at the same time may be possible, but that’s clearly not what happened in this case.

This entire process originally began in response to concerns about anti-Semitism on UC campuses, as the final report points out. But what the report neglected to mention is that the regents and UC administrators themselves are complicit in the proliferation of these incidents.

Last February, Rachel Beyda was temporarily denied a seat on UCLA’s undergraduate Judicial Board when four Undergraduate Students Association Council members voted against her appointment, citing nothing of note other than her Jewish identity as a reason for doing so.

The council members wrote a sorry excuse for an apology and submitted it to the Daily Bruin. The four gained some notoriety in the national press, some embarrassment and less-than-kind emails in their inboxes, but that’s where the punishment stopped.

Despite the clear violation of the aforementioned policy against discrimination, the UC did nothing about it. Chancellor Gene Block issued a statement in response, calling the incident “unacceptable,” but did not exercise his ability to sanction the USAC members responsible.

That wasn’t a question of speech. It was a clear violation of Title VI of the Civil Rights Act and, in no uncertain terms, an example of anti-Semitism. The UC, however, provided no substantive response. No punishment was handed down to the council members and they ended their terms with their stipends intact.

It’s a wonder why the regents claim to stand against bigotry, but sat on their hands when faced with a clear instance of it. The UC, which officially authorizes USAC, would have been totally justified in sanctioning the council members responsible. Instead, the regents’ inability to act in any effective way communicated that anti-Semitic discrimination was permissible, as long as the perpetrators express regret after public outcry.

The fact that the regents addressed anti-Zionism specifically to make it seem as though they were concerned with protecting Jewish students, the very people they made little effort to protect when USAC members made national headlines for anti-Semitic discrimination, is more offensive than anything any student can say about ethnic nationalism. The final document states that efforts to discredit candidates for University leadership positions “based on bias or stereotyping should not go unchallenged,” but this doesn’t change policy or protect students like Beyda from future incidents of discrimination.

This statement and the drawn-out process that produced it were, simply put, poor efforts by the regents to pat themselves on the back for producing a toothless document that will do nothing to shield students from racism. Granted, there’s no simple way to prevent students from spray-painting a swastika on the wall of a Jewish frat house and not all acts of bigotry are as obvious as what USAC did last winter. But the UC could at least evaluate its shortcomings when faced with the task of dealing with discrimination on its campuses rather than penning ineffectual statement after statement.

Racist speech is a problem that no statement or policy can eradicate overnight. But punishing clear-cut instances of discrimination is a far simpler and more important task to undertake than offensive speech. The regents need to learn to deal with discrimination without making themselves look incompetent before they can handle more abstract problems.