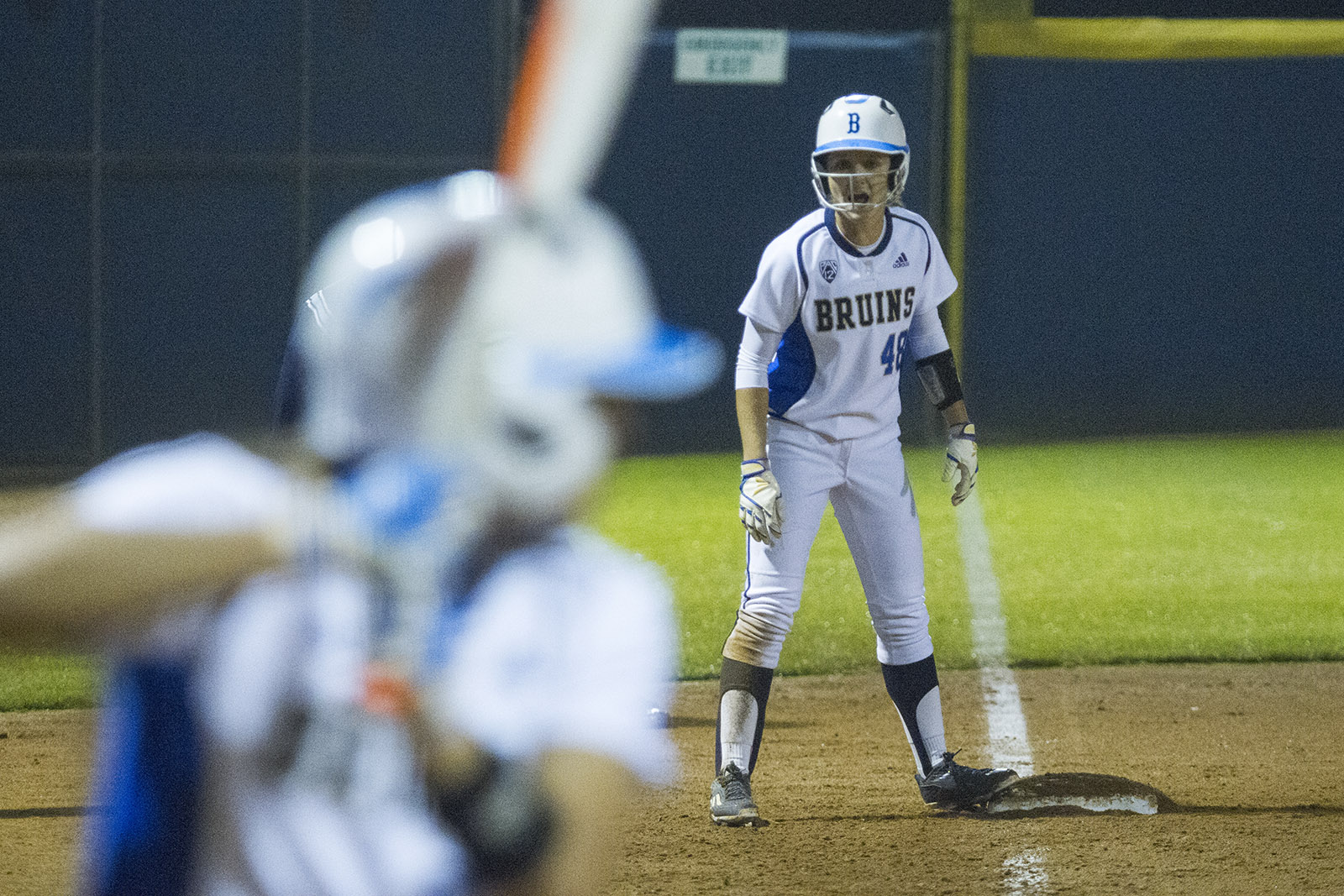 Allexis Bennett was surprised at the call her coaches made when she stepped up to the plate in the bottom of the seventh inning. They were all telling her to swing away.

Normally, it is Bennett’s job as first in the lineup to slap the ball and just get a base hit. It works well – the senior center fielder is fast and beats the throw to first more times than not. And in situations where there are runners on base, it is her responsibility to advance her teammates.

Tied two-all with one out in Saturday’s tilt with Syracuse, Bennett thought she was going to do just that, as freshmen Zoe Shaw and Paige Halstead stood on first and second.

Power hitter and junior shortstop Delaney Spaulding was up next, and UCLA softball’s leadoff hitter just wanted to advance Shaw and Halstead without drawing the double play, giving Spaulding a chance to end the game.

“I was not prepared for what my job was. I was more going to put the runners on second and third for Delaney, ’cause Delaney got the hit prior that inning,” Bennett said. “Then (assistant) coach Kirk (Walker) gave me the sign, ‘You know what? Swing your stick. Let’s see what we got cause we know Delaney got you behind your back.'”

Assistant coach Lisa Fernandez had been working with Bennett recently on expanding her game to hit with power in situations that required it. This was the perfect opportunity.

With the count not in her favor, Bennett took a deep breath, swung the bat and made contact, sending a line drive to left field. The ball bounced and hit the wall. The damage was done: a walk-off double. Bennett’s teammates rushed out to meet her at the plate to celebrate the win.

It was the highlight of a weekend that saw significant improvement from the Bruins, as they found the consistency they’ve been looking for for over a month. UCLA (13-8) finished the Stacy Winsberg Memorial Tournament weekend 4-1, with its only loss coming against No. 12 Florida State.

“I definitely believe we got better through the weekend,” said coach Kelly Inouye-Perez. “The pitchers are just getting better which is building confidence and the offense is getting those critical hits.”

It was the loss to the Seminoles that echoed the Bruins’ recent struggles. In that game the team recorded three errors and sophomore pitcher Johanna Grauer allowed nine hits. UCLA’s bats were silent as well, but FSU starter Jessica Burroughs had a standout performance, throwing a no-hitter through six innings.

The rest of the weekend went much better. UCLA mercy-ruled two of its five opponents – Charleston Southern and UC Davis – and posted good wins against UC Santa Barbara and Syracuse.

Besides the FSU game, Grauer had a strong weekend from inside the circle. The sophomore looked more confident, hitting her locations and mixing it up with off-speed pitches. Although she didn’t have that many strikeouts, she gave batters trouble.

“A lot of the way I have been doing is attributed to (sophomore catcher Madeline Jelenicki and I) communicating more and just be on the same page,” Grauer said.

Sophomore pitcher Selina Ta’amilo had mixed results from the weekend. Her best performance was against the Guachos, throwing six strikeouts, but she also gave up seven hits.

UCLA has one more tournament before the start of Pac-12 play on March 19.