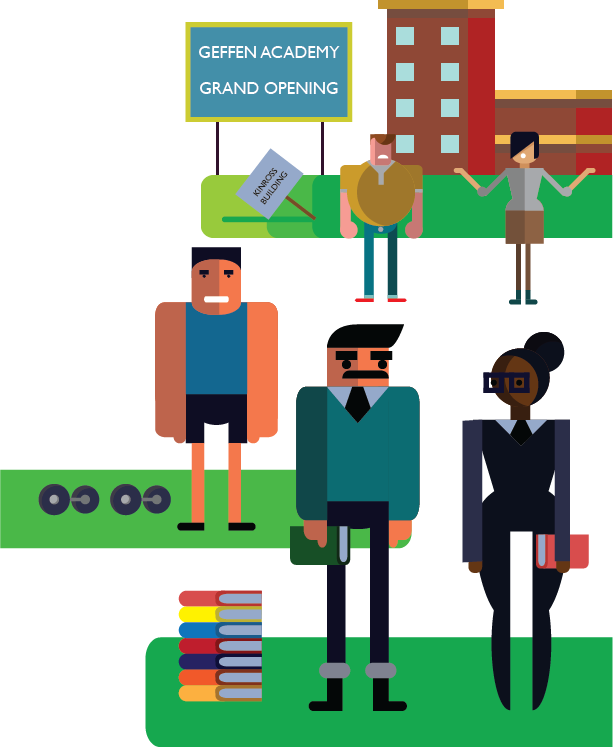 To date, the Geffen Academy at UCLA continues to defy my expectations. But not in a good way.

The Geffen Academy is a secondary school being developed by UCLA for middle and high school students of the UCLA staff and the LA community. It is being funded by a $100 million donation from businessman David Geffen and will be housed in the Kinross Building, displacing facilities such as a graduate student gym, a lab and several administrative offices. The academy is to begin its admission process this fall.

Intrigued by the logistics of developing the Geffen Academy, I attended its public scoping meeting, expecting a large group of Westwood residents and people affiliated with UCLA. I had also read on the meeting’s description page that there would be an opportunity for public comment, so I came in thinking the audience’s suggestions and questions would be responded to and answered by the UCLA officials.

Little did I know that I was expecting too much.

The large crowd I anticipated turned out to be nothing more than a meager group of about 30 people who barely filled the small hall. The various attendees all appeared to be satisfied with sitting quietly and keeping their thoughts to themselves, though the one exception was Tracy Dudman, the senior planner at UCLA Capital Programs. Incidentally, Dudman happened to be the one conducting the meeting.

Aside from those who were content with listening to the droning sound of the room’s air conditioning machine, several mustered up the courage to ask questions, but most of those were either shrugged off with a simple “We don’t know yet,” or sucked into the void that was Dudman’s notepad. Needless to say, it was quite an uneventful night. Perhaps that’s why the meeting, meant to be two hours long, lasted only a little over 40 minutes.

The scoping meeting is just another example of how the administrators of the Geffen Academy have failed to communicate well with the UCLA and Westwood communities about the details of its development. The administration needs to be more proactive in disclosing more information about the academy’s development, specifically about where the occupants of the Kinross Building will be relocated to, and needs to come out with a timeline early on for when it will be able to provide definitive answers to the public’s questions.

The administration’s communication with the public thus far has consisted only of a vague, congratulatory email from Chancellor Gene D. Block sent out in November, a website that echoes Block’s email, a scoping meeting that did very little to convey useful information to those who attended and a 95-page Draft Initial Study about the impact the academy’s renovation of the Kinross Building will have on the Westwood environment and traffic.

The administration’s lack of effective communication raises, among other things, the important question of where the current occupants of Kinross will be relocated to.

The answer to this question is important because the occupants of the Kinross Building, including the Kinross Recreational Center, or KREC, the UCLA Library Conservation Center, the Fowler Museum at UCLA and the Office of Intellectual Property, have to be given appropriate space in facilities on and off campus.

Relocating the residents of the Kinross Building is by no means a trivial task. Many of the current occupants have called Kinross their home for upward of six years, and shifting them will take a good deal of effort in not only securing spaces in other facilities, but also in transferring their resources to those spaces.

She added that the Library Conservation Center’s new location would require a great deal of space in order to house the large pieces it interacts with, such as the 36-square-foot portrait of Arthur Ashe it currently houses. In addition, Metzger said the new location would also need access to sunlight, which is a requirement for conservation centers, in order to interact with paintings.

Adding to these requirements is the issue of how space is a very limited commodity at UCLA. Metzger also observed this, stating that finding a large enough space on campus for the Library Conservation Center would prove difficult. Yet, despite these requirements, Metzger said that no communication has been made between the administration and the Library Conservation Center about its relocation in the past three months. She hopes the center will be relocated by the end of the summer, but the fact that she has not received any direction reflects poorly on the administration’s ability to communicate with its constituents.

In an official statement, UCLA stated that the Geffen Academy is still early in the planning process and that more research needs to be done before a timeline for the Kinross occupants’ relocations can be developed. It also added that occupants of the Kinross Building will continue to receive updates from their department heads and will receive many weeks’ notice before the eventual move.

Additionally, there is little harm in disclosing information earlier in the planning process to the public and the Kinross occupants. Coming out with a timeline early on for when it will be able to provide specific information to the Kinross occupants about their relocations and when it will be able to definitively answer the public’s questions allows the community to better accommodate the changes that will take place. Leaving them in the dark until everything has been finalized only serves to complicate the relocation process.

Considering the Geffen Academy is to be approved by the UC Board of Regents in September and will begin its admission process in the fall, it is only in the administration’s best interest to disclose specific details earlier in the planning process.