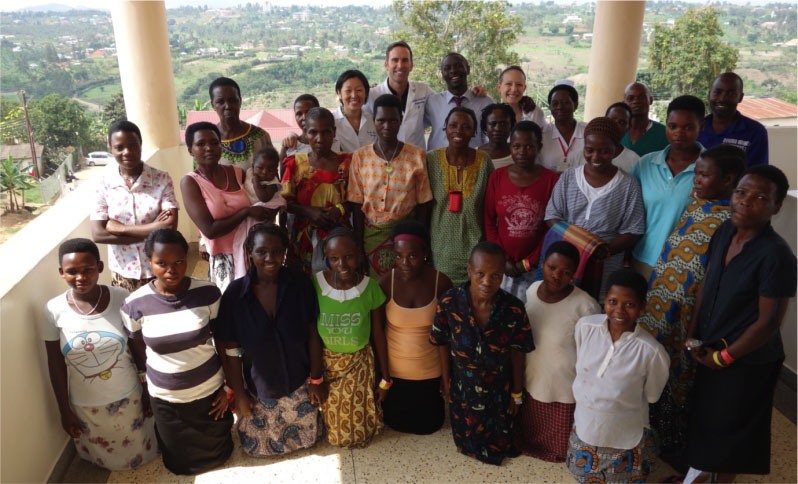 Every year, a small city in Uganda transforms into a center of free surgery for patients who suffer a painful, unusual complication from childbirth – a hole torn between the birth canal and the bladder or rectum.

Since 2009, Christopher Tarnay has traveled to Uganda for two weeks each year with a team of eight to 12 UCLA doctors, nurses and residents who perform surgery to repair obstetric fistula.

Obstetric fistula, or vaginal fistula, results from a physical blockage during childbirth that prevents the newborn from properly exiting from the pelvis. Obstetric fistula leads to incontinence, an uncontrollable leakage of feces and urine from the body, and often results in social isolation.

Some travel hundreds of miles on foot or by taxi to be treated by UCLA surgeons, said Tarnay, division chief of female pelvic medicine and reconstructive surgery at the Ronald Reagan UCLA Medical Center.

A nonprofit organization called Medicine for Humanity, or MFH, fundraises throughout the year to cover patients’ surgeries, meals and postoperative care, which cost about $200 per patient. Every year, Tarney and his team operate on more than 40 patients at the Mbarara University of Science and Technology’s teaching hospital, stationed 180 miles south of Kampala, Uganda’s capital.

Obstetric fistula is a common complication of childbirth in developing countries but rare in the U.S., Tarney said. Patients who show signs of obstructed labor in American hospitals undergo a cesarean section, an operation rarely performed in Uganda because its hospitals lack the resources, facilities and trained personnel necessary to accommodate the level of need, he added. Local hospitals in Uganda don’t prioritize people who suffer from fistula for medical care.

“The need for care exceeds the ability to provide care,” Tarnay said. “We say that it’s not obstructed labor that causes genital fistula – it’s obstructed access to health care.”

When Tarnay first set foot on Mbarara hospital grounds in 2009, his patients slept in small beds within tents left behind by a disaster relief operation. In the program’s early years, surgeons operated in rooms with no ventilation or power, and rotated operating tables so the patient’s body could face the window for light, Tarnay said.

The facility first evolved into a ramshackle collection of sheds and walkways, and later a multistory building that trains more than 20 residents today.

Anne Ackerman, a fellow in obstetrics and gynecology, said the Ugandan site lacks much of the medical technology she is familiar with. Hospital gowns are woven from cloth and laundered for reuse after each surgery, and patients must provide their own meals and bed linens, she said.

Ackerman said that patients’ family members often stay with them during their treatment, cooking and caring for them during their recovery periods. She once witnessed a little boy share food with his sister and his mother before having some himself.

“(The community) provides things we take for granted in American hospitals – meals, water and blankets if you get cold,” she said. “It was really amazing to watch the community come together and take care of each other in a way that doesn’t happen here.”

One of the team’s primary goals as caregivers is training and supporting the next generation of Mbarara hospital physicians, Tarnay said.

Third-year residents at the UCLA David Geffen School of Medicine can work at the Mbarara hospital to satisfy their global health requirements. Tarnay’s team also communicates with doctors in the Mbarara hospital every two weeks, allowing his team members to assist them over long distances, he said.

Musa Kayondo, a Ugandan doctor, films local TV and radio commercials to inform people about the team’s services. Tarnay said the Mbarara hospital is becoming a recognized center for gynecological care in Uganda, and doctors as far away as Ethiopia have heard about the clinic.

Fourth-year psychobiology student Pooja Parameshwar, the first nonmedical volunteer to travel with the group, has seen firsthand how patients benefit from their surgeries.

“These women were all looking forward to going home and spreading the word … that fistula was not, in their words, ‘a decided fate,’” said Parameshwar, who manages MFH’s social media operations. “It was incredible that we could offer something they could take home, that we could change this silent issue.”

Tarnay said he hopes to bring anesthesiologists, pediatricians and other medical professionals to Mbarara in the future, and extend the travel opportunity to medical school students.

“Educational and cultural exchange is very important,” he said. “They look forward to us coming, as we look forward to going. We see (them gain) hope that they can get their lives back to where they were before.”