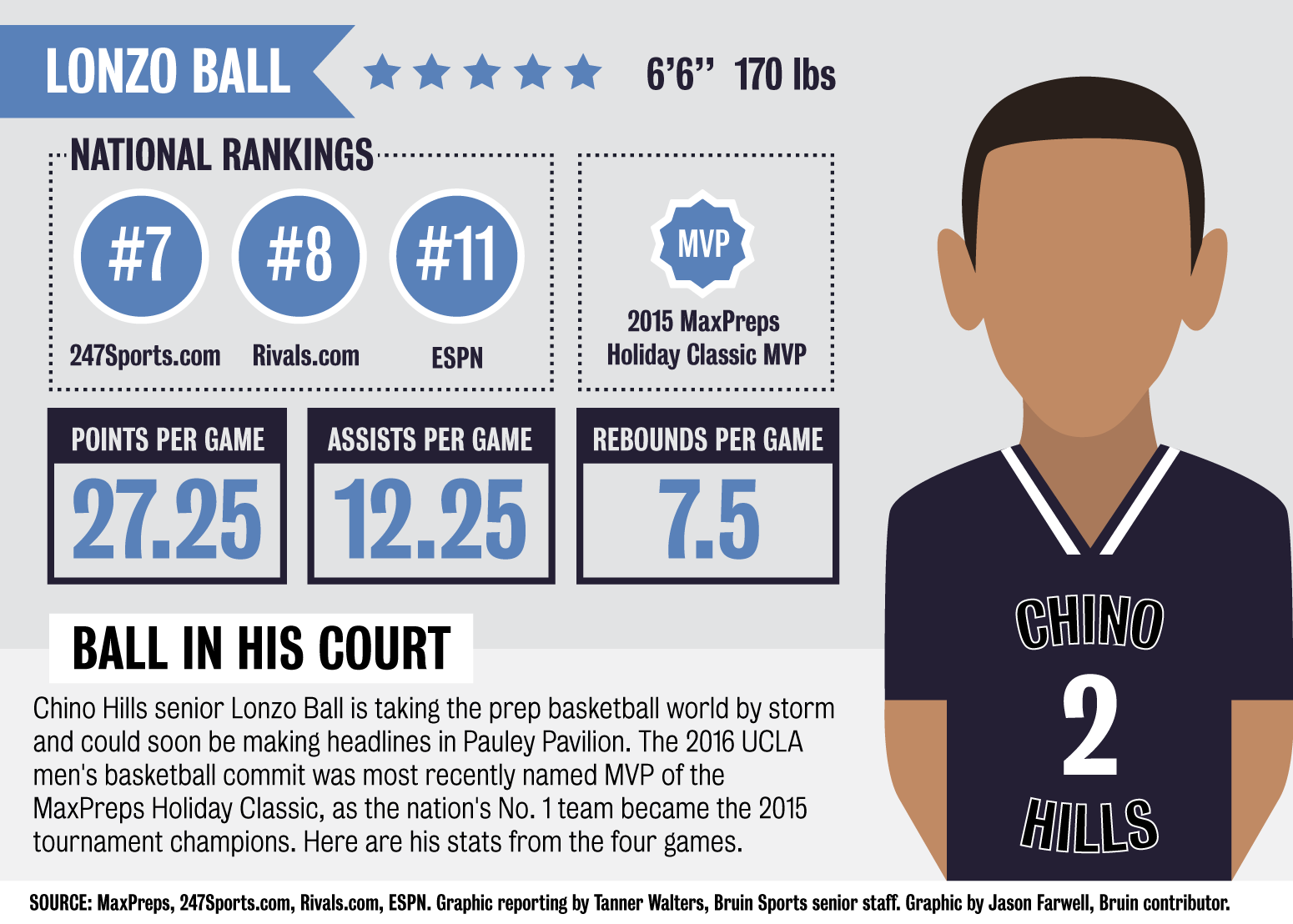 The UCLA sports universe slowed down for the past three weeks, as Bruin players and coaches took a break from the daily grind of collegiate athletics. Besides a number of men’s basketball upsets – and major letdowns – all was quiet.

And then Lonzo Ball decided to make some noise. A lot of noise.

The 2016 men’s basketball commit spent the final weeks of 2015 at national tournaments, as Chino Hills competed in the City of Palms Classic and the MaxPreps Holiday Classic. With the help of two more Ball brothers, LiAngelo and LaMelo, Chino Hills upset then-top-ranked Montverde Academy on its way to the City of Palms title.

Then, leading the newly crowned No. 1 team in the nation, Lonzo Ball garnered MVP honors in the Holiday Classic while Chino Hills demolished every team in its path.

Now, high school statistics are far from an exact science, but minor discrepancies in stat totals make no difference when it comes to the oldest Ball brother: He is becoming one of the most dominant and complete players in the entire 2016 class, nationwide.

“I’ve seen pretty much all the best high school guards in the West Coast since the ’70s and he’s right up there with all of them, with Baron Davis, Jason Kidd, guys like that,” said long-time basketball writer and scout Frank Burlison. “He’s probably more like Kidd than any of them in that he impacts the game in so many ways – certainly as a passer, which is probably his biggest strength – but also as a shot blocker (and) rebounder.”

The star passer averaged almost 30 points per game in the final tournament of 2015, accomplishing an “effortless” quadruple-double in the championship win over Redondo Union, as Desert Sun columnist Shad Powers described it.

“He’s like Magic Johnson but plays defense. Like Steph Curry but with an urge to pass it,” Powers wrote. “Like LeBron but without letting his emotions get carried away. Like Scottie Pippen but with better ball skills.”

“He’s terrifically athletic and explosive,” Burlison said. “His range is almost like what Tracy Murray or Reggie Miller’s range was in high school or college, and he adds the element of being so creative with the ball.”

Chino Hills’ program as a whole is impressive in its own. Every game is a shootout, a highlight reel occurring live in front of your eyes. Hundreds of points later and you’ve got a stat sheet headlined by Chino Hills in triple digits and highlighted by the Ball name everywhere you look.

LiAngelo, a junior, and LaMelo, a freshman, often have even higher stat totals than their older brother, garnering talk of the “Ball Brother Dynasty” everywhere they go. Oh, did I mention that they’re all committed to become Bruins – even LaMelo, who hadn’t played a minute of high school basketball before he gave his verbal? What a coup, Steve Alford.

But this is about Lonzo Ball – this is about the showstopper, the playmaker, the guy who can captivate Twitter with a single vicious dunk or jaw-dropping stat line.

And there’s no reason to expect the highlights to stop anytime soon.

If you’re not paying attention to the local prep team, it’s time to do so.

The fireworks will continue in full force this week as Chino Hills takes on Foothills Christian for a Saturday night showdown. Fellow 2016 commit T.J. Leaf – also ranked in the top 15 nationwide – will counter the Ball brothers and their high-flying offense in a battle of the soon-to-be Bruins.

The future is now. And it’s a whole lot of fun to watch.