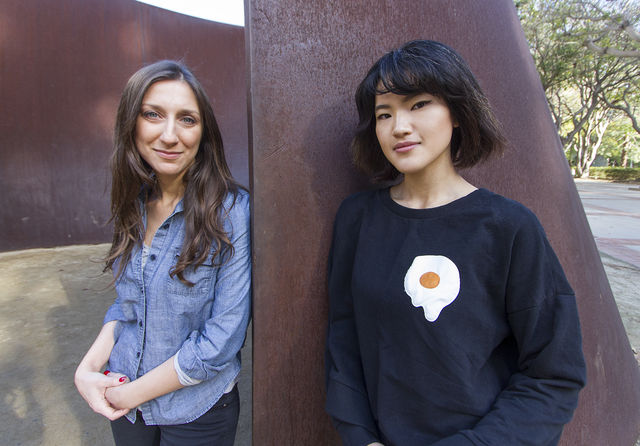 Fourth-year art history student Canan Cem turned a page of her Andean textiles textbook, leafing through the glossy photos of pre-Columbian mantles, shawls and tunics woven in bright reds, browns and eggshell blues. To her, the items were flat, two-dimensional – they belonged only to the collection of PowerPoint slides her professor presented in lecture.

As part of the class, Cem went on a field trip to the Los Angeles County Museum of Art costumes and textiles department. She gazed at the frayed edges and still-vibrant colors of the textiles, which became three-dimensional before her eyes in their exhibit. Soon after, the textiles became a familiar reminder of history as she worked in the galleries for the LACMA curatorial fellowship to which she was accepted.

LACMA is one of five American art museums participating in the Andrew W. Mellon Foundation’s undergraduate curatorial fellowship program. The program, whose second class of fellows was announced early December, aims to expose undergraduates identifying with minority backgrounds to fields in museum leadership such as curating and conservation. This year, both first-year LACMA fellows are UCLA students.

After applying on a whim, Cem was first accepted to a week-long summer academy where each of the 15 students accepted was required to choose an object from a selection from the museum’s permanent collection to research and write an object label for.

The process of choosing the objects was competitive, Cem said, with popular or well-known artworks going quickly and more obscure objects remaining neglected. In the end, no one else wanted to conduct research on a hollowed, dark Mayan pottery vessel, so Cem accepted it and began to research its history.

Compiling information on the ancient object was difficult for Cem. She enjoyed the challenge of the research, however, and decided to apply for the fellowship after the summer academy ended.

As first-year fellows, Cem and Audrey Min, a third-year art history and history student, shadow curators in separate departments and assist in brainstorming and designing parts of exhibitions. Since September, Cem has been working in costumes and textiles and Min in Chinese and Korean art.

Min said because of her interest in the Asian-American cultural niche, she has been able to discover certain pieces in the department that speak to her.

In the galleries, she came across a 1996 piece by Roy Lichtenstein, titled “Landscape with Boats,” that resonated with her Asian-American heritage.

Lichtenstein was an exponent of Pop Art during the ’60s and ’70s and had a strong interest in traditional Chinese ink painting and landscapes. In the mid-1990s, Lichtenstein created his own iteration of landscapes in his signature dot style.

“(The painting is) this really beautiful expression of cultural syncretism between East Asian artwork and American interpretation and learning,” Min said. “It’s a really awesome piece for people to take a look at and see these cross-cultural, cross-temporal connections.”

Hilary Walter, the LACMA and national coordinator for the undergraduate curatorial fellowship, said guaranteeing a more experience-based route to expose underrepresented populations to the curatorial field will hopefully increase representation of different cultures and heritages in art.

Walter cited an example of Franklin Sirmans, the ex-head curator of LACMA’s contemporary art department, who researched and featured the works of artists of color during his tenure at LACMA. Sirmans, an African-American curator who is now director of the Pérez Art Museum in Miami, curated an exhibition of African-American artist Noah Purifoy at LACMA before his move to Miami.

“Recognizing people of color can basically put artists of color on the map and tell their story within art history, because some of the stories haven’t been told,” Walters said.

Walter said curators, as the keepers of collections, grant their exhibitions certain voices through the connections they make with the different objects in a collection.

Because of the subjectivity behind creating an exhibition, Min believes curators must be aware of the variety of people and experiences that make up society when showcasing art to the public.

In the future, Min would like to be a curator focusing on marginalized groups, people of color and people from the lesbian, gay, bisexual and transgender community to diversify the experience for audiences.

“The role of a curator is this invisible hand that (the viewer is) not really aware of, directing the way they see things,” Min said. “(Curators need) an awareness of the variety of people that make up a society and to not focus on general representation.”