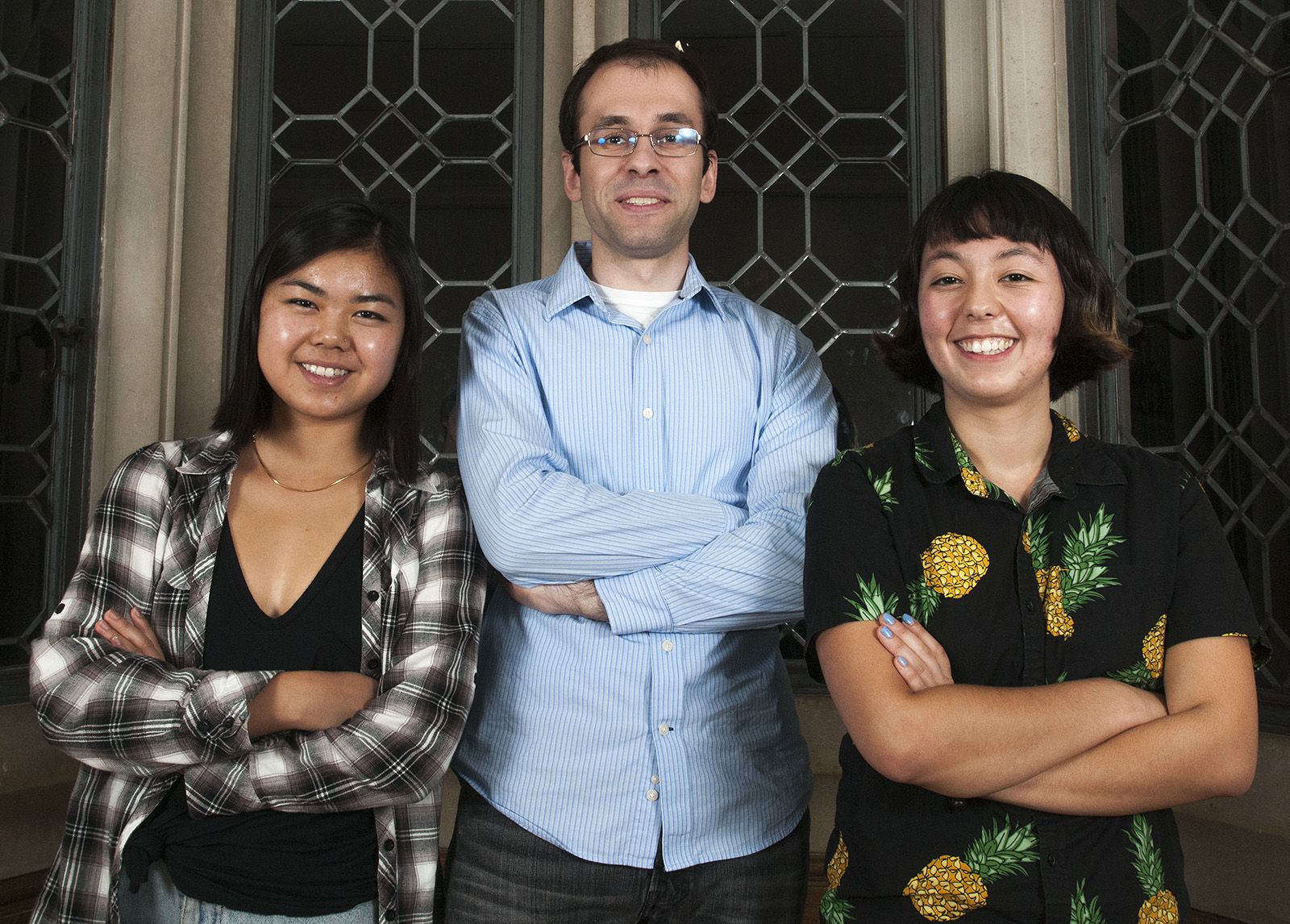 A crowd of 13 spectators huddled around a painting, Njideka Akunyili Crosby’s “And We Begin to Let Go,” hung on the dimly lit wall of the Hammer gallery. It was a larger crowd than usual.

It is rare to see more than one UCLA student at a museum activity, said Weiwen Balter, a Hammer student educator and second-year sociology and political science student. Despite the low turnout, student educators are still motivated to share their knowledge of art.

Every Sunday, UCLA students facilitate 30-minute “conversations” between two pieces of art of their choosing in a program called “Art in Conversation.” Balter chose Crosby’s “Janded“ and Rembrandt van Rijn’s “Juno” because the differences in these artworks bring up questions about gender, ethnicity and their 250-year age difference.

Students serve as the main gallery educators, leading public and private tours of the galleries and assisting with curator walk-throughs. Art in Conversation allows student educators to be creative in structuring a tour, said Audrey Brown, a student educator and third-year geography and English student.

In these free-form tours, student educators engage in open dialogue with museum visitors by exploring potential common themes and differences between the two works. The student educators research, design and conduct the tours completely independently.

Martin Spasov, fifth-year history and French literature and language student, said the dual component of teaching and research is his favorite part of the job. He uses his research to give visitors context for the specific artworks in hopes of enhancing their understanding so they can create meaningful connections with the artwork.

In return, he learns a new perspective on a particular work of art every time he gives a tour.

“I am supposed to teach them but I end up walking away learning so much because each person has totally unique interpretations,” Spasov said.

For instance, Spasov said a museum visitor commented that Jessica Jackson Hutchins’ “Book of Hours” looked repulsive and disgusting and that she could not believe it was art. By the end of the talk, they came up with an interpretation of this piece together.

“The piece is titled ‘Book of Hours,’ which is an illuminated manuscript from the Middle Ages that is very beautiful to look at,” Spasov said. “(Hutchins) titled her piece ‘Book of Hours,’ so we concluded that it was about a spiritual sickness of modernity.”

Art in Conversation usually has one to 12 visitors and creates an intimate environment that appeals to student educators. Spasov said these smaller groups lead to meaningful discussions between group members.

Brown and Spasov said they cannot help but notice that there is a lack of participation from UCLA students in museum activities.

Balter said the people who attend the Art in Conversation program are mostly retired or partially retired people who have time to spend a Sunday afternoon at a museum, and younger people are occasionally in attendance.

Spasov said he believes that people see museums as boring, intense or a waste of time, which prevents more UCLA students from coming to the program. Brown said she thinks the low turnout of college students has to do more with students’ busy schoolwork schedules.

Brown added that although the Hammer is close to campus, some people perceive the museum as being far from campus because it is all the way on Wilshire.

Jamie Millman, a part-time art ambassador at the Hammer, began attending the Art in Conversation program at the end of summer. She said these art programs are not like the programs she attended when she was young; when she was in her early 20s, she felt isolated in her passion for art because there were no museum docents her age.

She said she loves the freshness and youth of the students teaching art.

“Even though I’ve been around the art world for 40 years, I’m constantly learning,” Millman said. “It’s an endless cycle with art.”

“Looking at art with other people, it doesn’t feel like a job, it’s amazing,” Spasov said.