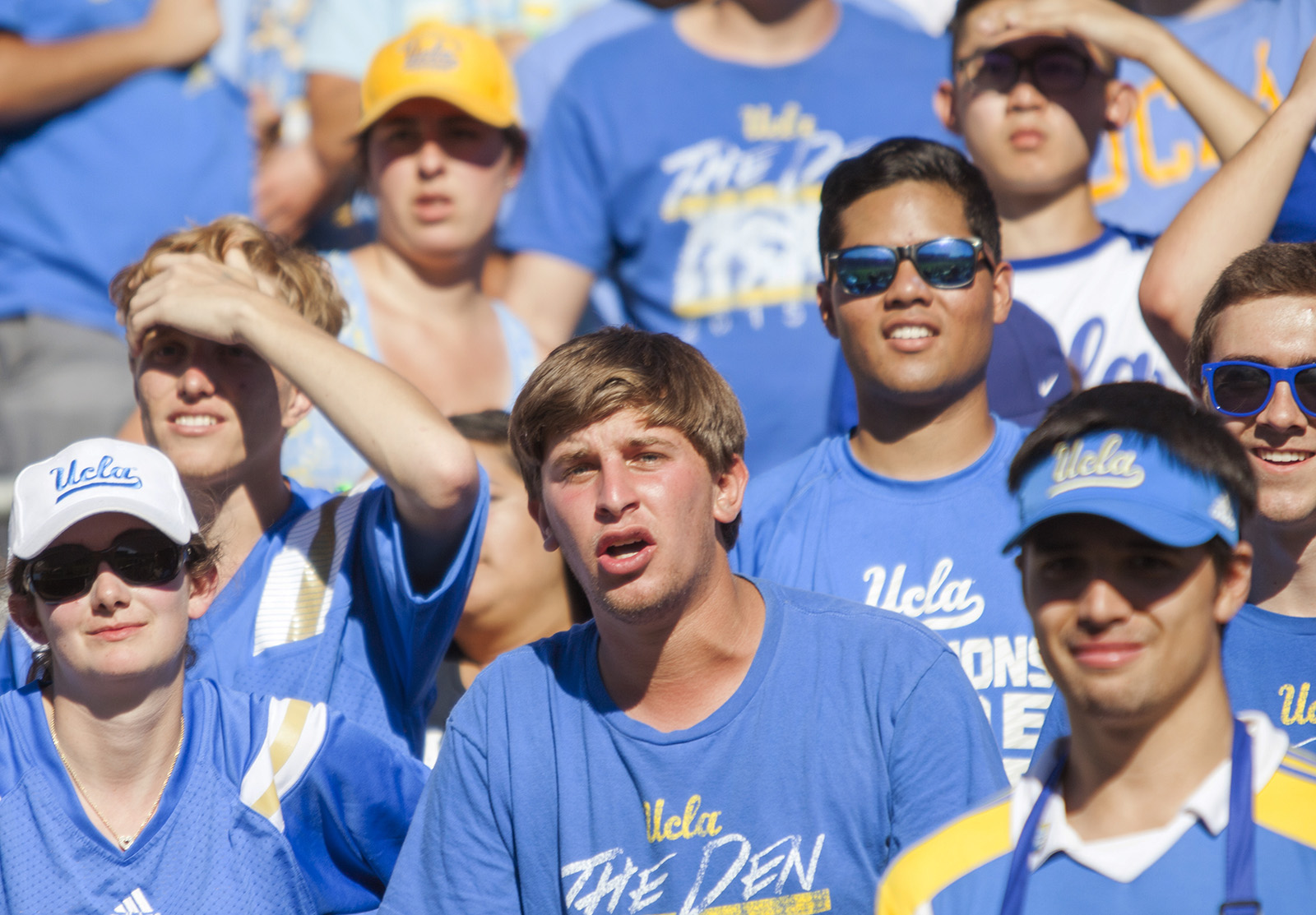 UCLA students at the Rose Bowl were forced to deal with the sun on Saturday, as the Bruins took on the Colorado Buffaloes in a game starting at noon. (Daniel Alcazar/Daily Bruin senior staff)

Jim Mora may not control the weather, but he might as well in my world.

After Saturday afternoon’s uncomfortably close victory over the visiting Colorado Buffaloes, the UCLA football coach took a moment to complain about a different discomfort bothering his team: the sun.

And with a noon kickoff time that featured sweltering 90-degree heat at the Rose Bowl, Mora had plenty to say.

“We played a gazillion plays and it was 1,000 degrees and we’re standing there facing the sun for some reason. Of course we were hot,” Mora said. “I turned around one time and put my back to the sun and said, ‘This is like a 10-degree difference with the sun at my back opposed to my face.’ Hell yeah, they were fatigued.”

These off-script moments in the postgame press conferences are where Mora shines. He cracks a joke, and ravenous reporters scramble to write it down, post it and bask in the online clicks. Even when he immediately clarifies that he’s teasing and “couldn’t care less,” the words have already gained lives of their own.

Case in point: I heard about this from the front page of ESPN.com. Front page, really?

Nonetheless, the coach still brought up a good question.

“We’ll figure that one out sometime, why we’re facing the sun,” he said. “I don’t know why. I’m sure someone could tell me.”

The answer seems pretty simple upon further review. Athletic programs face an interesting economic and practical dilemma that is most commonly solved by ultimately penalizing home teams across the nation.

Student sections at football games are vitally important to the whole experience, and schools rightfully understand this. Therefore, to get the largest contingent of crazed students packed into their seats, ticket prices are brought way down and students are given some of the worst seats in the house.

Those sunshine seats would have nothing to do with the home team’s bench, except for the fact that Pac-12 policies prohibit schools from putting the student section behind the opposing bench. If the home team were to switch to the shady side, the student section would have to move, too. With these factors in play, UCLA football ends up suffering the same fate as its die-hard fans.

So, coach Mora, as one of those thousands of sweaty, sunburnt – very, very sunburnt – fans, I would like to extend a big thank you. Sure, I know you were mostly joking, but before this day I was resigned to my miserable fate facing the sun. Then it dawned on me.

If anybody can save me from the sun, it’s Jim.

Is he actually going to do anything to make a change? Probably not. But a glimmer of hope exists. He is one of the few individuals with enough influence and sway to make UCLA move heaven and earth – and the sun, too – to appease him.

Maybe we’re in the clear this season, with El Niño looming and a so-called “cold front” sweeping through Southern California, but I’m fully on board with any sort of seating change going forward. Sweaty, hot and sunburnt, and certainly on board.