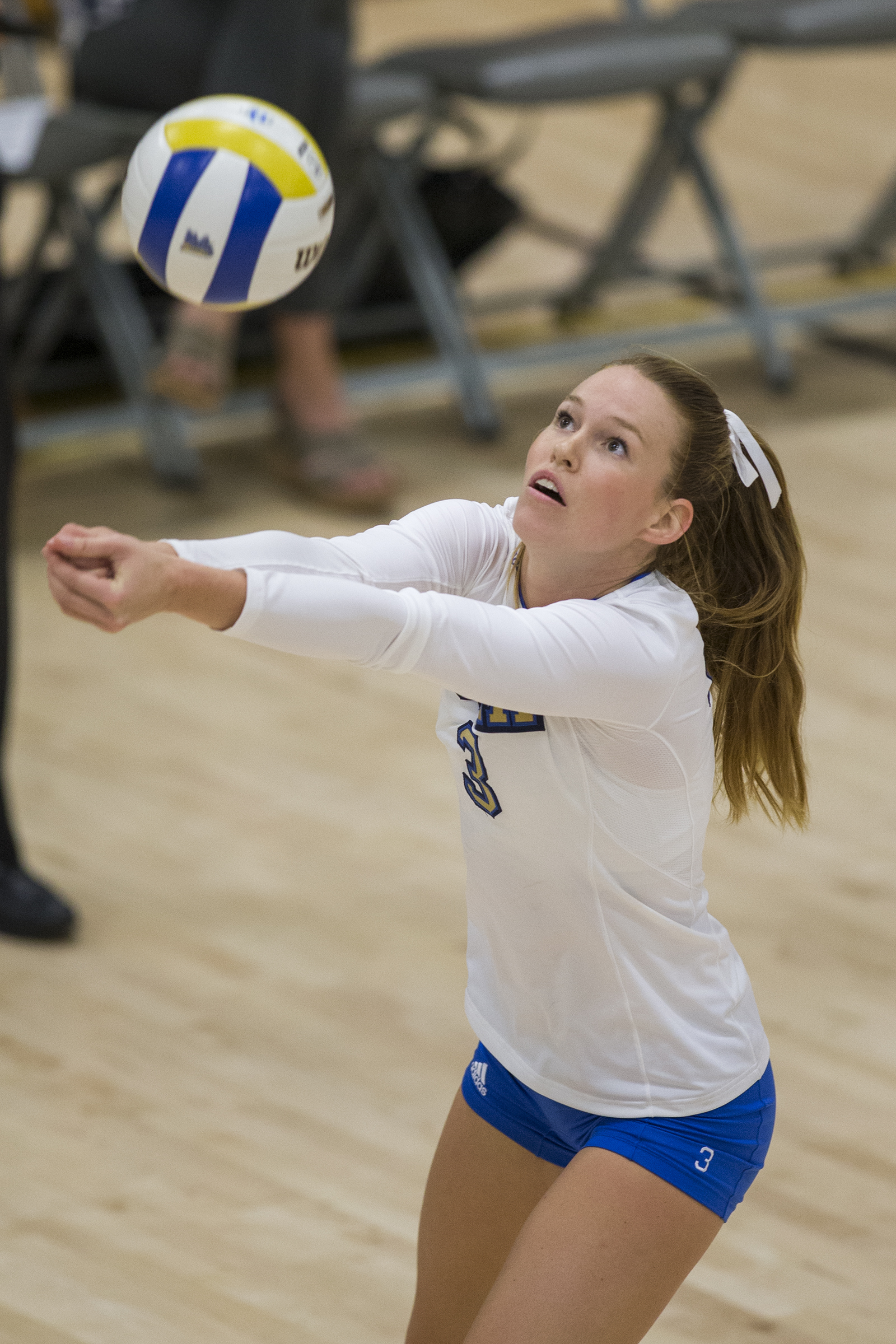 Sophomore outside hitter Reily Buechler led the Bruins in kill with 17 in the 3-1 loss to Washington. (Aubrey Yeo/Daily Bruin senior staff)

Sunday presented an important opportunity for the women’s volleyball team.

After beating Washington State 3-1 on Friday, No. 8 UCLA could have taken sole possession of second place in the Pac-12 with a Sunday victory over No. 5 Washington. Instead, an already-tough matchup with the Huskies was made more difficult by a lack of contributions from two of the Bruins’ best players.

With starting setter Ryann Chandler sidelined by injury and leading hitter Jordan Anderson failing to record a kill, UCLA (18-4, 9-3 Pac-12) had its eight-match win streak snapped, falling 3-1 to Washington (20-2, 10-2). With the 1-1 weekend, UCLA dropped to tie with Stanford for third place in the Pac-12.

“We know that Washington is the team to beat,” said sophomore outside hitter Reily Buechler. “They just beat USC in three on Friday and they obviously are one of the top teams in the country and we wanted to beat them badly.”

Instead, Sunday’s attack was led by Buechler with 17 kills and redshirt sophomore outside hitter Jessyka Ngauamo, who replaced Anderson, with 12.

“Whenever you come off the bench, you kind of have to get going,” Ngauamo said. “The team really helped me. They let me know what was going on on the other side of the net and made me feel comfortable on the court.”

Freshman Zana Muno was in at setter for the entirety of both weekend contests. Chandler, the Bruins’ normal starting setter, did not join the team on this road trip after being hit in the head by a ball during last weekend’s road trip.

After dropping the first set to the Huskies, the Bruins threatened with an intense win in set two. With the score tied at 24, Muno ended one of the longest rallies of the match with an overpass kill. The Bruins won 26-24 to tie the match 1-1, but could not carry the momentum into game three, in which they lost 25-15.

“Volleyball is a game of runs,” said coach Michael Sealy. “In volleyball if you fall asleep for three minutes it can turn into an eight point run. It’s just part of the game.”