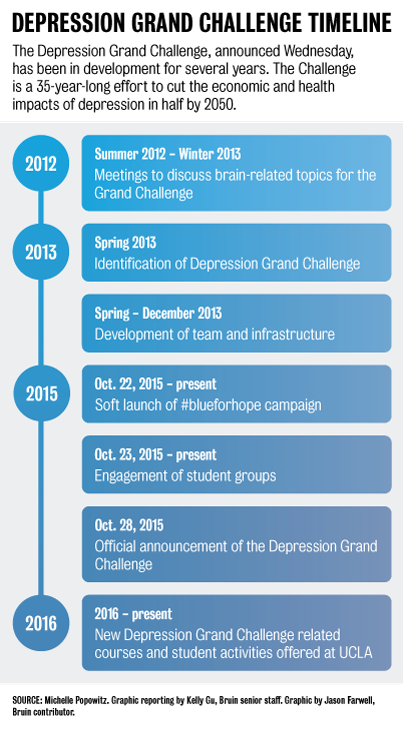 UCLA researchers launched a 35-year project Wednesday that aims to decrease the global economic and health impact of depression by 50 percent by 2050.

The Depression Grand Challenge initiative will be the largest UCLA research initiative thus far, with an anticipated budget of $525 million for the first 10 years, according to the statement released. More than 30 faculty members began developing the initiative in 2012.

“We decided not to just address something of intellectual interest,” said Dr. Nelson Freimer, director of the Center for Neurobehavioral Genetics and a psychiatry professor at UCLA. “We’re addressing a really large societal problem.”

Freimer said this year’s Grand Challenge will include seven pilot studies that aim to take multifaceted approaches to reducing depression rates, ranging from genetic testing in fruit flies to a 100,000 person clinical study.

Several different methods will be used to measure the impact of depression, Freimer said. He added that the leading contributor to disability in many countries is depression: People can’t work, go to school or carry out their normal activities. By measuring the time loss caused by this disability, researchers can track their progress in bringing down the depression rate in the community.

Another unfortunate but important metric is suicide, Freimer added, which is the second leading cause of death among young adults. The team hopes to significantly decrease suicide rates in the local community within the next 15 years.

Diseases of the brain are inherently more complex than diseases of the body, Freimer said. Depression does not have objective markers to identify it like cancer and heart disease do, and mental disorders are still taboo, he added.

“If I look back to when I was in medical school or training to be a psychiatrist, people really didn’t talk about their depression at all,” Freimer said. “The millennial generation is more open about depression than previous generations, but there’s still a long way to go.”

Michelle Craske, director of the Anxiety and Depression Research Center at UCLA and an executive committee member of the Depression Grand Challenge, said one of the main goals of the challenge is to work with younger students and take a preventative approach to depression. The clinical team will survey students who are 18 and older, and eventually incorporate younger teens.

“When we begin to understand the genetic contributions, we really begin to make breakthroughs in treatments for the disease,” Freimer said. “We’re no longer throwing a dart blindfolded.”

Although depression affects all age groups, Craske said the Grand Challenge team is particularly concerned about students. Young adults are at the age where depression is starting to show itself, she said.

“We’re not only trying to get students involved in research,” Freimer said. “We want students to increase the discussion about depression and spread the word about how important intervention is.”

Craske said students can participate in the clinical study, train as facilitators who work with individuals suffering from depression or advocate for the challenge on social media.

Popowitz dyed her hair blue to encourage students to wear blue and share news about the Grand Challenge on social media. The goal of the social media campaign is to remove the negative connotation from the meaning of the phrase “being blue,” she said. She added she hopes to create a group of student advocates called the Hopefuls who will share Grand Challenge developments on social media.

“Students are very open about what they observe on campus and their own personal struggles,” Popowitz said. “I never had a conversation like that in college.”