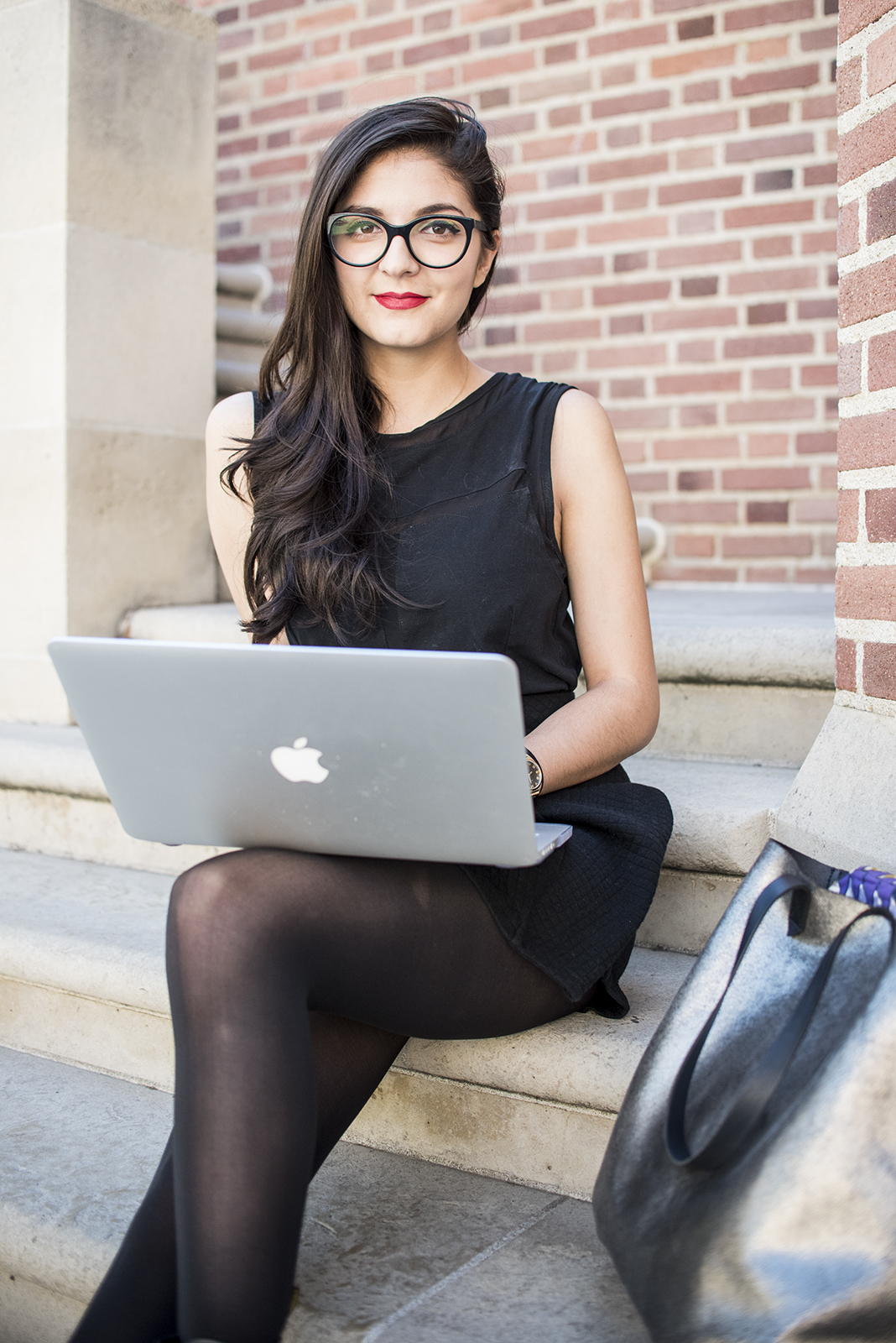 Fourth-year English student Vienna Celeste Urias runs her blog “Lady Like Mag” to crush gender stereotypes and promote feminism. She co-founded the blog, which has over 400 subscribers, with her friend Neelofer Lodhy.
(Julie Song/Daily Bruin)

Vienna Celeste Urias said proper and poised women sipping tea in the garden are what most people automatically imagine when they hear the word “lady-like.”

The fourth-year English student wants to crush these stereotypes about women in her online blog Lady Like Mag.

Her publication targets both female and male readers between ages 18 and 35, and has four major niches: art, fashion and beauty, music and lifestyle. Urias co-founded the blog in 2012 with a friend, Neelofer Lodhy, and now have about 400 subscribers.

The pair met while working for their college paper and was very passionate about journalism, Urias said. But they wanted to create something of their own – a magazine that would appeal not to just one interest, but to a multitude of interests of modern women.

For the blog, Lodhy works on music features and reviews, while Urias focuses more on fashion and beauty, Lodhy said.

“We both have our opinions throughout the creative process – but the great thing about co-owning a magazine together is that both elements of our desires can shine through,” Lodhy said. “(Urias) can do anything she wants, and she will.”

The name of their publication, Lady Like Mag, means reclaiming and rebranding “lady-like,” Urias said, and it is all about writing for a new generation of women that aren’t defined by gender stereotypes.

Fourth-year English student Natasha Cronin subscribes to the blog, and said she binge reads Lady Like Mag at least once a month because she enjoys a wide variety of articles, especially about music, and a focus on feminism of the blog.

One of her favorite articles, Cronin said, is about how to tie a necktie not just for your gentlemen, but for yourself as a lady who likes to wear ties. Cronin said she liked the article because it was different from what is being published in most magazines intended for women, such as Seventeen magazine.

As a gender studies student, Urias said she works on the new feminism-focused stories the most. She wants the blog to have articles that cover everything from women’s health and politics to issues on gender and gender identity.

Inspired by a documentary called “The Hunting Ground,” Urias is now collaboratively working on an article for her blog about rape culture on college campuses that will be published on Lady Like Mag at the end of this week.

“Having the Lady Like community is more than important to me,” Urias said.

Urias and Lodhy are working on upcoming stories, including exploring their national heritage, Urias said. The writers come from two different cultures: Lodhy is Pakistani and Urias is Mexican and French, so they plan to do segments about trying to get in touch with their culture.

“(Lodhy) is going to write about cooking with her mother,” Urias said. “And I’ve never been to a festival like Dia de los Muertos and I always wanted to do that because I got lost in touch with my culture.”

Urias said the most important thing she learned is that writing for her own blog is rewarding.

Urias said she and Lodhy are looking to expand and have “Gentleman Like Mag” some day.

“Our blog is extremely personal because we write about things that we are passionate about, that we love,” Urias said, “It’s always fun because in exploring yourself you can explore your opportunities and you can make sure that other people would do the same.”