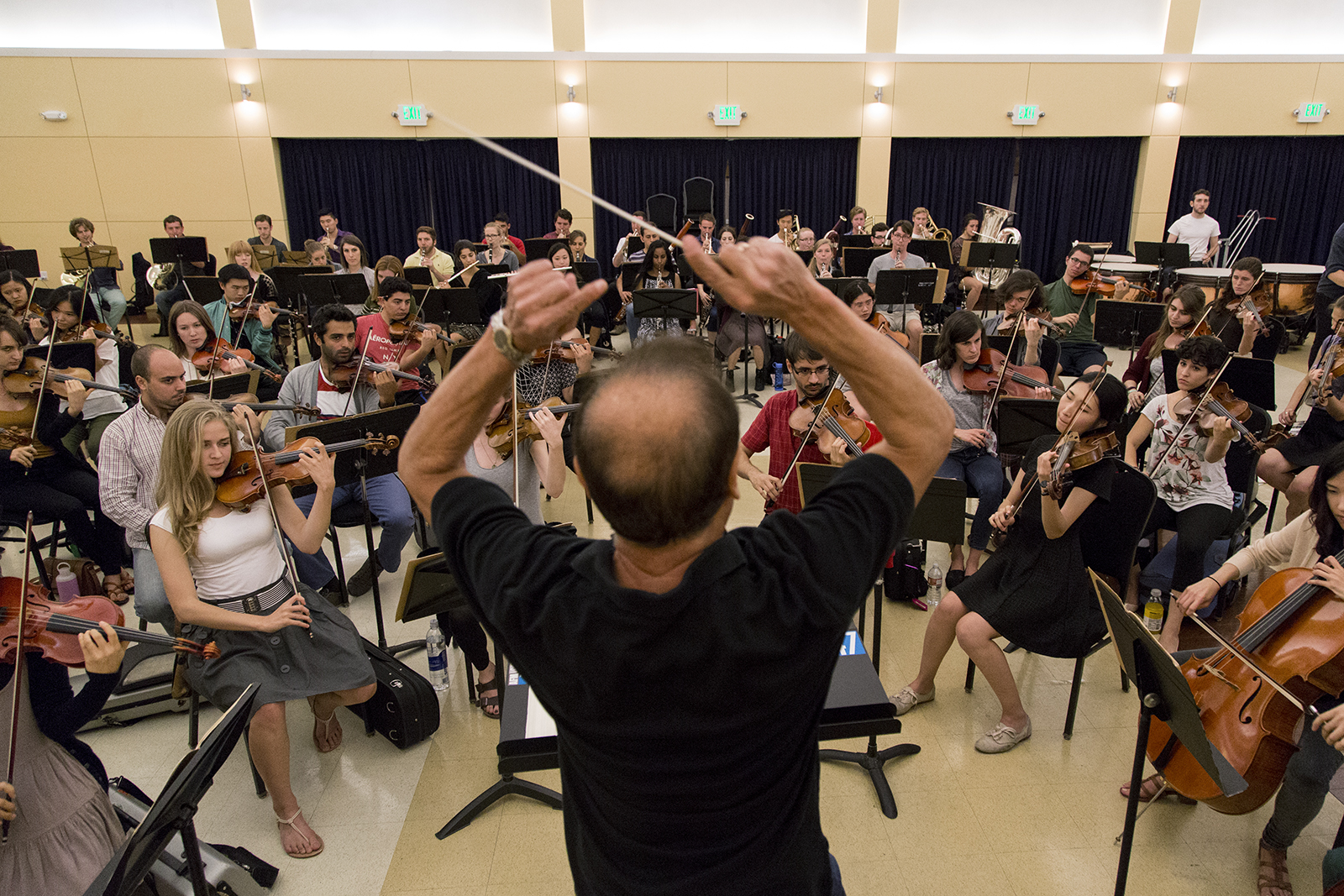 Jules Levy expected to hear conductor Alexander Treger briefly thank and dismiss him at the end of his audition for the Young Artists Symphony Orchestra.

Instead, as the double bassist finished his piece and exhaled with relief, Treger complimented him on his sound and inquired further into the make of the instrument.

“My jaw dropped a little – I thought, ‘Wow, who says that in an audition?'” said Levy, a third-year music performance student. “(The orchestra) is Treger’s baby, and he cares about each musician.”

The Young Artists Symphony Orchestra, a new ensemble formed by Treger, a former UCLA violin professor, will perform its inaugural concert in Royce Hall on Sunday. Treger said he created the orchestra to impart his skills and knowledge to a handpicked selection of musicians aged 15 to 26 looking to pursue professional careers in music performance.

Treger said conducting the ensemble brings his career as a UCLA violin professor and a professional violinist with the Los Angeles Philharmonic back full circle.

Treger performed many shows in Royce Hall as part of L.A. Phil. He said he is fortunate to be able to pass down his experiences, such as his decadeslong career as the L.A. Phil’s concertmaster and student of renowned violinist David Oistrakh, to his students in the place he knows and loves.

“I’m not coming back to Royce – I’m continuing being at Royce,” Treger said. “It’s been a sort of home away from home for me for 20 years.”

Treger said word of the new orchestra spread rapidly throughout the classical music community in Los Angeles during the initial planning stages, resulting in over 200 people auditioning for roughly 100 spots.

What ensued, Treger said, was a competition for seats culminating in a two-week showdown of high-intensity performances from wind, string, percussion and brass musicians.

While most of the orchestra’s accepted musicians are college students, Levy said some performers are still in high school.

Levy said the resulting dynamic between young artists who may have outcompeted older musicians is not one of competition, but of cooperation, since he said each artist brings a different playing style and a willingness to learn from other musicians in the orchestra.

After finding out his stand partner was 16 years old, Levy said he realized the importance of transcending age and focusing on the music instead.

“I expected to be one of the worst members of this orchestra, but that’s the best part – I get to learn from my peers,” Levy said. “Rather than focusing on the notes and trying to get it down in the hands, we’re on the way to making art.”

Levy said Treger expects his musicians to channel the emotion within the score by challenging them with difficult pieces. The orchestra will play Gustav Mahler’s Symphony No. 2 in C minor, a 90-minute orchestral work requiring a full choir in addition to a full 100-piece orchestra.

The magnitude and scope of Mahler’s Symphony No. 2, “Resurrection” expose younger musicians career bound for orchestral performance to the expectations of professional playing, said Henry Shin, associate conductor of the orchestra and a doctoral candidate in orchestral conducting at UCLA.

In addition to musicians learning and internalizing the written music, Shin said he hopes students pick up on skills rooted in the act of performance, such as helping musical dialogues flow between different instrumental sections.

“With all of this music, there are things that aren’t all written down – there are traditions that only happen while performing,” Shin said. “(The orchestra), in that sense, is a training ground for these musicians.”

For Levy, the orchestra is a sign of hope that he can succeed in landing a seat in a professional orchestra despite competing in a market where he said auditions to fill a vacancy open once every 20 years.

“The payoff is this: Every time I play a (piece) like (Mahler’s Symphony No. 2), I forget all those negatives and the ups and downs,” Levy said. “It’s worth it.”