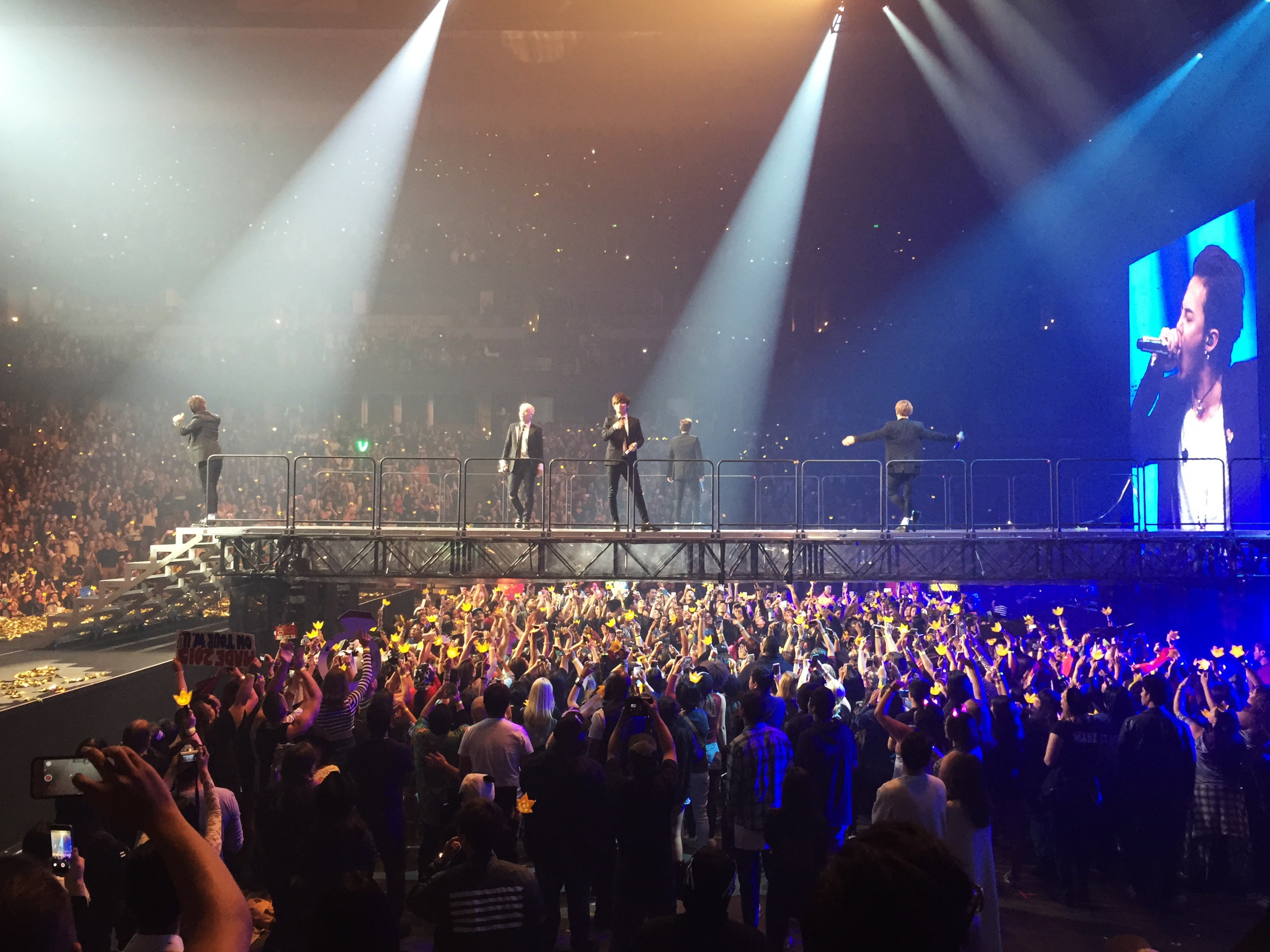 Big Bang went out Sunday with, well, a bang.

The five-member K-pop boy group closed off the two-night California leg of its world tour with a performance at the Honda Center in Anaheim. The tour marked the end of a three-year wait for international fans scattered across the world to see the group live, especially since promotion for the group’s latest album, “MADE,” hyped the new music up to greater heights.

Finally, the big day arrived. Crowds of fans, some rotating shifts with friends who had camped out the night before, clutched yellow crown-shaped light sticks, a symbol of the group. Concertgoers debated happily about which member was their “bias,” or favorite, as they patiently snacked, gossiped and waited in line.

As fans streamed into the massive space of the Honda Center, the group’s music videos were projected onto the big screen on the stage. Spectators didn’t need to worry about a low-energy audience – the screen time of members G-Dragon, Seungri, T.O.P, Taeyang and Daesung in the music videos alone was enough to get people in the VIP mosh pit to dance, especially when viral hit “Fantastic Baby” played.

The lights went dark, and the crowd and the stage erupted with noise and color as Taeyang bounced onstage in a classic black-and-white outfit to the trap beat of “Bang Bang Bang,” the third single from “MADE.” The only thing that could excite the audience more was the presence of fireworks, and the group delivered, transitioning into the bridge of the song with a dazzling display of pyrotechnics.

Keep in mind: It was only the first song of the night.

The pageantry of the whole show was mesmerizing – it was obvious no expense was spared. Fans watched enthralled as baby-faced G-Dragon riffed on a laser-shooting electric guitar and broke it behind him punk-rock style during “Tonight.”

While the elaborate props, projections and platforms could have been overwhelming, the audience couldn’t get enough of them. The impressive fan engagement created a palpable energy that allowed the five members to dance, laugh, sing and cavort around the stage for almost two and a half hours.

Each member had his own solo time, too. Taeyang performed the heartbreaking ballad “Eyes, Nose, Lips.” Tears glistened on fans’ faces as a background of storm clouds rolled behind the singer, accompanying the melancholy lyrics of a lost lover.

A highlight of the show was T.O.P’s laser-lit solo performance of “Doom Dada.” Dressed in a Mondrian-inspired suit reminiscent of his art-filled Instagram feed, T.O.P delivered each line flawlessly to the frantic beats of the live band, which gave a fresh rock flavor to the song.

Small moments of interaction with the audience and between the members made the experience more personal. In a moment of lighthearted banter toward the end of the show, Seungri dared Daesung to dance provocatively to the fans. Daesung obliged and began to seductively take off his bomber jacket, eliciting laughter from the audience, but quickly stopped, saying his mother was in the audience.

“Sorry, Mom – I’m not a bad boy.” Daesung said, turning to look for his mother, who quickly raised a large gold sign saying “We love you, Daesung!” Not surprisingly, many audience members swooned.

As the show ended after almost two hours with “Fantastic Baby,” audience members screamed for an encore. The members of Big Bang willingly obliged, but their exhaustion from the high-energy set list was apparent.

Even after two more encores, the crowd refused to let the members go, chanting its disapproval every time the members showed signs of ending the performance.

“I’m not sure when we’ll meet again,” Taeyang said in response to deafening roars to continue the show. “But I love you from the bottom of my heart.”