Concert Review: Empire of the Sun lights up Hollywood Bowl with psychedelic show 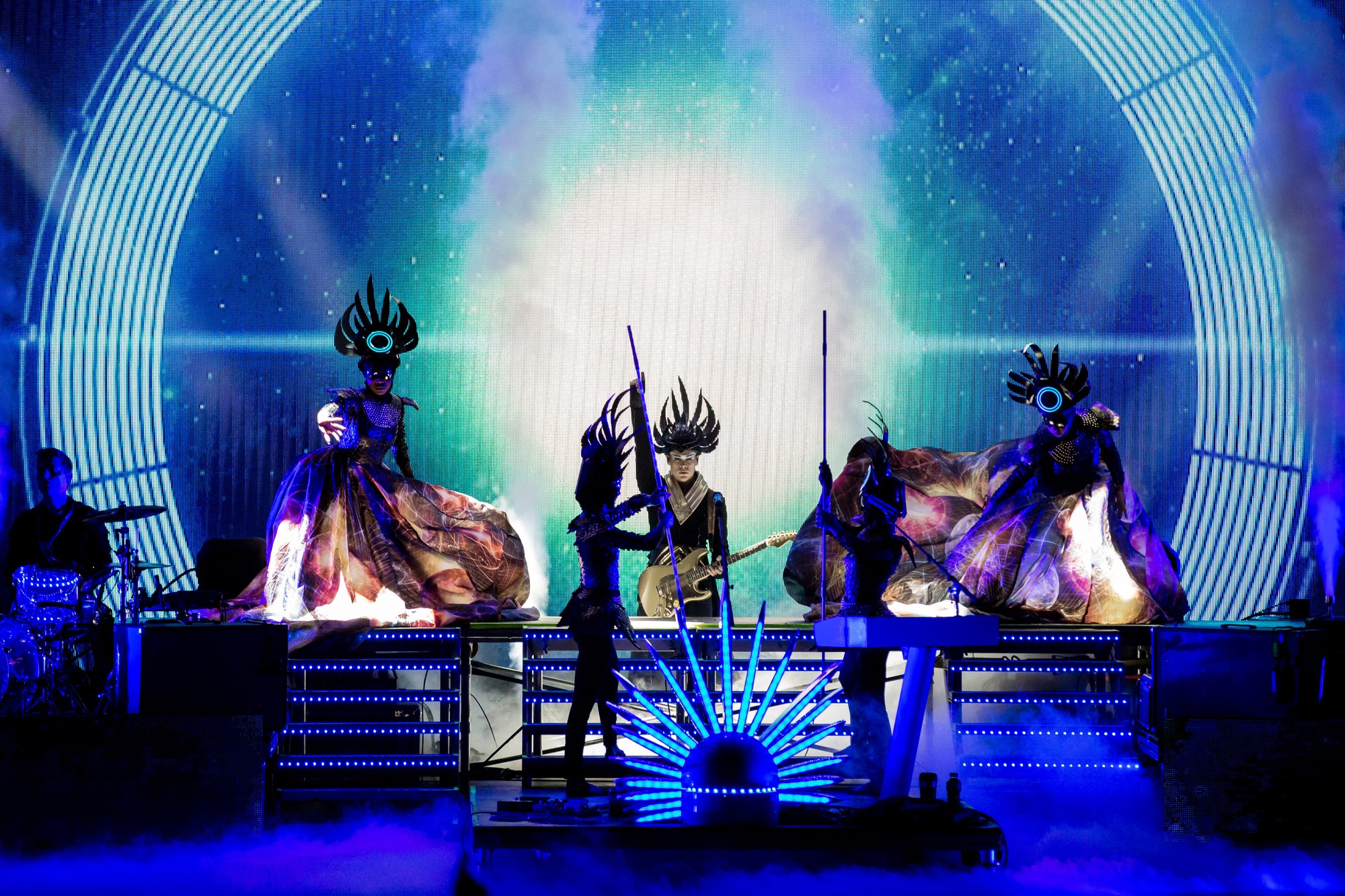 Empire of the Sun took over the Hollywood Bowl Sunday, changing it from a concert hall into a psychedelic playground.

The band, which has not put out a new song since 2013, started its tour in August and sold out its L.A. concert with opening act St. Lucia.

The elaborate, beautifully colored garb that pervaded their other concerts was nowhere to be seen in the audience, which was comprised of people of all different ages. One friend group decided to try wearing colored wigs, but they did not compare to the intricate headdresses others have worn to Empire of the Sun shows in the past.

At 7 p.m., before the sun had gone down, St. Lucia started his set with the song “Home” as people settled into their seats, some crowding around picnic baskets they had brought themselves. The vibe was neutral, the audience dressed as if the event were a classical music concert instead.

A wind machine and about 30 strobe lights behind and around the band provided the only effects for the opening performances. Each song had a different color scheme: Green and yellow lights synced with the beats of “Closer Than This,” while red and purple lights decorated the performance of “We Got it Wrong.”

Throughout the set, St. Lucia would call out for individuals to sing along, but received a meager response. After some audience members joined in, he ended “We Got it Wrong” by saying, “That was awesome, guys, thank you,” to the cheers of the crowd.

About 30 minutes after St. Lucia left the stage, mist began to take over the dark venue. Two people walked on stage, only distinguished by the lighted blue strips on their bodies and green circles on their faces. A picture of the sun erupted onto a huge screen in the background, and a seemingly tribal scene erupted with four dancers and three musicians.

Frontman Luke Steele, also known as the Emperor, wore strong blue eye makeup and a headdress. Colors radiated across stage as the screen showed different pictures and themes for each song, and sometimes a rainbow would project across the stage as the perfectly choreographed show took place. The dancers had costume changes with almost every song, becoming a mix of birds and astronauts and the stuff of fantasies, and never moving out of synchrony.

By the second song, “DNA,” almost the whole audience had stood up, staring at the aliens for guidance. A cult had formed, and the Emperor held all the power. At “Half Mast,” the screen behind the band showed a field of flowers and a tour of a planet that they had presumably just landed on.

The space theme continued with “Awakening” as Steele launched into high-pitched choruses. His voice switched pitches in an instant, giving him an androgynous quality. Understanding the lyrics he sings on his albums can be a struggle, and hearing them live makes them even more difficult to understand. His words slurred together, and the trippy spectacle on stage took over.

Throughout the show, Steele checked in with the audience and thanked them for the opportunity to perform. For “Walking On a Dream,” he went into the audience, taking pictures with some people before bounding onto the stage again, out of breath to the point that he had to stop singing.

The band ended the set with “Tiger By My Side,” and Steele smashed his guitar on stage until he broke it, embodying an ’80s rocker vibe. The stage went black and the audience stood back in shock. A few minutes later, though, they came back on with “Standing On the Shore” and “Alive,” and received energetic applause from around the Bowl.

Finally, the band thanked the crowd again and took a bow as credits came on the screen behind them. Their act had been a movie with every second filled with special effects. The crowd stayed, watching the credits roll and hoping for bloopers that never came.