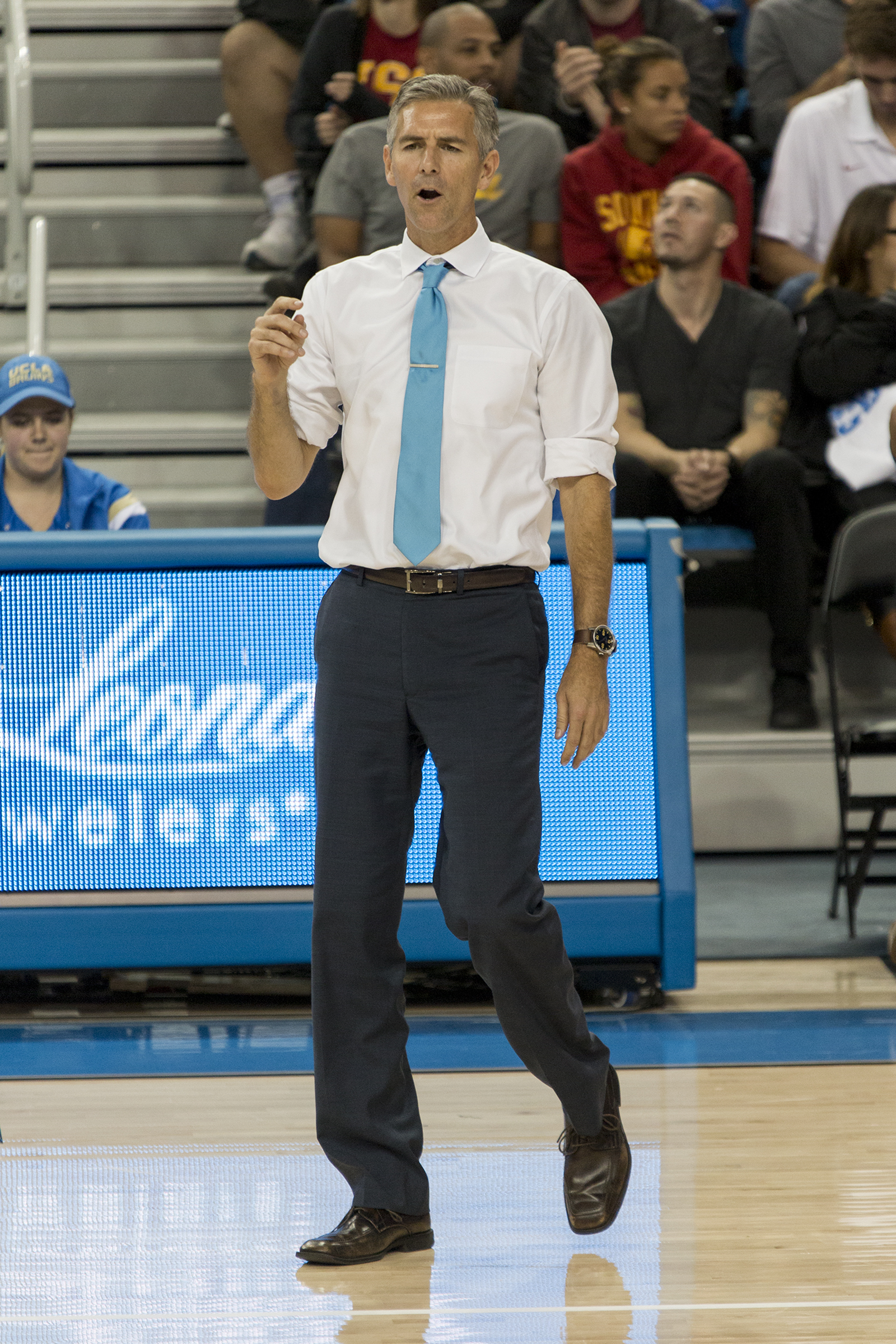 The UCLA women’s volleyball team split its opening weekend games against Virginia and Loyola Marymount. Coach Michael Sealy and the Bruins continue the early portion of the 2015 season in Hawaii next weekend. (Daily Bruin file photo)

The three-set sweep came as a bit of a shock to the No. 20 Bruins on Sunday night, seeming to indicate that the Loyola Lions have them pegged in recent matchups.

This is now the second year in a row the UCLA women’s volleyball team (1-1) has been upset by Loyola Marymount (1-1) – straight sets again.

“They were untouchable in the first set and the beginning of the second,” said coach Michael Sealy. “They served really tough and they were an amazingly scrappy, defensive team.”

The Lions came out aggressively amassing a 68 percent in kills in the first set compared to the Bruins’ 41 percent. Redshirt sophomore setter Ryann Chandler said the team was nervous, citing first-set tightness as the reason for poor killing percentage. She expressed that a lot of stress might have come from trying to prove themselves as top team in the country.

“I think we were like deer in headlights when we first came out,” Chandler said. “They run a really fast offense and I think we tried to do too much to match them when we should have just settled down and just played our game the whole time.”

“We just didn’t have any offensive rhythm with passing, setters and hitters,” Sealy said.

Heading into the second set,the Bruins slightly adjusted their play, having faith in their offensive system. Sealy said he knew that if they would just slowed down and remained calm that they would find their groove in the match.

“We steadied our passing a little bit, had a couple more crisp plays,” Sealy said. “We were able to beat their defensive speed, but we just weren’t good enough at our system volleyball.”

And for the second half of the match they did find their rhythm, causing close sets in the second and third, 25-23 and 29-27 respectively.

“Once we got the wheels back on the bus and we were playing decent enough volleyball, there were a few adjustments that we talked about on the bench that just never got made on the court,” Sealy said. “So we gave up a couple points late in both sets that we should have been smarter about.”

The late push for fourth set by UCLA was ended by a kill by LMU’s outside hitter Jamie Lea, then followed by an error from junior outside hitter Jordan Anderson to cut the comeback short.

Just a day before the match with Loyola Marymount, UCLA faced off against Virginia.

Saturday’s match was the complete opposite of what happened on Sunday, as the Bruins swept the Cavaliers in three sets. They would end up dominating in all categories, including kills, blocks and aces.

“Virginia was a lot slower in their game. They had a lot higher balls to the outside that we defended better,” said sophomore outside hitter Reily Buechler. “The pace really gave us time to focus our side of the net and control our game.”

The Bruins are now preparing for the Hawaiian Airlines Wahine Volleyball Classic which is set to begin next Friday in Honolulu.