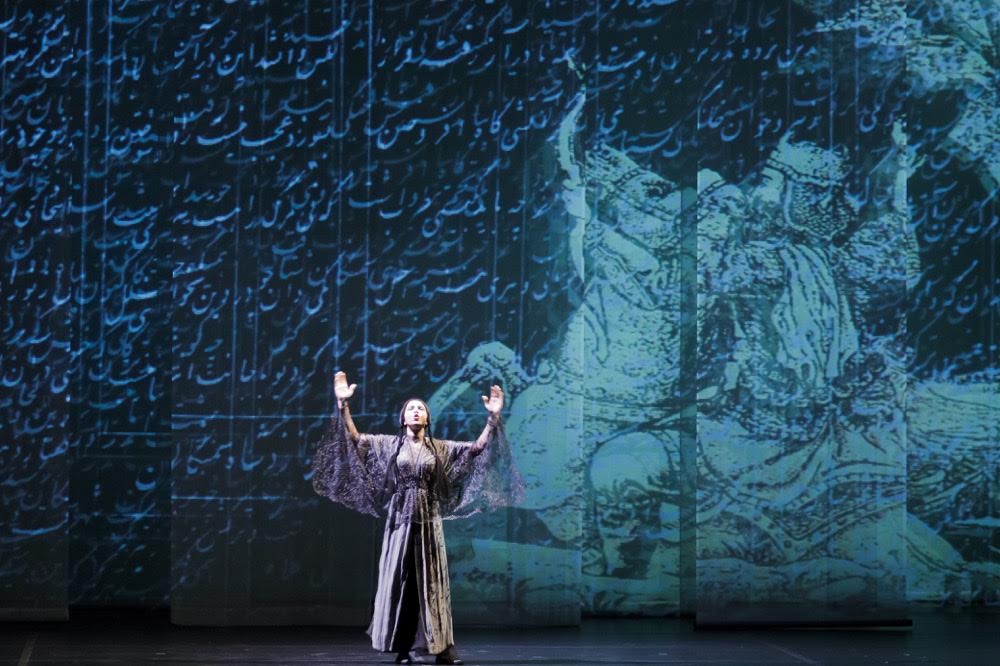 “The Scarlet Stone,” a multidisciplinary show based on an ancient Persian myth, was performed at Royce Hall Saturday. Performer Gordafarid is the first female to play the role of the storyteller. (Courtesy of Jim Carmody)

A Hercules-like hero and a rival princess secretly conceive a son, Sohrab, in an ancient Persian myth. Romance turns to tragedy when Sohrab is later killed by his own estranged father in battle.

This tale is the foundation of “The Scarlet Stone,” a multidisciplinary dance, music and poetry piece performed at Royce Hall Saturday in Persian with projected English subtitles. This performance blends old and new by mixing electronic and Iranian music, as well as combining an ancient myth with a modern poem. The two creators were inspired to modernize the tale by recent political and social changes in Iran.

A founder of the Persian Arts Society, Shahrokh Yadegari adapted, directed and composed “The Scarlet Stone” in collaboration with Iranian modern dancer Shahrokh Moshkin Ghalam, the choreographer, costume designer and performer of Sohrab.

The pair based the multidisciplinary concept of “The Scarlet Stone” on traditional Iranian storytelling, which Yadegari said occurs in front of paintings. In the show, animations and lighting serve as a technological version of the paintings.

“(Backdrops) change based on the energy and the vocals (of the) storyteller,” Yadegari said.

This form of storytelling is typically done by men; however, the storyteller in this performance was consciously cast as a woman, Yadegari said. Her stage name is Gordafarid, and she is the first female accepted by the traditional storytelling masters.

“We wanted to acknowledge the role of women in today’s world in the social-political world of Iran,” Yadegari said.

“The Scarlet Stone” is based on “Shahnameh,” written more than 1,000 years ago by an ancient poet known as Ferdowsi, to preserve the then almost-extinct Persian language. Yadegari said it brings together mythology and history to tell the story of Rostam and the love child he never met, Sohrab. When Sohrab discovers his father’s identity, his mother warns Sohrab not to be hasty to meet Rostam.

Yet instead of being cautious and wise, Sohrab rashly initiates a battle against Iran to fight for his beliefs, convinced his immortal father should have the throne. Since they had never met, Rostam doesn’t recognize Sohrab and stabs him in the fight – but then a stone on Sohrab’s arm, given to his mother by Rostam, reveals their blood relation.

“(The story is) about how young people become fascinated with specific ideals and they try to follow that,” Yadegari said.

The performance of “The Scarlet Stone” continues beyond the old myth, using dance and rhythmic language to incorporate a modern Persian poem by Siavash Kasrai titled “Moher-ye Sorkh” (Scarlet Stone), Yadegari said. Kasrai, who was involved in the 1953 Iranian coup d’etat and the 1979 revolution, talks about his own life in the poem. For example, he references political leaders enamored of ideologies – similar to Sohrab’s impulsive battle.

In the performance’s contemporary element, Sohrab meets the creator of “Shahnameh” to ask why he was quickly killed off in the story, when he was trying to do good.

“The writer’s answer is that ‘You chose to be a hero, you have to accept the consequences of a hero and do not whine. Be a hero and end the story like a hero,’” Yadegari said.

Yadegari said the message can relate to the Iranian revolution and social-political movements today, because the creator tells Sohrab the path of finding peace and justice must be taken with wisdom and not infatuation.

Afshin Mofid, who plays Rostam, said the tale can be interpreted as a genocide of generations: the old trying to subdue the young. Mofid said old fundamental Muslims are in power in Iran and attempting to control the young, who want to express their beliefs.

“(Moshkin Ghalam and I) wanted to work on a piece that not necessarily has a very strong political stand or ideal, but something that deals with the society’s problems of Iran and relevance to the political life,” Yadegari said.

Though the piece has since become more about the team’s artistic expression, Yadegari said Iran’s 2009 uprising over a presidential election was another impetus to the performance.

This uprising has reminded Yadegari of the United States’ Occupy Wall Street movement, because both involved a spectrum of people of varying ages, political beliefs and religions coming together to voice their concerns.

Parvin Javadi, a founder of the Persian Arts Society and producer of “The Scarlet Stone,” believes the story has always been relevant because the father kills his innocent son. In today’s chaotic world, she said, many innocent people are killed or wounded by forces like politics, power, discrimination and racism.

“What we hope is that our artistic piece becomes a symbol and a catalyst for constructive communication among people from various spectrums of society about issues in Iran,” Yadegari said.