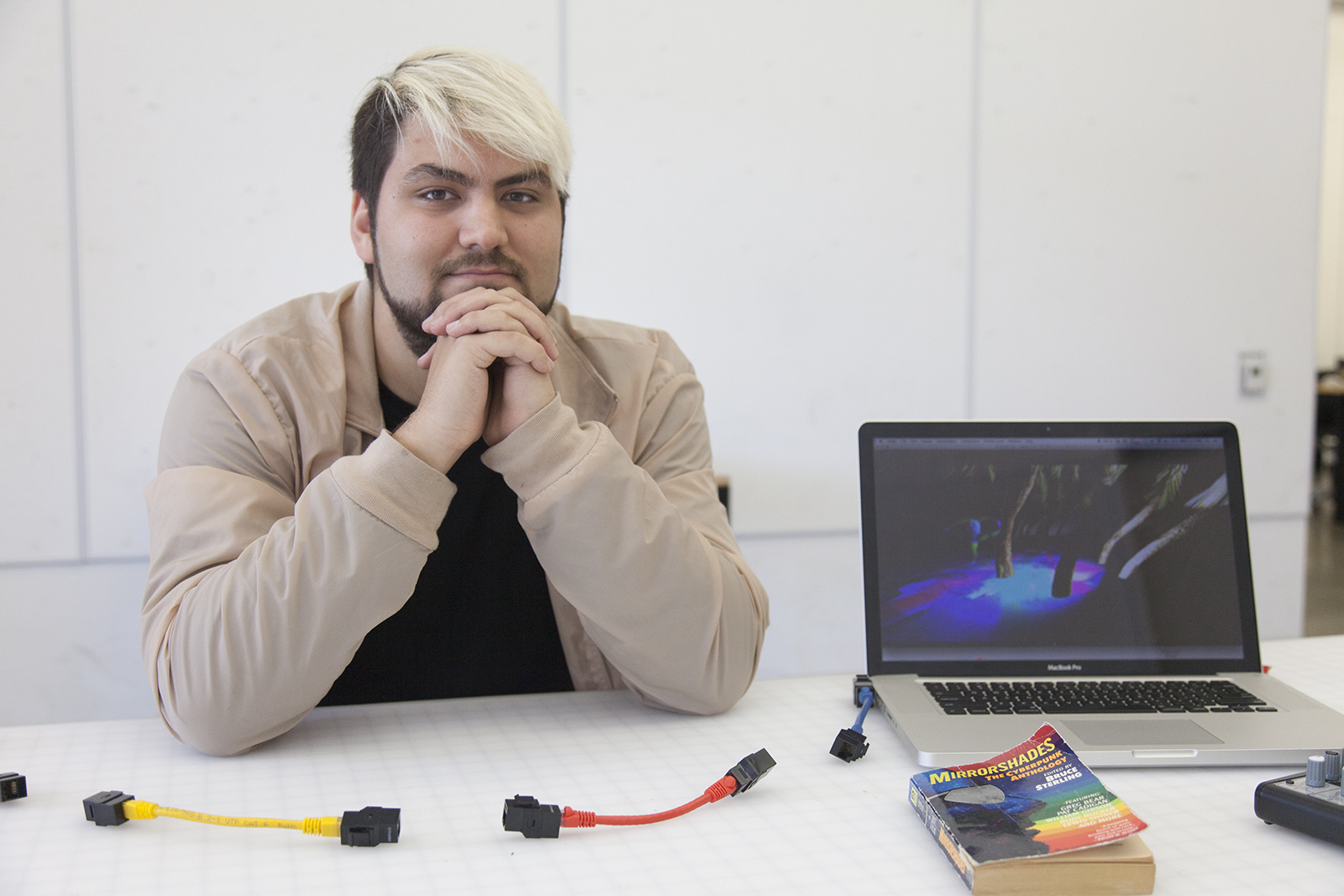 Fourth-year Design | Media Arts student Philip Scott will lecture on “game poems” on Thursday, focusing on the long history and relationship between poetry and video games. In contrast to video games, game poems are small, focused experiences, each only a few minutes long. (Hannah Ye/Daily Bruin)

The sky is dark blue, mixed with bright pink – almost the color of a television tuned to a dead channel. The player walks around as giant heads burst from a neon landscape. There is no score.

Currently untitled, this game is the longest of what fourth-year Design | Media Arts student Philip Scott calls “game poems.” Scott will lecture on game poems in the UCLA Game Lab on Thursday and their relationship to his work in the Design | Media Arts Senior Exhibition in June.

His lecture will focus on the long history and relationship between poetry and video games, which can be seen in text-based games, and the ways that certain poems can be understood as game instructions. It will also cover how game designers, especially student game designers, can make a successful, short game experience that mimics the structure and emotional response of poetry.

Played like normal video games, game poems are small, focused experiences, each only a few minutes long, which Scott said is more focused on creating a mood than on objectives and mechanics.

After moving through photography and traditional art media, Scott said he settled on games after taking an interactivity course. His work finds itself part of a new digital art wave that’s been gaining prominence over the past few years, with games like Ben Esposito and Yuliy’s “Room of 1000 Snakes” about a room filled with snakes.

Scott said that one of the key conceptual parts of game poems is making the player feel like the game is a physical part of an object. One piece will put the screen and controls for a game inside a sculpture made of dead computer server parts.

Though the current version of this larger, untitled project is barren and lifeless, Scott said he expects that will change when it’s exhibited. The game will remember the changes that players make to the environment, and they’ll be able to leave messages for each other, one at a time.

Scott said he often uses blank models that look like the default in many 3-D graphics programs. Scott said his figures often have longer limbs and older, wrinkled faces as compared to a “default.”

“I try to remove any sort of defining characteristic,” Scott said. “They’re all this singular, unidentifiable figure.”

Scott said he poses them in an unsettling, distancing way, distorting the figures in ways that only make sense in the virtual world, like decades-old movies with obvious computer-generated imagery that represents virtual reality.

Scott said the game poems, however, aren’t quite disconnected from the commercial world. Scott said he finds key influences in commercial games like the bleak landscapes in “StarCraft,” open-world simulators like “Proteus” and dystopian fiction, such as a worn copy of the cyberpunk anthology “Mirrorshades” that he keeps in his bag at all times.

“The goal of these pieces is to make you feel (like how) it feels to read a poem,” Scott said.